While the ceremony will be shorter this year, the Screen Actors Guild will still hand out its annual awards. The 2021 SAG Awards will air on Sunday, April 4, in a one-hour, pre-taped event, the show’s producers announced in early March. Hostless, and absent the normal banquet and red carpet, the shows producers have revealed that they still have a lot planned to honor the best actresses and actors of the year. I am very interested in seeing what the show will be and even more importantly what the fashion will be. With the abbreviated and pre-recorded show will the stars still turn out gowns and glamour? We will have to wait till Sunday night to find out. In the meantime let’s make a couple more wishes for what could be for this years show shall we? 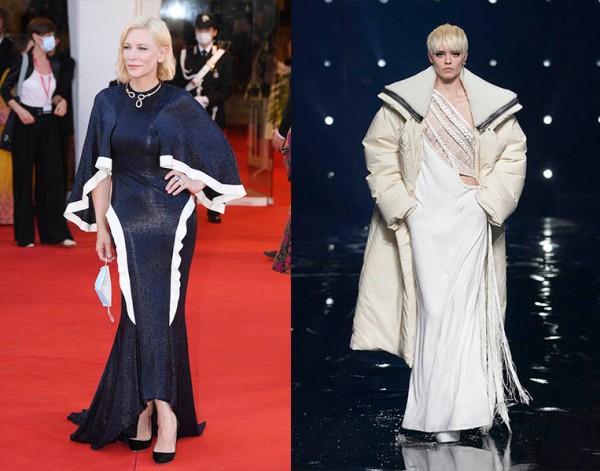 Despite all her nominations this season Cate Blanchett has skipped out on every single virtual awards show and I HATE it. I always love seeing Cate on the red carpet and I am missing her turning out looks. I’ve picked major looks from Alberta Ferretti, archive Armani Prive, and Lanvin and I am continuing that with the look I’ve picked as the must see moment for Cate to wear for the SAG Awards, even if I am doubtful that she will zoom into the ceremony. Cate has long been a fan of Givenchy and has worn looks from all of the brands creative directors. So I would love to see her try to sell me a look from Matthew Williams helm at the brand. I have been imagining Cate wearing this one shoulder white column gown which features a macrame detailed bodice and a tassel detail from the Givenchy Fall 2021 RTW collection. This collection is far from one I really love, but I feel like this gown modified to be lined for modesty (which I am sure will happen for retail) would be a super edgy glam moment for Cate. We usually love Cate more in her classic glam moments, but when she serves up edge I am in love with her looks. I obviously would ditch the coat and style this gown with a sleek updo, defined eyes, soft pink lips, a pair of white satin Aquazzura ‘Bow Tie’ crystal embellished pointed toe pumps, and statement aquamarine and emerald Chopard Red Carpet Collection 2020 drop earrings would make this a major fashion moment for Cate.

Elle Fanning is nominated with her fellow The Great cast members for Outstanding Performance by an Ensemble in a Comedy Series. After her super glam custom Gucci gown with Fred Leighton jewels at the Golden Globe Awards I am dying to see Elle give us a super glam moment for the SAG Awards. Now as she isn’t nominated individually or presenting I’m not sure that we will, but I definitely believe that if this were a normal year that Elle would have served up a MAJOR glam moment. I just fell in love with this white strapless beaded tea length cocktail dress from the Georges Hobeika Spring 2021 Couture collection which features sheer detail, 3D floral embroidery, and POCKETS. I feel like Elle with her classically glamorous sensibility would easily be able to sell this look to me. Cocktail dresses for the SAG Awards aren’t really a norm for me, but I think that with a sleek retro inspired updo, defined eyes, bold red lips, a pair of white Sergio Rossi ‘Sr1’ crystal studded square toe ankle strap sandals, and a dazzling white diamond Harry Winston teardrop and scroll detailed collar necklace would definitely elevate this look to the level of glamour needed for a major awards show red carpet.

Gillian Anderson took home both a Golden Globe Award and a Critics Choice Award for her performance as Margaret Thatcher in The Crown. That same performance has earned her a nomination for Outstanding Performance by a Female Actor in a Drama Series at the 2021 SAG Awards. She is up against her co-star Emma Corrin and I would say that it will most likely be Emma that takes home the Actor. Now in terms of fashion Gillian has exclusively worn Dior Couture this awards season. While I don’t hate her looks I also would love to see her branch out. I know Gillian has some fashion chops and I would love to see her give cozy glamour wearing this petrol blue knit Loewe Spring 2021 RTW long sleeve gown which features multicolored sequined strewn about, a thigh high split, and a knotted sash belt. While a knit gown is not something we would expect to see for any major award shows and I totally understand, but in lockdown I love the idea. Why not take advantage of it now? To make this look SAG Awards perfect for Gillian I would style it with a loose romantic updo, defined eyes, light pink lips, a pair of petrol blue crystal embellished mesh Gianvito Rossi ‘Rania 105’ pointed toe pumps, and dazzling white diamond London collection by De Beers ‘Thames Path’ teardrop cluster earrings.

There was a huge snub that the Golden Globes and the Critics Choice Awards didn’t nominate Michaela Coel for her performance in I May Destroy You. Well the SAG Awards rectified that and I am hoping that she will bring us a major look. I went through a lot of options when I was thinking about what I wanted to see Michaela wearing for the SAG Awards. Ultimately I decided to go with a customized version of this rose gold sequined Off White Resort 2021 asymmetrical slip style dress which features thin spaghetti straps and the brands name embroidered on the front. I would customize this into a floor length gown with a bit of a train to really make this a glamorous moment for the first time SAG Award nominee to wear for her first ceremony. I would style this custom gown with a short afro, defined eyes, ruby red lips, a pair of rose gold Sophia Webster ‘Rosalind’ three strap crystal heel metallic leather sandals, and simple yet dazzling 18k pink gold set Hueb ‘Luminus’ white diamond cluster earrings to really make it a MAJOR fashion moment for Michaela to bring to life on the “red carpet.” 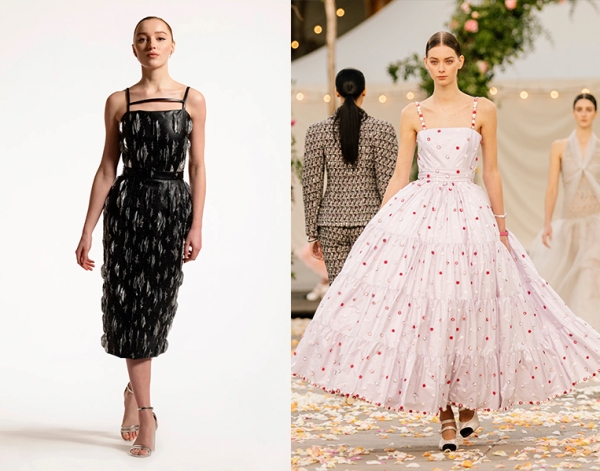 Phoebe Dynevor might have been the Diamond of Bridgerton and I tell you that had awards season happened like normal that she would have been the Diamond this season as well. She rocked an edgy glam Louis Vuitton cocktail dress from the Critics Choice Awards and for the SAG Awards where she is nominated with her cast for Outstanding Performance by an Ensemble in a Drama Series I would have love to see her bring something feminine and romantic to the red carpet. I have been thinking about Phoebe wearing this blush pink Chanel Spring 2021 Couture a-line tea length gown which features thin straps, defined waist, tiered skirt, and red and white dot embroidery all over. It is gorgeous and I know that Phoebe would bring the statuesque elegance to the red carpet. I would style it with a sleek updo, soft dewy makeup with light pink lips, red leather Christian Louboutin ‘Loubi Queen 100’ ankle strap sandals, and a selection of David Webb jewels including a pair of white diamond and ruby feather drop earrings and a matching ruby and white diamond cocktail ring to really make it scream glamour.

The 2021 SAG Awards special will broadcast on Sunday April 4, 2021. You can see all my wishes for this years show here.