A lot of people say fashion isn’t and shouldn’t be political. I say they are dead wrong. I’ve honestly missed writing about fashion as it relates to American politics. I’ve had a blackout on the Trump administration because I fervently disagree with the administrations policies. So now that we are into campaign season I am getting excited. From Michelle Obama launching careers of young designers to Barack Obama’s biggest scandal being the tan suit the Obama white house was full of fashion moments. I don’t expect that if Joe Biden and Kamala Harris win the 2020 Presidential Election that they would come close to rivaling the Obama’s, but I definitely think that I will be watching. The 2020 Democratic National Convention, the official kickoff of the final stretch to election day starts tonight and over the next several nights we will see the biggest names in Democratic politics gather around the country virtually to rally their support behind former Vice President Joe Biden and his running mate Senator Kamala Harris. So let’s talk about some of the looks I would like to see worn for some of the speeches that will be given.

Starting the list is Senator Kamala Harris, the nominee for Vice President of the United States. She will deliver the Keynote speech on Wednesday to officially accept the nomination for Vice President. I’ve followed Kamala for a while now, but not because of her fashion. So when the announcement came down I did a bit of a dive into what she’s worn for events and as a senator in the Capital to shape what I would love to see her wear. She loves a pantsuit so of course for the speech to accept the nomination I found an amazing pantsuit for Kamala. I love the cut of this grey Altuzarra Fall 2020 RTW melange wool blend suit which feature a wide lapel double breasted blazer and a pair of wide leg pants. It is an interesting take on the classic pantsuit and I feel like it is easily something Kamala would wear. For the speech I would style the look with her signature soft curls, defined eyes, antique rose pink lips, a teal blue peony watercolor floral print Altuzarra silk button down shirt, a pair of black suede Jimmy Choo ‘Love 100’ pointed toe pumps, and her signature pearl earrings. Now typically on the final night of the convention after the presidential nominee gives their acceptance speech the VP nominee and the families come out and greet the crowd to a balloon drop and explosion of confetti. Due to COVID-19 we know that there will be no crowd. We don’t know what the speeches will look like yet, but I am really interested to see if Kamala will come out and join Joe Biden at the end of the convention. If she does I would like to see her step onto the stage wearing this royal blue Carolina Herrera Resort 2021 long sleeve crepe midi dress which features a draped skirt and a crew neckline. It isn’t often we see Kamala wearing a dress, but I feel like this one is perfect for her. Her signature curls, defined eyes, dark red glossy lips, those signature pearls, and black Christian Louboutin ‘Brandina’ croc stamped calfskin leather asymmetrical sling back pointed toe pumps would put the perfect finishing touches on this look for Kamala. It would make sure the official kick off is done in style.

Fashion isn’t what I associate with Dr. Jill Biden. She isn’t a high fashion political spouse, but she always gives us very chic and elegant looks for both more casual and more formal events. I would love to see Dr. Biden wearing two super chic looks for the 2020 Democratic National Convention. For her speech tomorrow night as the potential next First Lady I knew immediately who I would love to see dress Dr. Biden. I feel like she is perfectly slated for Oscar de la Renta and when I saw this azure blue Oscar de la Renta sleeveless midi dress which features an overlay neckline and a flared hem I knew I had found the perfect look for Dr. Biden’s speech. It is a chic off the rack moment and fitting for a future First Lady. Her signature waves, defined eyes, soft pink lips, and a pair of ballet pink suede and patent leather Jimmy Choo ‘Ray’ mid heel slingback pointed toe pumps would add the perfect finishing touches to this look. Now for the final night to join Joe on the stage after his speech (hopefully to a hail of balloons and confetti) I went with another off the rack look. I imagine Joe will wear a blue suit that I would love to see styled with a red tie, so to compliment the blue Carolina Herrera dress I picked for Kamala and that suit for Joe I would love to see Dr. Biden wear this white Lauren Ralph Lauren faux-wrap knee length dress which features a v-neck and a barely cap sleeves. It would make a perfect trio of looks especially if styled with her signature waves, defined eyes, nude pink lips, and a pair of white lace Gianvito Rossi ‘Liliane’ pointed toe pumps.

Representative Alexandria Ocasio-Cortez is going to be speaking tomorrow night as well. She has become a huge star since upsetting her district’s long held congressman. She gives major style moments. What I love about her is that she does stay accessible with her fashion. “Get used to me slaying lewks because I am an excellent thrift shopper” AOC has said. When I was looking for the perfect look for her to wear on the stage, wherever it may be, to deliver her DNC speech I knew it had to be accessible. So I went shopping on the virtual racks of Macys.com. Specifically the sale racks. I fell in love with the idea of seeing AOC wearing this black DKNY sleeveless a-line knee length dress which features an electric blue asymmetrical pleated panel immediately. Then I saw the $45.13 price tag and I knew it was perfect. She does live her life to what she talks and  appreciate that. Now I have seen her rock a really good shoe, so I went a little higher end with the shoes picking a pair of electric blue Alexander Wang ‘Rie’ silver studded pointed toe pumps. They are on the pricey side at $360 even at 40% off, but shoes are gold. To finish this look I would love to see her style the look with a sleek bun updo, defined eyes, red lips, and stud earrings.

Former First Lady Michelle Obama will take the virtual stage for the DNC tonight. I always love seeing Michelle because she LOVES to play with fashion. I would love to see her give us a bold fashion moment tonight so I picked this marigold yellow Christopher John Rogers Fall 2020 RTW draped dress which features batteau neckline, long bell sleeves, gathered detail on the waist, and a side split. It is a bit of a political statement not because of color, but because it is a black designer and a rising star. I would love to see Michelle really go for it with this look styling it with a chic wavy bob, defined eyes, dark red glossy lips, a pair of metallic yellow gold Schutz ‘Sol’ ribbed detail slingback pointed toe pumps, and Mateo NY 14k gold set baroque pearl drop earrings. It would make for a statement fashion moment for Michelle. 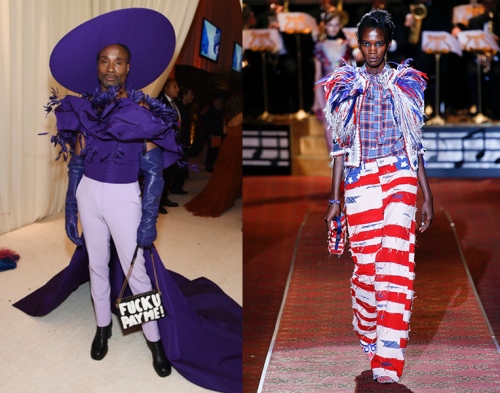 In addition to all of the political leaders speaking at the convention the DNC will also have a line up of musical acts that rivals what the VMA’s have already announced. Queer icon and Broadway star Billy Porter is among those who have been announced to perform at this years Democratic Convention. I always love seeing Billy as he serves a look no matter if hes walking a red carpet or joining an interview via Zoom. While I went pretty conservative with the looks I picked for the speakers I’ve picked some real FASHION moments for the performers starting with this major yee-haw meets glam grunge red, white, and blue Marc Jacobs Spring 2016 RTW ensemble for Billy Porter. Billy recently covered Buffalo Springfield’s 1967 protest anthem “For What It’s Worth.” I’m betting that he will be joining Stephen Stills who originally wrote and sang that protest anthem. It would be a great moment. I feel like this now archive fashion moment I would love to see Billy pull it out of the archive and bring it to life. 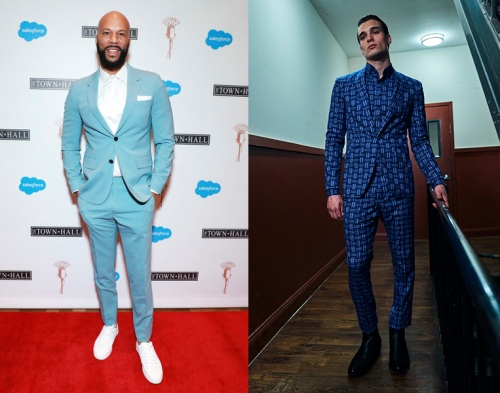 Common & John Legend are also going to be performing at the 202 DNC. Now it isn’t confirmed that they are going to perform together, but I would imagine that they will be performing their Oscar and Grammy Award winning song “Glory” from Selma. I decided not to include John this time because of sheer time cuts (I also wasn’t able to include Billie Eilish, Prince Royce, The Chicks, and more it really will be a star studded event) but I wanted to include Common. I’ve always loved seeing she sharp dressed rapper on the red carpet. I love that he isn’t afraid of color or pattern. I gave him that for my wish thanks to this Dzojchen blue and white basket weave single breasted suit with matching shirt. It is a statement suit for sure and I definitely can picture it being something Common would be drawn to. Style it with a pair of black calfskin leather Christian Louboutin ‘Dr Jack’ side laced oxfords to make the look perfect. 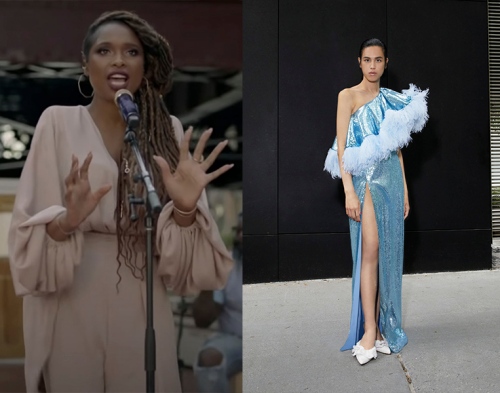 Vocal powerhouse Jennifer Hudson will also will be performing and I honestly wish I could pick one song to zero in on. She could give us Aretha Franklin performing some of the Queen of Soul’s protest anthems like “Respect,” “A Change Is Gonna Come,” or “People Get Ready” or she could perform her Oscar nominated song “I’ll Fight” from the documentary “RBG.” I’m leaning towards her performing Aretha since she does have the movie where she stars as the late Soul icon. I picked my look for her with Aretha in mind. I LOVE this ice blue sequin Prabal Gurung Resort 2020 one shoulder ruffle gown which features ostrich feather trim and a hip high split. I can imagine Jennifer giving us full 60’s inspired glam wearing this gown with an avant garde twist updo, thick winged eyes, deep red glossy lips, a pair of silver Giuseppe Zanotti ‘Sophie’ metallic leather slingback sandals, and dazzling Hueb ‘Botanica’ white diamond and aquamarine cluster earrings. It would be a major fashion moment for sure.

I can say I’m not exactly sure what Maggie Rogers will be performing at the 2020 Democratic Convention. She is one of the few who I’ve actually seen on the official schedule. She will perform tonight before speeches by Senator Bernie Sanders and former First Lady Michelle Obama. With her voice she could perform patriotic standards like “This Land Is Your Land” or “America The Beautiful.” While I don’t know what she will be performing I know I would love to see her rock her performance wearing this Carolina Herrera Fall 2020 RTW ensemble which features a rounded sleeve with ribbon tied cuffs electric blue tunic with a black rose pattern embroidered it paired with periwinkle blue straight leg pants. It is a meshing of oversized, femininity, and tailoring and I feel that is something that Maggie is drawn to in her looks. Styling it with a loose updo, barely there makeup, and white black Roger Vivier ‘Texan Sabot’ crystal buckle detailed cowboy boot inspired mules would definitely make this a super cool look for Maggie.