Today we continue with my 50 of the Most ICONIC Red Carpet Looks EVER list. I did my research. The looks in this list are all based on looks that stars wore on red carpets all over the world. Now while some might think of Audrey Hepburn, Marilyn Monroe, Grace Kelly, Katherine Hepburn, Rita Hayworth, and Twiggy when they think of iconic fashion moments. That is true, but you won’t find any of them on these lists. If you’re ready to ask me why I have an answer. Mostly their iconic fashion moments all were created for them by the costume designers contracted by the studios they worked for. I wanted to include only the looks that weren’t planned in conjunction with the studio for their impact. They might have been pulled together by high paid stylist, but not in a way that a studio would craft a look for their star based on the image they wanted them to have. Now this look is only ranked from the oldest to the newest and not based on how iconic I think that the look is. So let’s get into it. 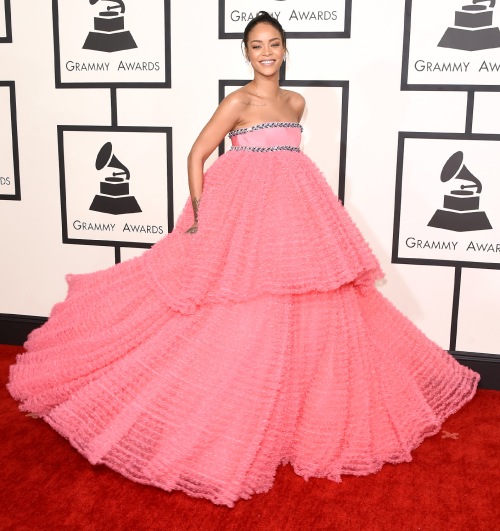 36) Rihanna in Giambattista Valli Couture at the 2015 Grammy Awards: Yesterday I talked about one of Rihanna’s most iconic looks. Had this been a list of just Rihanna looks it would have started way before 2014, but as she has grown as an artist her fashion looks have just gotten more and more iconic. That being said 2015 really was the year of Rihanna on the red carpet starting with the pink ‘Cupcake’ Giambattista Valli Couture gown which she wore to twirl her way into the Grammy Awards. I NEVER would have picked this gown for Rihanna. I honestly our have picked this gown for someone like Ariana Grande, but Rihanna showed that couture can be effortless wearing this gown with barely there glam and still created a look that I will never forget. 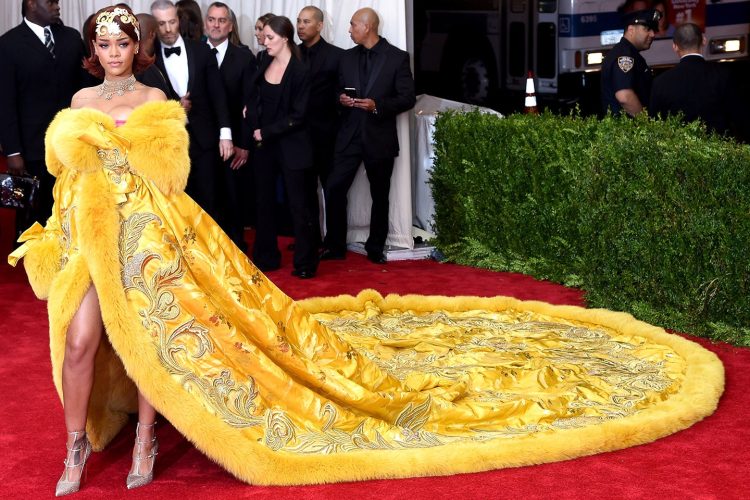 37) Rihanna in Guo Pei Couture at the 2015 Met Gala: Several months later she did it again showing up as the last guest to arrive at the 2015 Met Gala wearing this iconic Guo Pei Couture cape. It was the look that sparked a million memes. Most likened this look to a comforter, eggs, and a pizza. What I loved about this look is that Rihanna paid homage to an actual Chinese designer for the Chinese themed gala, and did so in a MAJOR way. She had several attendants to help carry her train up the red carpet and make sure it was placed perfectly. While everyone was calling Beyonce the Queen of the Met Gala Rihanna showed that she is not one to underestimate. As Andre Leon Tally said when he saw it “It’s the black Frozen. It’s the look of the night.” It was one of the biggest looks of the year and of the decade for sure. I feel like people will still talk about this look in the next century. That’s iconic.

38) Lady Gaga in Brandon Maxwell at the 2016 Academy Awards: Lady Gaga’s second appearance in my 50 of the Most ICONIC Red Carpet Looks EVER list is significantly more glamorous than her first appearance. In 2016 we were on the road to Joanne and solidly in Lady Gaga’s romance with her stylist turn designer’s creations on the red carpet. It was also where she earned her first Oscar nomination. In this time I was really loving red carpet lady pants and this custom Brandon Maxwell ensemble gave them to us in a super glamorous way. While Gaga might have been robbed of the Oscar this time, she owned best dressed lists. 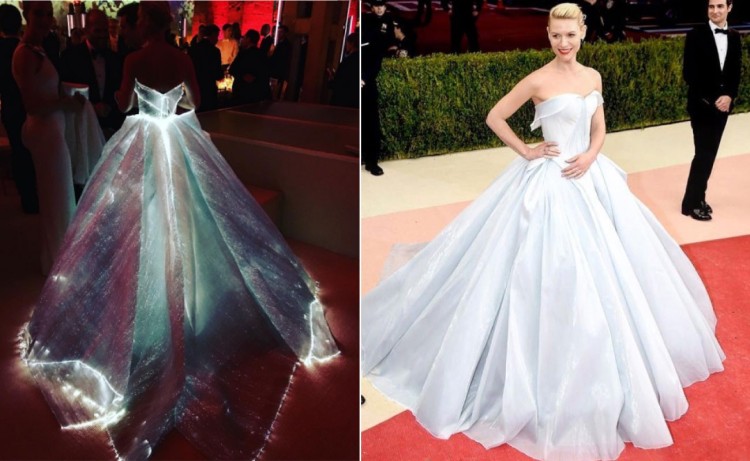 39) Claire Danes in Zac Posen at the 2016 Met Gala: Claire Danes took the 2015 Met Gala theme of Fashion and Technology very seriously. While most of the guests went to futuristic and robotic inspired designs Claire called on master creator Zac Posen. Zac made s custom strapless silver blue ballgown that on the bright lit red carpet was a glamorous Cinderella glamour with perfect construction, but what made this look ICONIC is when she walked inside the museum where it was dark and you saw that Zac had woven fiber optics into the gown and it literally lit up the night.

40) Celine Dion in Ralph & Russo Couture Out in Paris in 2016 Prior to 2016 Celine Dion was always one who delivered very glamorous couture moments on the red carpet, but then she started working with Law Roach at the time and started having a lot of FUN with fashion. Over the summer of 2016 she had a series of concerts in France and on her way to the venues each day she gave us a fashion show wearing some major fashion moments to leave her hotel (and often times turned the whole moment into a full on event.) There were so many major looks, but when she walked out the doors of the hotel dressed in head to toe white with a Ralph & Russo cape that trailed behind her with the big wide brimmed hat and those sunglasses I was left in awe. This look had just recently walked the runway and Celine, through Law, was able to snatch this cape for a super quick street style moment. It was a risk for the brand for sure, but it lasted making it that quick street style moment instantly iconic.