Today we continue with my 50 of the Most ICONIC Red Carpet Looks EVER list. I did my research. The looks in this list are all based on looks that stars wore on red carpets all over the world. Now while some might think of Audrey Hepburn, Marilyn Monroe, Grace Kelly, Katherine Hepburn, Rita Hayworth, and Twiggy when they think of iconic fashion moments. That is true, but you won’t find any of them on these lists. If you’re ready to ask me why I have an answer. Mostly their iconic fashion moments all were created for them by the costume designers contracted by the studios they worked for. I wanted to include only the looks that weren’t planned in conjunction with the studio for their impact. They might have been pulled together by high paid stylist, but not in a way that a studio would craft a look for their star based on the image they wanted them to have. Now this look is only ranked from the oldest to the newest and not based on how iconic I think that the look is. So let’s get into it.

26) Angelina Jolie in Atelier Versace at the 2012 Academy Awards: I’ve included two looks from Angelina Jolie in this list. The first was all about oozing sophisticated glamour. This one is all about showing off how fierce she is. On paper I would have never included this black velvet Atelier Versace origami fold draped gown. It is elegant for sure, but isn’t even close to being a statement making look. Instead it was all about the fact that Angie rocked the slit of this gown. All night long Angie made sure her sky high thigh was on display. She walked odd, but it was all worth the images that have ensured. The look screams sex appeal, but in a dark, glamorous manner.

27) Gwyneth Paltrow in Tom Ford at the 2012 Academy Awards: Making her final appearance in my 50 Most ICONIC Red Carpet Looks Ever list is Gwyneth Paltrow wearing that major white Tom Ford cape gown at the 2012 Oscars. This look screams glamour and was really the first major caped gown on the red carpet. Since then we have seen caped gowns show up on the red carpet. This look was glamour defined and Gwyneth definitely gave Tom Ford the best red carpet to this point under his own womenswear label, which had launched about a year before. It is still the first look I think of when I think of Tom Ford and the most major moment he has delivered on the red carpet. Sleek timeless glamour. Perfection.

28) Nieves Alvarez in Stephane Rolland Couture at the 2013 GOYA Awards: This look holds a special place in my heart. I think it signifies a change in my personal taste towards red carpet looks. Spanish supermodel Nieves Alvarez showed up on the red carpet at the Spanish equivalent of the Oscars, the GOYA Awards wearing this intricately crafted black, red and cream Stephane Rolland Couture gown and commanded attention. It was such a statement making gown. It made me take notice of Nieves. Since this look she went on to top my 2012 Best Dressed of the Year list (in this gown) and on to still be one of my favorite models to see on the red carpet. This look was drama defined from head to toe done.

29) Jennifer Lawrence in Christian Dior Couture at the 2013 Academy Awards: To take home her Academy Award for Silver Linings Playbook Jennifer Lawrence of course turned to Dior. This was her first awards season as a spokesmodel for the label. It is probably her best. To this point I feel like many of Jennifer’s red carpet looks had skewed her style very sporty and athletic. This was the first really successful princess moment. I honestly had no idea what to expect from her this year. In my wishes I picked a similar, yet sleeker, gown from the same collection I still wanted to see customized. When she stepped onto the red carpet wearing this gown I knew that Rachel Zoe, who stopped styling soon after this season, had done her well. The beautiful barely pink mermaid gown worn the simple earrings and the backwards worn necklace was exactly what I needed to really fall in love with Jennifer’s sense of style. 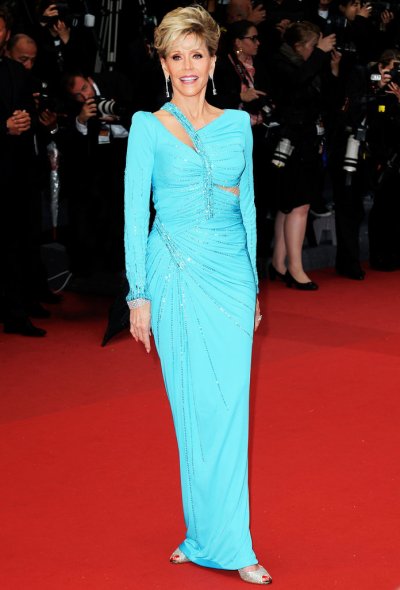 30) Jane Fonda in Atelier Versace at the 2013 Cannes Film Festival: Finishing out today is a majorly sexy moment that changed how we defined “dressing for your age.” Jane Fonda has always been one to give us sex appeal and glamour on the red carpet, but she did much more than that when she stepped on to the red carpet at the 2013 Cannes Film Festival as the guest of L’Oreal Paris wearing this aqua blue long sleeve draped column gown which features sexy cutout’s on the neckline and the hip. It was such an unexpected moment. I remember seeing it for the first time and thinking WOW YOU GO GIRL. It wasn’t what Jane had trained us to expect from her. This is where I feel she started taking back her style and giving moments that she really LOVED instead of giving glamorous moment that she was expected to wear on the red carpet at the age of 76 at the time. She hasn’t slowed down the sexy since & I don’t expect her to stop any time soon.