The Chanel Cruise 2021 presentation was cancelled due to COVID-19. The French luxury label was going to bring guests from all over the world to Capri, Italy for the event. If I was one of the guests who were supposed to be attending this show I would be really glad that it was cancelled. I saw the lookbook, shot on sets created to evoke the Mediterranean in the Chanel offices in Paris, and I was flabbergasted. It was pretty much utter trash. I’ve given Virginie Viard the benefit of the doubt for a year now. I had hoped that she would usher in a new vision for Chanel, but the collections have been dull and boring since the death of Karl Lagerfeld last year.

As I was looking at this collection I couldn’t help but think how banal it all was. Where is the design? Where is the creative? I feel like we have seen all of the 51 looks that Virginie Viard presented before. Many times and from many different labels all the way down to your local Target store. In a moment where excess is being targeted and conversations about waste in the fashion community are being had I found myself continuing to ask myself: “Why is was this collection necessary?” I as much as anyone loved Karl Lagerfeld. He was a creative genius. One that was propped up by a team of artisans, but someone with a creative mind that never stopped working. Season after season since Virginie has taken a decline in creativity. I don’t think she is capable of continuing to show six collections, two pre-collections, two ready-to-wear collections, and two couture collections. Some people aren’t.

Now with that trash talk being said there are still a couple of looks I think could be very chic looks for the red carpet starting with this black and silver abstract stripe print metallic lurex midi dress. This dress is definitely one of the best looks from this collection. It is easy, elegant, and glamorous. In terms of design it isn’t anything major, but with the right styling on the red person it would be super chic. I saw this dress and immediately thought of Cate Blanchett wearing it on a boat in Venice in between events during the Venice Film Festival later this year. It would definitely be that perfect balance of effortlessness and glamour, especially if Cate styled it with an ombre metallic grey Jimmy Choo ‘Madeline’ python leather crystal buckle top handle bag, a pair of black Malone Souliers ‘Brook’ mid heel pointed toe nappa leather and mesh pumps, and a pair of black Chanel oval sunglasses with a pearl detail.

Along with each of the seasons I have said “if I were under contract as a Chanel ambassador I would be looking for every loophole to get myself out of it.” Honestly if I were Margot Robbie, Keira Knightley, or Penelope Cruz I would be running for the hills. Now that being said as I was looking at this collection there were several looks that screamed Kristen Stewart to me. A series of all black looks I think would speak to Kristen’s meshing of edge and glamour. These looks all speak to Kristen’s style and I do think that for different occasions with the right styling I could see her rocking this looks to perfection. 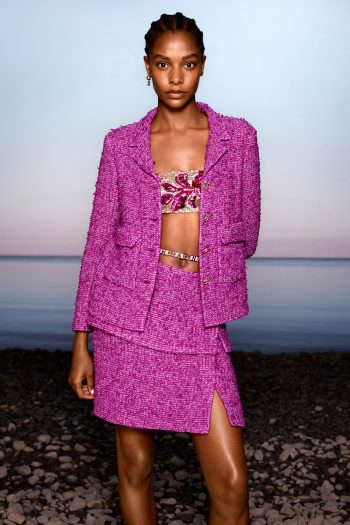 This magenta pink tweed skirt suit with a sequined floral bandeau was easily the best look in the collection. This is what we want Chanel to be. This look was bold statement making unapologetic glamour. Tweed suits always tend to read heavy into the ladies who luncheon and royal set. The jacket and skirt itself would have been a beautiful look for Meghan Markle to wear for a royal occasion, but not necessary anymore.  As it was presented in the lookbook I would LOVE to see Sophie Turner bring it to life. She has the balance of edge, sex appeal, and elegance to really make a look like this come to life. Styled with a sleek high ponytail and light gold Casadei ‘Blade Webster’ pointed toe two strap mesh pumps I know it would be a major fashion moment for the former Game of Thrones starlet. 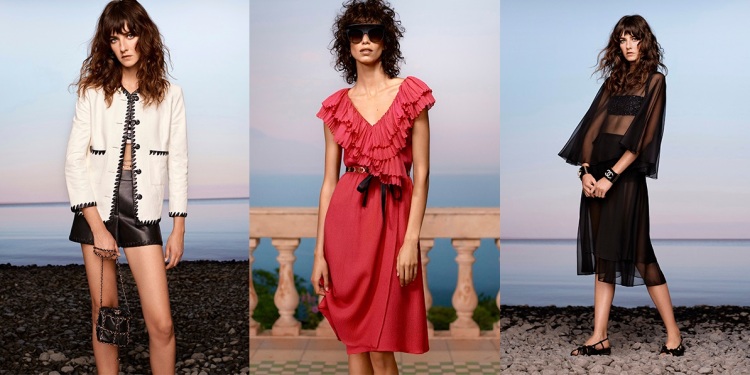 Aside from the one’s I’ve already mentioned there weren’t really any other looks that spoke to me for someone specifically. The looks are are just too bland. They didn’t elicit anything in my spirit. There were some chic classics, but they just don’t make me get excited about seeing them on the red carpet. Fashion should evoke a feeling and this collection didn’t do that for me. It just showed me boring fashion. I am hoping that Virginie’s tenure as the Chanel creative director is coming to an end.