In an effort to combat the COVID-19 crisis Disney has decided to release Artemis Fowl on Disney + next Friday, June 21. As we all continue to social distance and places like movie theaters remain closed Disney has pushed the released of basically all of their movies. Artemis Fowl was originally slated for an August 9, 2020 theatrical release so this marks not only the first film from Disney to go from theatrical to streaming, but also the first to have it’s release pushed up. They decided to do this in hopes that as theaters, theme parks, and stores are all closed right now that the new film will help boost Disney + subscriptions. In terms of a missed red carpet I don’t know if Artemis Fowl would have brought us anything too major as the cast isn’t stacked with stars who love a big moment, but it would have been interesting at least to see what Hong Chau and Judi Dench would have brought to life for the premiere. 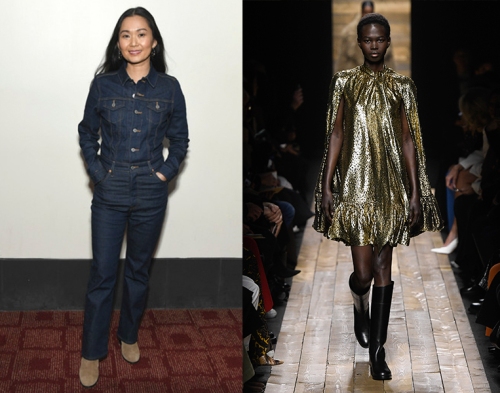 Hong Chau became a bit of a fashionista a couple of years ago when she took to the red carpets, and ultimately earned a few nominations, with the promo tour for Downsizing. Over the course of that tour and beyond have seen brands like Rodarte, Versace, ADEAM, Dior, Stella McCartney, Valentino, Salvatore Ferragamo, and Elie Saab embrace her. So I feel like she could definitely have had a chic fashion moment up her sleeves for the premiere of Artemis Fowl. So I went on the hunt for something super elegant and chic ultimately deciding on this gold lamé Michael Kors Fall 2020 RTW caped mini dress which features a knotted neckline and ruched hem. Had this film actually had a theatrical release I probably would have picked a gown for Hong, but this look would have worked perfectly for the straight to stream premiere. I feel like the look is a fun and flirty moment and that is exactly what I think that Hong would have rocked it with effortlessly easy. A sleek center parted hairstyle ticked behind the ears, defined eyes, deep red lips, a gold Alexander McQueen crystal clasp metal box clutch, a pair of gold metallic leather Gianvito Rossi ‘Kimberley’ platform chunky heel strappy sandals, and Marco Bicego ‘Africa Collection’ 18k yellow gold and black diamond two strand tassel earrings would definitely have made this a dazzling moment for Hong.

Judi Dench hasn’t been a style star, but at 85 the Dame earned her first British Vogue cover story. Inside that story we saw Judi pose in front of the lens wearing Dolce & Gabbana, Valentino, Dior Couture, and Armani Prive. It made me want to see Judi deliver a real fashion moment on the red carpet at the Artemis Fowl premiere. So I went to those same runways to find the perfect look and I was dazzled by the idea of Judi wearing this electric blue and emerald green ensemble from the Armani Prive Spring 2020 Couture which features a patterned coat covered in fringe and electric blue straight leg pants. This look would definitely have been the most fun that Judi has ever had on a red carpet and I really do believe she would have brought it to life especially styled with a made to match electric blue shell top under the coat, her signature platinum grey pixie, defined eyes, pink lips, an electric blue metallic python leather Tyler Ellis ‘Aimee’ clutch, a pair of electric blue satin Roger Vivier ‘Belle de Nuit’ crystal buckle detailed d’orsay flats, and simple yet dazzling sparkle via David Morris white diamond and emerald cut sapphire drop earrings.