Thai auteur Apichatpong Weerasethakul has been a Cannes regular ever since his film Uncle Boonmee Who Could Recall His Past Lives won the Palme d’Or in 2010, but his latest film Memoria marks the first time he’s worked outside his own country. That itself is an exciting shift, given that Weerasethakul has been the foremost cinematic chronicler of his country’s mythological and historical identity. This time with Memoria, he ventures to Colombia to explore the experiences of a nomadic woman suffering from exploding head syndrome, which causes her to hear loud noises that don’t exist. The filmmaker has described the movie as another dreamlike descent into a lyrical world just a few degrees removed from the real one, while still immersed in real places and people.

Tilda Swinton is a Cannes Film Festival regular and I am always ready for a Swinton sighting on the red carpet. Memoria is one of three films that Tilda had in the running to screen at this years Cannes Film Festival, and I was hoping to see multiple films from the actress in contention so she would bring several fashion moments to the red carpet at the festival. The first two looks I’ve picked for her are more on feminine side of avant garde thank we typically see from Tilda on the red carpet. For the Memoria photocall I would have loved to see Tilda snap up this periwinkle blue Maison Margiela Spring 2020 Couture dress which features a thin pussy bow neckline, intricate scrap details on the bodice into the skirt, long billowing sleeves, a pleated calf length skirt, and a PVC belted waist. The moment I saw this gown come down the runway back in January Tilda immediately popped into my mind. When she does take on femininity instead of her typically favored sleek tailoring I definitely get excited. I would finish this look with a sleek side parted hairstyle, defined eyes, soft pink lips, and a pair of periwinkle blue denim Aquazzura pointed toe mules with a crystal buckle strap to make this look head to toe perfection. For the premiere I was less sure about what I wanted to pick for Tilda, but as I started my search for the look I most wanted to see her bring to life in Cannes I fell in love with the idea of her wearing this pleated ruffled periwinkle blue, violet purple, and lemon yellow tye dye like Givenchy Spring 2020 Couture gown. It isn’t an obvious choice, but this is a look very few would be able to really sell to me and I believe that Tilda has that avant garde presence to be able to sell it to me. This would make for a major fashion moment for Tilda to bring to life in Cannes with a teased high coif, defined eyes, nude lips, bold yellow Aquazzura ‘Deneuve’ satin bow detail pointed toe pumps, and a bit of sparkle via Chopard Red Carpet Collection white and yellow diamond cluster teardrop pendant drop earrings. 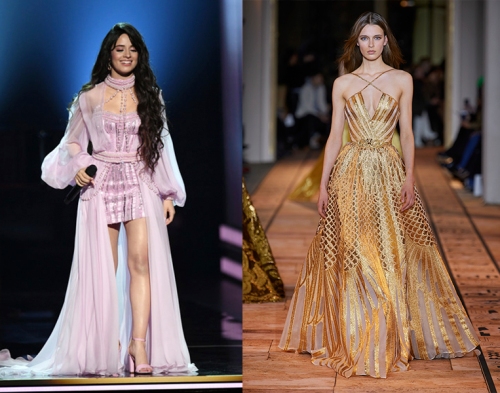 Had Camila Cabello finally made her Cannes Film Festival L’Orealista debut I want her to do so in high style. So in addition to the aqua mini skirt with a train from Elie Saab I wished for a couple of days ago. The second gown I’ve picked for Camila to wear in Cannes also comes from a Lebanese designer. This metallic gold Zuhair Murad Spring 2020 Couture Egyptian eagle wing embroidered a-line gown which features a think criss-cross strap halter neckline, a V-cut at the bust, and a defined waist is super cool and I do think it would play well on the Cannes Film Festival red carpet. I would imagine that many of the looks from this collection won’t be worn because they verge a little too much on the costume-y line, but this one doesn’t. I think this gown takes the inspiration and translates it into a modern glamour moment perfectly. Now I went round and round on how I would style this look for Camila while giving her a different beauty look. Ultimately decided that a half up/half down curly and braided evening style, defined light smokey winged eyes, lips done in L’Oreal Paris Color Riche “Matte-sterpiece” matte lipstick, metallic gold leather Christian Louboutin ‘Impera’ laser cut strappy pointed toe pumps, and a pair of dazzling white and yellow diamond Chopard Red Carpet Collection floral drop earrings would be the perfect finishing touches to this look. 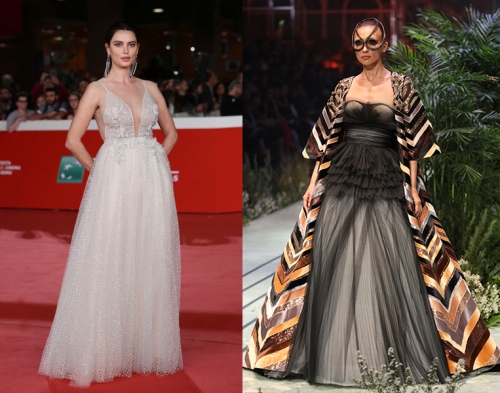 Catrinel Marlon has been on the Cannes Film Festival red carpet the last two years as a guest of Chopard. Given that she just recently shot another campaign for the luxury jewelry label I was sure we were going to see her again this year. The Romanian model is gorgeous and makes the festival rounds, but honestly I don’t get too excited about her looks. I don’t think she picks looks that flatter her. So I decided she needed some help so I decided to include her in these wishes. I am picking two looks for Catrinel from labels whom aren’t our red carpet regulars, as she doesn’t wear a whole lot from those big names anyway. The first label I wanted to include for Catrinel is this coffee and beige layered tulle Sebastian Gunawan Spring 2020 Couture strapless ballgown which features a sweetheart neckline, high cummerbund waist, and layered details above the hips. I would did the gorgeous sequined chevron opera coat the gown was paired with on the runway though. It just doesn’t hit right for Catrinel, but I would style this look with a sleek retro updo, smokey eyes, antique rose pink lips, a pair of black Jimmy Choo ‘Dochas’ crystal trimmed suede ankle strap sandals, and a statement white diamond Chopard Red Carpet Collection scalloped lace collar necklace with a large teardrop pendant. I believe that this would definitely be a major moment for Catrinel to bring to life.

In December 2018 articles dropped all over that Cheryl Cole had been dropped by L’Oreal Paris as a spokesmodel after working with the beauty brand for nine years. I was sad because in her tenure as a spokesmodel for the brand in Cannes she had delivered major moments. Now none of those moments had come in the last couple of years and were mostly at the beginning of her tenure with the brand. It was because of that news that I didn’t even wish to see Cheryl in Cannes last year, she didn’t show, but in September of last year I was shocked to see Cheryl walk the runway at the L’Oreal Paris fashion show during Paris Fashion Week. I’ve read that Cheryl is just a friend of the brand now, and I hope that means that in the future she will come back to Cannes and WOW again like she did in her early days at the festival. As I was looking for looks for Cheryl I saw this oxblood red Azzi & Osta Fall 2020 RTW column gown which features a ruffled asymmetrical one shoulder neckline, all-over sequin embroidery, and a thigh high split and fell in love with the idea of her wearing this gown in Cannes. It reminds me of the more sculptural and avant garde designs that Cheryl favored in her high time in Cannes and I thought it would make for a major moment for her festival return styled with a sleek side parted beehive updo, smokey eyes, L’Oreal Paris Color Riche creamy lips in ‘Raisin Rapture’, a pair of black Jimmy Choo ‘Thaia’ suede and crystal strappy sandals, and simple sparkle via a pair of white diamond and ruby de Grisogono pendant drop earrings.

Rounding out today is Zhang Ziyi who is also a global brand ambassador for Chopard. The Chinese actress is no stranger to Cannes and I would have loved to see her bringing the glamour to the festivals red carpets this year. Over the years in Cannes and otherwise Zhang has worn several Armani Prive gowns on the red carpet so when it came time to find the second gown I wanted to see Zhang wearing in Cannes it was an easy choice to pick this gold Armani Prive Fall 2018 Couture strapless ballgown. Now while picking the gown was an easy choice it was also easy to imagine this gown being modified removing the black velvet belt detail and the black tulle layer from the gown leaving just the golden bead embroidered bodice and the tiered gold tulle a-line skirt. While the black definitely adds contrast I think the more clean and classic elegance of the modified gown is much more in tune with Zhang’s sense of style. I would make this look scream glamour with a retro updo, defined eyes, red lips, a pair of black patent leather and gold metallic Gianvito Rossi strappy pointed toe d’Orsay pumps, and a selection of Chopard Red Carpet Collection 2020 jewels including a pair of statement “Ginkgo” drop earrings composed of pear-shaped emeralds, tsavorites and yellow sapphires in shades evoking the foliage along with a matching cocktail ring.

One thought on “2020 Cannes Film Festival What Could Have Been Wish List: “Memoria””