A number of upcoming UK features were believed to have set their sights on autumn festivals before the pandemic hit including Francis Lee’s romantic drama Ammonite, starring Kate Winslet as Victorian fossil hunter Mary Anning opposite Saoirse Ronan. It is Lee’s second feature after God’s Own Country, which premiered at the Sundance Film Festival. Now while it looked like it was set for a fall festival it also popped up in several Cannes Film Festival selection predictions. I think postponing the festival to the fall could see this film selected for the competition. So here we are with wishes to see it brought to the Cannes Film Festival red carpet, if selected when it is finally rescheduled.

Kate Winslet hasn’t been to the Cannes Film Festival since 1997. Since then she has won an Oscar and become a film legend. When it comes to fashion I don’t really get excited when I see Kate’s name pop up. She knows how to deliver glamour, but its usually very simple. You can see that reflected in the looks I’ve picked for her to wear while promoting Ammonite at the 2020 Cannes Film Festival. For the photocall I went elegant suiting for Kate with this red Michael Kors Fall 2020 RTW ensemble which consists of a wool-gabardine blazer with a chain detail and a matching silk georgette pleated shirt dress with a neck tie. It is a perfect balance of structure and flow and I think that would make for a super chic photocall moment for Kate especially if styled with elegant waves, defined eyes, nude lips, and a pair of gold snakeskin Aquazzura ‘Forever 120’ cutout pointed toe pumps. For the premiere I went with classic glamour for Kate opting to put her in this black tiered strapless ruffle silk chiffon mermaid gown from the Alberta Ferretti Fall 2020 RTW collection. It is definitely something I can easily see Kate wearing for just about any red carpet. A sleek retro inspired updo, smokey eyes, bold red lips, a pair of black Aquazzura ‘Garden 120’ platform ankle strap peep toe sandals, and a statement Bulgari ‘Cinemagia’ white diamond geometric collar necklace would all ensure that Kate delivers elegant glamour from head to toe on the red carpet.

Saoirse Ronan is one of the stars whose name I love seeing pop up for red carpets. She is always one who will take risks on the red carpet and I would have high expectations for Saoirse to bring to her Cannes Film Festival debut. She has been to the London Film Festival, Toronto Film Festival, and the Berlin Film Festival in the past, but no other festival compares to the glamour we see in Cannes. For the Ammonite photocall I went with a modern take of the safari suit with this olive green Galvan Pre-Fall 2020 suit which features a ring belted double breasted blazer and a pair of high waisted flared trousers. It would be a really chic moment for Saoirse to bring to the Cannes photocall balcony which overlooks the water of the French Rivera. This look would definitely be that super chic casual moment for Saoirse with a sleek center parted hairstyle tucked behind the ears, defined eyes, pink lips, a pair of nude, white, & gold Nicholas Kirkwood ‘Lexi’ criss-cross strap pointed toe pumps, and Mateo New York ‘Ring of Pearl’ hoop with diamond ear jackets. For the premiere I want to see Alessandro Michele customize a look from the Gucci Pre-Fall 2020 collection for Saoirse. I saw this emerald green and red mini dress which features intricate black beaded embroidery throughout and fell in love with it. I was obsessed with this dress as soon as I saw it and thought immediately of Saoirse wearing a gown of this look. Now to customize it I would customize this Edwardian inspired look first removing the pink taffeta that is under the fringe of the sleeves and creating a floor length tiered skirt alternating red and green panels. Red and green together has the potential to read very Christmas-y, but I think that this look would definitely make this a really cool moment for Saoirse to wear for her very first Cannes Film Festival red carpet. Style the look with a sleek center parted updo, smokey eyes, red lips, a pair of simple black suede Gucci strappy ankle strap sandals, and a pair of white diamond and emerald Chopard Red Carpet Collection teardrop pendant drop earrings and everything about this look would scream high glam. 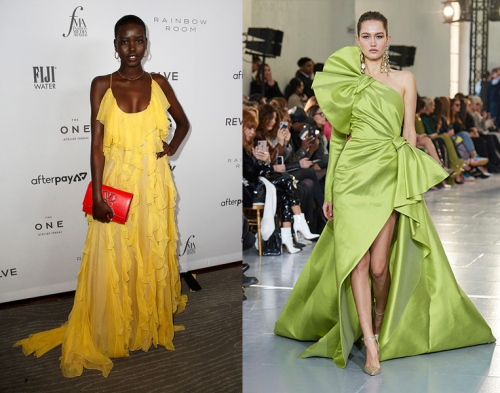 It was teased that Adut Akech was expected to attend the Cannes Film Festival for the first time this year. As she has become one of the top models in the world it doesn’t surprise me that she was able to snag some coveted premiere invitations. For her debut on the red carpet into the Palais de Festivals I would love to see Adut wearing this chartreuse green silk satin Elie Saab Spring 2020 Couture one sleeve ball gown which features asymmetrical fan details on the shoulder and hip as well as a daring thigh high asymmetrical hem and a dramatic train. I was originally going to honor her BFF status with Valentino creative director Pierpaolo Piccioli for her first Cannes Film Festival red carpet, but to be honest I feel like I am ready to see Adut branch out and become the red carpet icon like she has become a runway icon. So this statement look would definitely be a way for her to catch eyes. I think that Adut’s invites were going to come courtesy of festival sponsor Chopard, so I wanted to make sure that she had some major Chopard jewels were incorporated into the look. So a pair of major pink sapphire, tourmaline, peridot, amethyst, and sapphire paisley cluster earrings from the 2018 Chopard Red Carpet Collection would definitely add the perfect amount of sparkle to this look. To make sure this look is finished perfectly from head to toe I would style the gown with Adut’s signature buzzed hair, defined eyes, deep red glossy lips, and a pair of gold Christian Louboutin ‘Impera’ laser cut strappy pointed toe pumps. 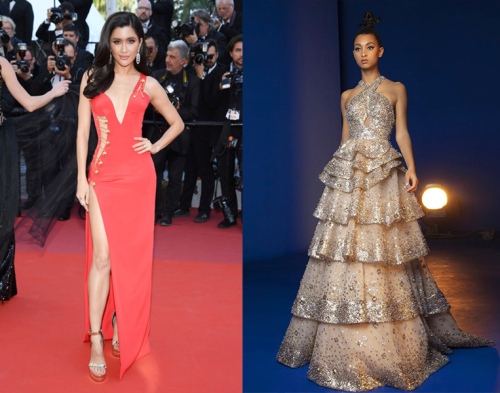 Praya Lundberg has been a L’Orealista, the fancy way of saying L’Oreal Paris spokesmodel, since 2015. Over the years in Cannes we have seen Praya go from super sexy in Versace to uber dramatic in Michael Cinco Couture. I want to see Praya deliver elegant glamour on this years red carpet wearing this champagne gold Rami Kadi Spring 2020 Couture crossover ball gown which features tiered ruffles embroidered with Swarovski and flower sequins, halter neckline, keyhole cutout, and a criss-cross open back. The look is super feminine glamour and I feel like it would make for a superb moment for Praya to deliver on the Cannes Film Festival red carpet as a L’Oreal ambassador. Styling the look with a sleek bun updo, defined eyes, rose pink lips, a pair of nude gold Jimmy Choo ‘Dochas 100’ ankle strap crystal embellished metallic leather sandals, and a pair of de Grisogono champagne diamond fan earrings set in rose gold would ensure that Praya once again delivers a chic moment on this red carpet.