Borrowing from philosopher Henri Bergson a concept called “la durée”, time that flows, accumulates, and is indivisible, The Metropolitan Museum of Art exhibit “About Time: Fashion and Duration” will explore the connection between fashion and time through the lens of the writings of the late Virginia Woolf, who will act as a “ghost narrator” of sorts. The concept of time, therefore, will inform the sartorial choices of the fashion world’s biggest night of the year, the annual invite-only gala fundraiser that is traditionally held before the exhibition opens. With a range of 150 years of fashion being covered in the exhibit the source material for inspiration will be plentiful. As I have said over and over again I do think that this red carpet is going to be filled with classic, timeless moments. But as always make it dramatic for the Met steps. 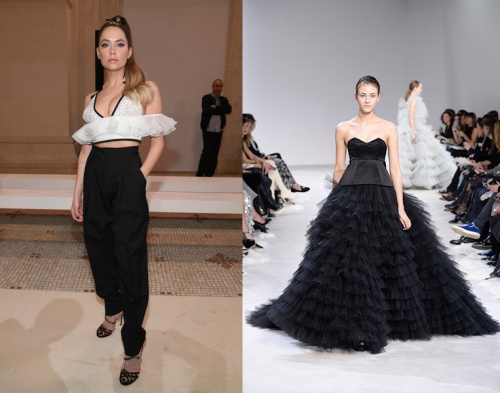 I don’t know why but when I was trying to come up with the perfect person to wear this absolutely glamorous black Giambattista Valli Spring 2016 Couture ballgown which features a peaked sweetheart neckline peplum bustier and a dramatic tiered tulle ball skirt with a long train Ashley Benson was the one who stuck in my head. Ashley was seated front row at the Giambattista Valli Fall 2020 RTW show during Paris Fashion Week just over a month ago (doesn’t that sound like a lifetime ago now), but she has never been to a Met Gala before. She was girlfriend Cara Delevingne’s date last year to the Gucci after party. Maybe this year will see Ashley get her first invitation to walk the famed steps of the Metropolitan Museum of Art. This black gown is definitely a glamorous moment and I think that Ashley would definitely bring it to life on the red carpet. A teased 50’s inspired updo, thick winged eyeliner, blush pink lips, a pair of sky high black Jimmy Choo ‘Max 150’ ankle strap peep toe platform sandals, and a selection of statement Lorraine Schwartz jewels including a chunky white diamond and Colombian emerald necklace and a bold emerald cut emerald cocktail ring would all make sure that Ashley’s Met Gala debut is nothing but glamour defined.

Eiza Gonzalez made her Met Gala debut giving us sexy priestess vibes wearing Prabal Gurung Atelier at the 2018 event. She skipped last year, but I would love to see the actress on this years red carpet. I am in love with the new direction Lanvin has taken under the leadership of Bruno Sialelli. The brands Fall 2020 RTW show definitely had me really excited for this years Met Gala. The collection seemed to span inspiration through several decades of fashion, but all strewn together by one common thread: glamour. I really want to see several of the looks from this collection brought to the Met Gala red carpet, in a modified version. This butter yellow skater dress which features a rounded neck, silver, black, and blush beaded straps, an a-line rounded pleat skirt is super cute and perfect for a Cannes Film Festival photocall or the MTV Movie Awards as it was presented. If I were Eiza’s stylist Elizabeth Saltzman ask Bruno to custom make this into a floor length a-line gown with a sweeping train. It would definitely give the modern 60’s vibe to the red carpet and I think Eiza could definitely make sure this is a beautiful and graceful glamour moment. Style it with a sleek twisted high bun updo, defined eyes, peach pink lips, a pair of nude and PVC Aquazzura ‘Temptation’ crystal embellished peep toe slingback sandals, and a selection of major Bulgari jewels including a pair of asymmetrical white diamond and pink sapphire teardrop earrings and a statement white diamond, pink sapphire, and emerald ‘Serpenti’ cuff bracelet to ensure that this look is glamour defined from head to toe.

Regular readers will know I do not typically feature Kim Kardashian & Kanye West, but the two are usually on the Met Gala red carpet. I go back and forth on if I will feature these two every year, but when I saw the look I picked for Kanye I knew he was the perfect person to wear it and that I couldn’t not feature the look so here we are. But before I get into the look for Kanye let’s start with Kim. Over the years Jim has worn everything from dramatic Roberto Cavalli to almost pedestrian Vivienne Westwood on the Met Gala red carpet in the past. Over the last year Kim has actually worn a lot of really beautiful vintage looks on the red carpet, but instead of going to one of her go to labels I decided that I really want to see Kim bring the big glamour to the Met Gala red carpet wearing this white strapless Stephane Rolland Spring 2020 Couture feather and bead embellished bustier bodice ball gown which features a sheer full ball skirt and a sweeping train. Stephane Rolland isn’t really a Met Gala label and it has been a while since Kim has worn one of the couturiers creations in a while, but this gown definitely is the epitome of modern timeless glamour and I think it fits the theme of this years Met Gala perfectly. Style it with old Hollywood waves, smokey eyes, red lips, a silver Christian Louboutin ‘Planetava’ pyramid stud embellished ankle strap metallic leather sandals, and a pair of glamorous sixty carat white diamond Lorraine Schwartz teardrop pendant earrings and it would be Kim’s best Met Gala moment ever. Now for Kanye I want to see him give a new take on menswear formal dressing wearing this black Wales Bonner Spring 2020 RTW ensemble which features a white ruffled tuxedo shirt, high waisted trousers, and a wide cummerbund waist. Wales Bonner has been championing a bit of gender-less style so while the look was modeled by a female in the lookbook I think it would be something right up Kanye’s ally, especially since Grace Wales Bonner is also an activist designer who addresses the intersectionality of fashion, identity, sexuality, and race. This look with the shirt worn slightly unbuttoned like it was presented in the lookbook with a pair of black Christian Louboutin ‘Champignac Flat’ metallic scalloped brocade and spike studded oxfords with thick soles would make sure that this look fits Kanye’s sense of style perfectly. Together this would definitely be a great couple moment on the Met Gala red carpet.

The addition of Katherine McPhee to this set of wishes was a last minute decision. I originally had Kim and Kayne as individual images, but decided to put them in the same one. So I wanted to keep 5 images in each post so I thought it was a great idea to add a look that was time inspired. I read something where the question was asked “will everyone come dressed as clocks?” I do not want to see that, but I could see it being done well by one or two labels. I Googled clock gowns and this silver Paolo Sebastian Spring 2018 Couture strapless ballgown really stood out to me. The collection was inspired by Disney princesses and this clock embellished gown was inspired by the clock striking midnight in Cinderella. Paolo Sebastian isn’t a Met Gala label either, but I was thinking of how it would be a great label to dress Katherine McPhee who usually attends with husband David Foster. Katherine would definitely make this almost kitschy moment super chic styled with a sleek updo, defined eyes, soft pink lips, a silver Judith Leiber Couture ‘Soho’ snakeskin crystal embellished clasp clutch, a pair of silver Le Silla ‘Divina’ crystal embellished PVC slingback sandals, and Atelier Swarovski ‘Mosaic’ lab created white diamond drop earrings.

Finishing out this list is one of my wishes for a major Rodarte moment on the Met Gala red carpet. Over the year years Rodarte has never dressed a woman of color for the Met and I am hoping that changes this year. The label has some major moments and it was all women of color who came to mind as I was picking out who should bring the looks to life on this red carpet. I want to see Rodarte modify this 40’s meets matador white ensemble which features a long sleeve fringe trimmed beaded crop top and a bead embellished midi skirt with a center split into a floor length gown. I don’t want to see it as a two piece look for Tracee Ellis Ross, whom I think is the perfect person to bring this look to life on the red carpet. She could definitely make sure that this look just oozes structured sophistication. This look would come together perfectly with a 40’s inspired updo, defined smokey eyes, bold red lips, a white velvet Tyler Ellis ‘Lily’ clutch, a pair of white and silver Nicholas Kirkwood ‘S’ pointed toe ankle strap d’Orsay pumps, a pair of Nikos Koulis ‘Universe Line’ white gold earrings with white diamonds and emeralds in translucent enamel, and a Nikos Koulis white gold ring with white diamonds and emerald in translucent enamel worn on her pointer finger.