I am really hoping that the drought of glamour that has been happening on the red carpets lately will end in time for the 2019 Emmy Awards red carpet. I need drama. I need glamour. I need fashON. I feel like the mix of big names who are finishing their run on the Emmy Awards red carpet and the newbies who have me really excited to see what the future has in store is going to make this a major red carpet.

Emilia Clarke will walk the Emmy Awards red carpet as an Emmy nominee for her performance in the final season of Game of Thrones. There was major push back against the final season of this series and a lot of that centered around Emilia’s character’s story line. She is nominated for Outstanding Lead Actress in a Drama Series. This is a hard packed category. The nomination process resulted in it being the only category with seven nominees instead of the usual six. With this being such a tough category I am wondering if Emilia will finally pull off a win for her role in Game of Thrones or not. I would love it if that happened, but I’m unsure of the likelihood of it happening right now. I definitely want to see Emilia win the red carpet. For the look I’ve picked for her to wear for this years Emmy’s I put in a great deal of thought. It was on the Emmy Awards red carpet back in 2012 that Emilia had her first major fashON moment wearing a Versailles inspired Chanel tea length gown. It was really the first major look from Emilia and it sparked her partnership with a plethora of other luxury labels. Now it has been a real hot minute since Emilia last wore a Chanel design on the red carpet, but I would love to see her back in the label for her last Emmy’s with Game of Thrones. So to the latest couture collection I went. I don’t particularly find Virginie Viard’s creative direction for Chanel to be very inspiring, but this bordeaux Chanel Fall 2019 Couture strapless column gown which features a twist draped bodice with a sweetheart neckline is a gorgeous gown. Is it anything boundary pushing or unexpected like the Chanel gown that Emilia wore back in 2012? No, but it could be a really chic effortless glam moment for Emilia to bring to life on this red carpet. It is a classic gown that if she wins will hold its timelessness. I would finish this look with a sleek updo, defined eyes, antique rose pink lips, a pair of black Tabitha Simmons ‘Iceley’ gold bead and crystal embellished strappy sandals, and a beautiful antique 19th century emerald drop and diamond collar necklace from Fred Leighton to just ensure that Emilia walks this red carpet with her most glamorous foot forward.

Jodie Comer is also nominated in the Outstanding Lead Actress in a Drama Series category at this years Emmy Awards. I think that between Emilia, her Killing Eve co-star Sandra Oh, This Is Us star Mandy Moore, and House of Cards star Robin Wright that Jodie is a dark horse to take home this Emmy. That doesn’t mean I don’t want to see her put a very glamorous foot forward on this red carpet though. I want to see Jodie deliver chic, sleek, and sophisticated elegance on the Emmy Awards red carpet wearing this bold red Stella McCartney column gown which features cap-sleeves and a sweetheart neckline. I have a feeling that after a short break from the red carpet that now that LVMH has a stake in Stella McCartney that we will once again be seeing the brand pretty regularly on the red carpet. I feel like Jodie would wear this gown with a sort of effortless ease. Finish it with old Hollywood waves worn over one shoulder, defined eyes, soft pink lips, a pair of nude Stuart Weitzman ‘Nudist’ sandals, and a bit of sparkle via Kwiat ‘Silhouette’ fancy shape and round brilliant diamond chandelier earrings and I know this look will land.

Michelle Williams will be making her first Emmy Awards red carpet return since her Dawson’s Creek days and I am praying to the overlords of fashion that she does so with a wow. She is nominated for Outstanding Lead Actress in a Limited Series or Movie thanks to her performance in Fosse/Verdon and as one of the major stars with access to a major fashion house I am just hoping that her stylist Kate Young is working on something fantastic! While I have a love/hate relationship with Michelle as a Louis Vuitton ambassador, as I do with most LV ambassadors because I have a love/hate relationship with LV itself, I am hopeful that Nicholas Ghesquiere will create something amazing for her to wear on this red carpet. I imagine it will be custom so I turned to Evita and all the custom looks she created for me from the Louis Vuitton Cruise 2020 collection. I remember her sending me this silver Chrysler Building inspired gown which features a halter neckline, intricate silver art deco inspired embroidery, and silver beaded panels down the side. I fell in love. It was instant, but then the thought of “is this too good for LV” came into my mind. My honest answer to that question is yes. I do think it is to chic and glamorous for Louis Vuitton and I am probably setting myself (and all of you) up for disappointment with this wish, but it is just too good. I think it is a good thing Michelle isn’t really one for a lot of styling because this gown is such a dazzling show piece all on its own that I think that simplicity is the key in its styling. A sleek side parted pixie, defined eyes, bold red lips, a pair of silver Louis Vuitton ‘Silhouette’ metallic leather sandals, and simple vintage Cartier art deco white diamond drop earrings would perfectly compliment this gown making it one of the best red carpet moments that Michelle has had in a really long time.

Patricia Clarkson won both a Golden Globe Award and a Critics Choice Award for her performance in the HBO limited series Sharp Objects. At both award shows she wore gowns by designer Georges Chakra. When she stepped onto the red carpet at the SAG awards wearing a gown from Zuhair Murad Couture I wondered if her winning streak would be broken, and it was. So I have decided that Georges Chakra is Patty’s good luck charm and that she should wear one of his designs on the Emmys red carpet! I didn’t even need a second look at the collection to know which gown I wanted to see Patricia wear. I watched the Georges Chakra Fall 2019 Couture show on Instagram live back in July and when I saw this pearlescent grey to gold ombré gown which features a draped asymmetrical neckline, corseted waist, and a flowing skirt I knew immediately it would be a major moment for Patricia. So when her Emmy nomination was announced I knew it was a match made in heaven. Doesn’t this look like all it would need to complete a glamorous moment is an Emmy in her hands? Well maybe not just an Emmy. I would style this look with a chic vintage inspired updo, defined eyes, deep red lips, a pair of gold Stuart Weitzman ‘Paulette’ knotted metallic leather ankle strap sandals, and dazzling Amwaj ‘Fancy Intense’ yellow and white diamond drop earrings to make sure that Patricia is the epitome of glamour from head to toe. 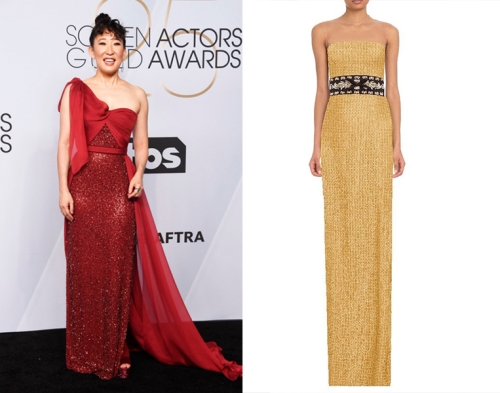 Rounding out today’s set of Emmy Wishes is Sandra Oh who I think is the frontrunner to take home the trophy for Outstanding Lead Actress in a Drama Series thanks to her performance in Killing Eve. That role has won her a Golden Globe, Critics Choice, and SAG Award. I think it could only be a previous winner whose series is over could knock the Emmy out of Sandra’s hand. Now I have a hard time picking looks for Sandra as her style is really all over the place. She knows how how to deliver major glamour, but she isn’t the most consistent. For this years Emmys I decided that simplicity is best so I had Evita whip up this custom gold beaded Prada gown with a statement crystal embellished cummerbund waist. Now a look like this has to be executed perfectly. The details in the construction of the dress must be meticulous or the look would flop. The styling also has to be on point which has been a point of contention for me when it comes to Sandra’s past red carpet looks. She loves a chunky platform shoe. Personally I hate that for a red carpet, but going with her style ques I decided to pair this gown with black satin Prada ‘Plateau’ sandals trimmed in metallic gold leather piping. Finishing the look with a sleek updo, defined eyes, burgundy lips, and a pair of insanely gorgeous Nak Armstrong one of a kind milky sapphire, labradorite, rainbow moonstone, and aquamarine drop earrings. I think that if done the way I envision I believe that this could be one of Sandra’s best red carpet looks ever.