The 2019 Emmy Awards are coming. They will go live from the Microsoft Theater in LA two weeks from yesterday! It is going to be a big night. We will be saying our final goodbyes to some shows and cast members who have been on this red carpet for years. I definitely want to see this years red carpet wow me. I have been in a drought of red carpet glamour lately. The fashion at the Venice and Toronto Film Festivals has done nothing for me. I’m craving a major Best Dressed of the Year worthy moment. It has been too long since the last look I would consider a contender. I want more major moments. There was a look from the Emmy Awards on my Best Dressed of the Year list every year from 2011 to 2015. I am hoping that the stars of television are cooking up major moments for the red carpet this year. 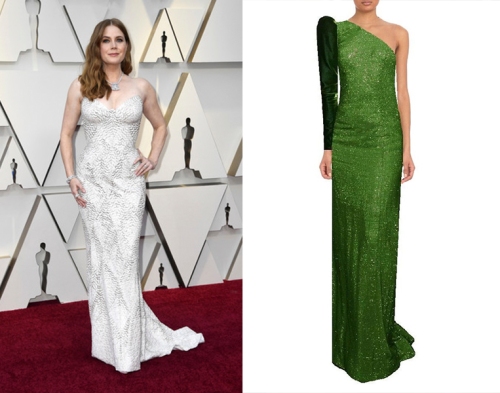 Amy Adams was seemingly robbed of both a Golden Globe Award and a Screen Actors Guild Award earlier this year for her role in the HBO limited series Sharp Objects. The show premiered over a year ago and I am wondering if Amy really has any steam left behind to to take home the Emmy for Outstanding Lead Actress in a Limited Series or Movie for her performance in the show. I want to see Amy deliver a major moment on this red carpet. Her looks during awards season were pretty, but not the outstanding moments I know and expect her to deliver on the red carpet. For this years Emmy Awards I decided to turn back to one of Amy’s dear friends, Tom Ford, for her red carpet look. Now the new CFDA president is showing his Spring 2020 RTW collection tonight at New York Fashion Week, but I would imagine that if he was dressing Amy for the Emmy’s that he would be creating something custom for her. Now regular readers will know that I love a red head in green so when I started thinking about a custom Tom Ford for Amy that was really my only requirement. I found a green Tom Ford dress online that had these amazing velvet slim leg-o-mutton sleeves on it. I did love the sleeves, but thought that it needed a bit of sparkle so when I sent the inspiration dress to Evita to work her magic I told her I wanted the gown to be fully beaded with a single velvet sleeve. She delivered this gorgeous column gown in exactly the manner I requested and it was everything I could have imagined. I do believe that this style on Amy with a sleek updo, smokey eyes, soft rose pink lips, a pair of gold Tom Ford knot-detail crystal embellished chain sandals, and vintage art deco Cartier diamond and emerald drop earrings would be a killer fashion moment on the Emmy Awards red carpet. 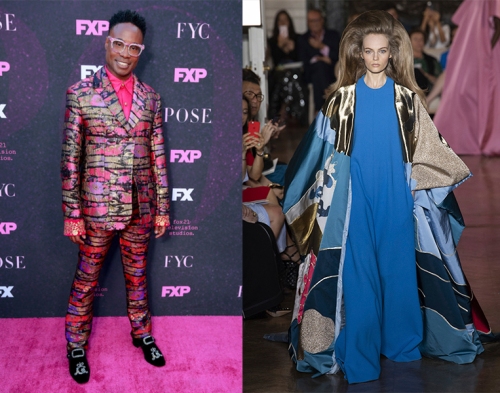 Billy Porter is definitely a contender to be the first man to take a place on my regular Best Dressed of the Year list after his amazing custom Christian Siriano tuxedo gown he wore for the Oscars earlier this year. He has definitely become one of my favorites to see on the red carpet. He loves fashion and isn’t afraid to take a risk with it. I would love to see his bring the “unexpected” drama to the Emmy Awards red carpet where he is nominated for Outstanding Lead Actor in a Drama Series for her work on the FX series POSE. I feel like Billy is definitely ready to bring Pierpaolo Piccioli’s creative vision for Valentino to life on a red carpet. I think that he would absolutely shut down the Emmy’s red carpet with this blue and gold art nouveau pattern opera coat from the Valentino Fall 2018 Couture collection. I fell in love with this coat the moment I saw it open this show in Paris over a year ago. It hasn’t gotten a major red carpet moment to now and I feel like Billy is the perfect person to give it the daylight it deserves. I could definitely see Billy rocking the whole runway ensemble, but he also love a very tailored suit moment with his capes and trains so I personally would want to see Pierpaolo create a custom gold tuxedo for Billy to match the cape. 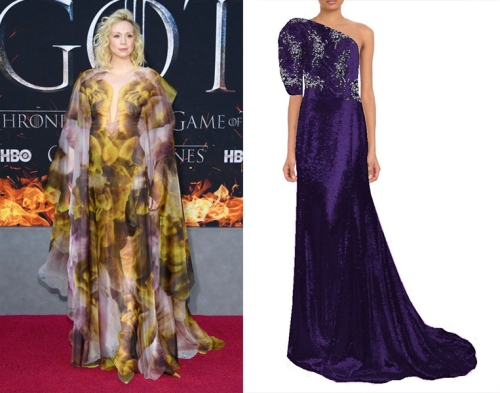 Gwendoline Christie paid her own fees to be included in the written ballots for the 2019 Emmy nominations. HBO did not submit Gwendoline for Emmy consideration. So she took her destiny into her own hands and now she is nominated for Outstanding Supporting Actress in a Drama Series, a category dominated by her and her Game of Thrones co-stars. Now out of the GOT ladies nominated in this category I wouldn’t say that Gwendoline is the favorite to win in this category, but she bet on herself so I want to see her deliver on this red carpet. I know she knows how to wow. She has done so in the past wearing looks from Gucci and Iris Van Herpen on the red carpet. For the Emmy Awards I decided to go with a custom look for Gwendoline from Miu Miu. She closed the Miu Miu Cruise 2019 show last summer and has been a good friend to the brand. I would love to see Miuccia Prada create an absolutely gorgeous dramatically glamorous moment for Gwen to wear on the Emmy’s red carpet. Ahead of creating specific looks for people for Venice, TIFF, and the Emmy Awards I actually had Evita, who creates all the custom look photos for me, go through some of the Resort 2020 collections of brands we see on major red carpets all the time and just go wild with looks. As she would come up with ideas she would send me her edits and I would make adjustments as I thought of things. I cannot take credit for coming up with this deep purple custom Miu Miu Resort 2020 gown which took the short puffy sleeves and embellishments from the collection and created this uber glamorous creation. Given Gwendoline’s height and stature I definitely believe that this gown would be one of the greatest things that she has ever worn. it would flatter her figure and just ooze glamour especially if styled with a vintage inspired updo, defined eyes, soft pink lips, black suede and silver glitter slingback peep toe Miu Miu sandals, and vintage Harry Winston cluster drop diamond earrings. 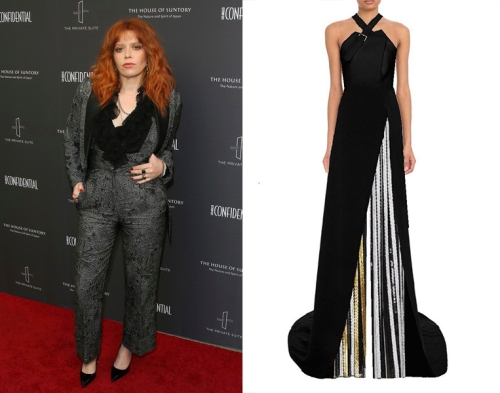 Natasha Lyonne is nominated for 3 Emmy Awards this year thanks to her Netflix series Russian Doll. She is not only nominated for Outstanding Lead Actress in a Comedy Series, but also as one of she shows producers for Outstanding Comedy Series and one of the shows writers for Outstanding Writing for a Comedy Series. One of these awards is handed out at the Creative Arts Emmy Awards held before the main show so Natasha could walk this red carpet on the 22nd as an Emmy Winner already. I have to say I have been loving her style lately and I am really intrigued to see what she will wear on this red carpet this year. I had it in my head since the moment I heard her name announced that Natasha was going to be wearing Proenza Schouler for this red carpet. I loved many of the details in the Proenza Schouler Resort 2020 collection and just threw a bunch of the pieces from that collection into a folder and asked Evita to cook something up. She sent me several options, but it was this look which features a harness halter neckline and an asymmetrically cut skirt with sequined pleated stripe paneling that I fell in love with immediately. The only thing about this look is that it shows more skin that Natasha typically does on the red carpet. So I said well why not add a black Proenza Schouler novelty label wool twill blazer over her shoulders like a cape? It adds that coverage we expect from Natasha, while also infusing a bit of menswear inspiration which is another of her red carpet signatures. I would finish this look with full teased out curls, defined eyes, red lips, a black Tyler Ellis ‘Jaime’ clutch with gold hardware, a pair of Gianvito Rossi t-bar pointed toe pumps, and a selection of Nikos Koulis ‘Feelings’ collection jewels including yellow gold snake cluster earrings with white diamonds and a yellow gold cocktail ring with white diamonds to make sure this look balances edge and glamour in the perfect manner. 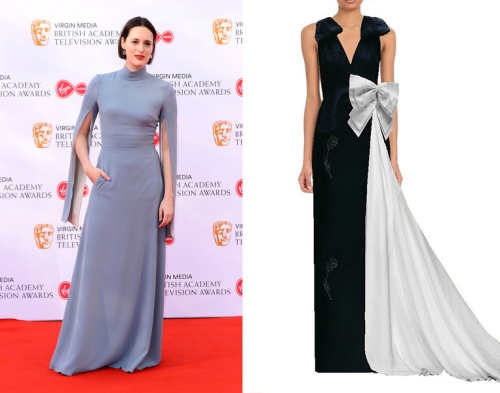 Last up for today is Outstanding Lead Actress in a Comedy Series nominee Phoebe Waller Bridge. I can honestly say I don’t know much about Phoebe or her style, but I am sure that we are going to get to know her and it well over the coming months. It seems like she might be the leading contender to win in this category and I wanted to make sure that I had a glamorous winners moment for her to wear on this red carpet. I wanted to put the British actress in a British designer and so I turned to my favorite British label Erdem. I can always count on Erdem to bring feminine glamour to the red carpet and he knows how to deliver a custom moment on the red carpet as well. I took inspiration for this black and white gown from an ensemble from the Erdem Resort 2020 collection which featured the same bow shoulder hammered silk bodice with a a white pearl embellished bow on the hip and silk pencil skirt with crystal encrusted floral appliques. For this gown I decided the smooth black silk of the skirt was perfect for this gown loosing the peplum from the original bodice turning into a floor length column gown and adding the dramatic white side sash that drapes into a train. I actually knew just exactly what I wanted this gown to look like that I actually sketched it out (very poorly I might add) for Evita so she knew exactly what I wanted. She sent this gown and I was immediately sold on it as the perfect look for Phoebe to wear on the Emmy Awards red carpet. A sleek center parted bob tucked behind the ears, defined eyes, rich crimson red lips, a black Bottega Veneta satin chain knot minaudiere, simple black Aquazzura ‘So Nude’ slingback sandals, and a pair of art deco platinum set white diamond dangle earrings circa 1920’s I found on 1stDibs would finish this look in the most perfect manner from head to toe. Just give her the Emmy to complete this ensemble.