We are getting closer and closer to the 2019 San Diego Comic-Con and I am really excited to see what all of the stars who will make the jaunt to ‘Nerd Mecca’ will rock for their respective panels. DC, Universal Studios, Warner Bros, and Sony Pictures have all announced that they will not be showcasing panels at Hall H to promote their upcoming films at San Diego Comic-Con. That leaves television networks and the possibility of Marvel being in the ranks of what we will see on the stage this year.

Riverdale is confirmed to have a panel at this years San Diego Comic-Con and I have to say that I am really excited to see what some of the cast members will bring to the stage this year. Many of them over the last year have really grown in their red carpet footing. The one that has come the farthest has been Camila Mendes and I am really excited to see what she will bring to the stage at Comic-Con. Will it be something super casual like a jeans, t-shirt, and a blazer? A year ago I would have said yes, but also a year ago I wouldn’t have put Camila on one of these wishes. This year I want to see Camila bring this Prabal Gurung Pre-Fall 2019 ensemble which features a powder blue ruffled peasant style long sleeve blouse and a pair of high waisted flared leg jeans to life for this event. As I have said several times before I want chic, elevated casual moments from everyone at Comic-Con this year and this is definitely exactly what I am looking for. Styling this look with chic waves, defined eyes, pink lips, a pair of navy Jimmy Choo ‘Ava’ pointed toe pumps, and BaubleBar ‘Soraida’ pearl ear crawlers would finish it off perfectly. 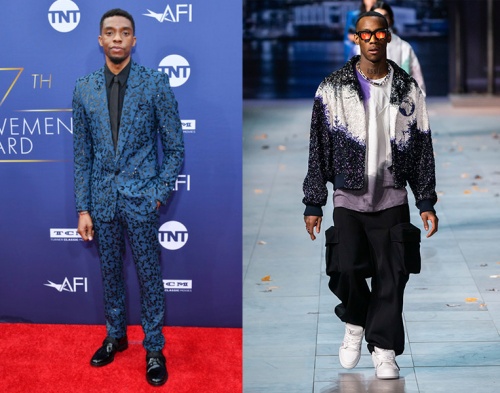 Black Panther 2 is expected to start being talked about soon. Whether that will be at the 2019 San Diego Comic-Con or not is still unclear. Aside from the fact is has been announced that the project is happening we have no other information. The first Black Panther film was announced at Hall H during San Diego Comic-Con back in 2017, but with Disney’s D23 Expo coming next month many experts are expecting that Marvel projects won’t be teased until then. Well given my love for all the cast members of Black Panther I definitely want to see them promoting the upcoming film as much as possible. Chadwick Boseman became a real style heavy hitter as he started the first tour for Black Panther in which he plays the title role. If the film does end up having a panel I want to see Chadwick bring his now signature extra take on menswear to the stage. I would love to see him wearing this white, purple, and black Louis Vuitton Fall 2019 Menswear sequined bomber. It definitely a statement piece and honestly I would allow for it to be the center of focus for the look styling it with a black v-neck t-shirt, fitted black jeans, and a pair of black Giuseppe Zanotti ‘Urchin’ low-top rubberized black technical fabric sneakers.

If my predictions are right then Comic-Con is going to be a very busy time for Danai Gurira. This list is the second of three appearances that I have for Danai in my 2019 Comic-Con wishes. I always get excited when I see her name on a list of guests for any event because I know that whenever she steps onto a red carpet that she will be giving us her all. When some might take an event like Comic-Con and go the easy route of jeans and t-shirts I know that Danai would bring full on fashion to the stage at any panel she is a part of. So for the Black Panther 2 panel at Comic-Con 2019 I decided to go bright, breezy, and feminine with this blue and pink floral print chiffon Philosophy di Lorenzo Serafini Resort 2020 ruffle-accented high neck dress which features ties at neck, dual slit pockets at side, long sleeves with flared cuffs, and a knee-length. This is a flirty, feminine moment that definitely caught my eye the moment I saw it. I would ditch the heavy suede slouchy boots that the look was paired with on the runway in favor of a pair of magenta suede Aquazzura ‘Forever Marilyn’ tassel detailed pointed toe pumps finishing the look with a chic teased hairstyle, defined eyes, pink lips, and Anita Ko ‘Floating Ruby’ earcrawler earrings to ensure that this look is the perfect definition of elevated casual elegance.

Letitia Wright really got her red carpet footing over the course of the promo tour for Black Panther. Since then she has become quite a fashionista, but in her own right and manner. She has delivered a lot of pants looks this year, but my favorite look from her was a sheer Georges Chakra Couture tea length tulle gown that she wore for the NAACP Image Awards earlier this year. I definitely went for something very out there for her to wear on the stage at Hall H during San Diego Comic-Con picking this blue, pink, and green watercolor print Coach 1941 Fall 2019 RTW long sleeve peasant dress with a tiered handkerchief style dress. Now while this dress is definitely a little on the extra side for Comic-Con I definitely thing it would look amazing on Letitia. Coach has been a very friendly brand to the actress after taking her as a guest to last years Met Gala and dressing her for several other red carpets. She has the subdued presence to really take this difficult to wear dress making it her own especially if she paired it with short braids, defined eyes, glossy nude lips, a pair of lime green Alexandre Birman ‘Clarita’ ankle tie suede sandals, and Mateo New York 14k gold & diamond ‘Half Moo’ pearl mismatched earrings.

I can’t talk about the cast of Black Panther without including a wish for the always gorgeous Lupita Nyong’o. Honestly this cast is one of the most fashionable ensembles out there and Lupita definitely brings her a-game when she is out with this cast. I want to see her deliver a really chic moment for her to deliver the look on the stage for the Black Panther 2 panel at San Diego Comic-Con. I immediately went to Monse for the perfect look for Lupita. I LOVE this black, navy, and camel plaid Monse Resort 2020 asymmetrically draped dress which features chic ruched details and can definitely easily picture it on Lupita. It is a chic casual moment and with a chic casual updo, dark red glossy lips, black leather Paul Andrew buckled sandals, and a pair of Hanut Singh ‘The One’ carved emerald and diamond drop earrings I know that Lupita would definitely help preside over Comic-Con in style.