With so many wishes expected to come over the next seven days as we head into BAFTA and Grammy week I have to hit up two sets of wishes a day. The BAFTA Awards are always something I get excited about. It is always a very glamorous night, but looks can depend on how willing to brave the cold of a London night a star is. For the most part stars will brave the cold in sleeveless and strapless gowns and I always applaud those who do.

Claire Foy is nominated for Best Actress in a Supporting Role for her performance in First Man. I won’t lie when I say that I really don’t remember her performance. It wasn’t the most memorable role, but I know that Brits love to nominate other Brits. I hope her look on this red carpet is fabulous. It is her first BAFTA Awards and I want her to do it in high style. I would love to see her rock this red carpet with this black and white shirred tulle strapless Schiaparelli Spring 2019 Couture a-line tea length gown. Claire isn’t my favorite red carpet star, but I know she has potential and I definitely think that this gown would make for a perfect moment for her. She tends to go for more of a modern look after her period roles, but I feel like this look is more fantasy than vintage. I would finish it with a vintage inspired updo, defined eyes, red lips, black sequin detail Aquazzura ‘Studio’ strappy sandals, and vintage Harry Winston diamond wave ear clips to really ensure that this look is glamour from head to toe.

Glenn Close has won the Golden Globe, Critics Choice, and SAG Award for Best Actress for her performance in The Wife. I wonder if she will make it a four-peat this coming weekend taking home the BAFTA as well. I think she is the favorite on paper, but she could be upset by The Favorite star Olivia Colman. I want Glenn to be on top form in case there isn’t an upset and she does take home the trophy. I turned to this black velvet Osman Spring 2019 RTW asymmetrical tuxedo inspired wrap gown as the starting point for a really chic moment for Glenn to bring to life on this red carpet. I would then call up the Osman team and ask if it could be customized to add a train, and maybe bring the them closer to the floor, but still keep some of the asymmetrical hem details. I feel that with a train that this would really be the perfect moment for Glenn to bring to life on this red carpet especially when paired with a black Roger Vivier ‘Club Chain’ clutch detailed with a gold tassel detail buckle, her signature whispy pixie, defined eyes, red lips, black and gold Malone Souliers ‘Morissey’ pointed toe pumps, and vintage Bulgari heart shape ruby and diamond chandelier earrings.

Letitia Wright has been laying low all awards season despite all the hype behind her film Black Panther. I am really hoping she will make it out for the BAFTA Awards where she is nominated for the EE Rising Star Award. Over the course of last year Letitia quickly went from wearing seasons old looks to custom couture and became one I really got excited when she was confirmed to attend any event. I want to see her bring the drama to the red carpet next Sunday on the BAFTA Awards red carpet with this light brown Maticevski Spring 2019 RTW ‘Angels Trumpet’ halter gown which features a plunging V-neckline with a ruffled collar and pleated a-line skirt. I always love a great use of Maticevski on the red carpet and I definitely think that Letitia would own the red carpet in this very chic gown. The gown itself is such a statement I would just add a chic twist updo, defined eyes, rose pink lips, strappy black Jimmy Choo ‘Mimi’ sandals, and a pair of Hanut Singh ‘Supremo’ green amethyst, enamel, diamond, and ruby tassel earrings to ensure perfection.

As I said earlier I definitely think that Olivia Colman could upset Glenn Close in the Best Actress in a Leading Role category for her performance in The Favourite. The voting body of the BAFTA’s definitely tend to vote for Brits so I definitely think that Olivia could be a favorite to win this trophy. She has worn nothing but British designers all awards season long and what better British label to wear for this red carpet than Alexander McQueen. It is the ultimate in British glamour and I think that taking this black long sleeve Alexander McQueen column gown which features silver embellishments, a v-neckline, and peplum waist and adding a dramatic train would definitely ensure that Olivia owns her home court red carpet. It would be incredibly regal and glamorous and I definitely believe that with a pair of black Roger Vivier satin crystal embellished flower buckle sandals, a sleek hairstyle, defined eyes, soft rose pink lips, and vintage Fred Leighton art deco diamond pendant earrings would all ensure that Olivia reigns supreme on this red carpet. 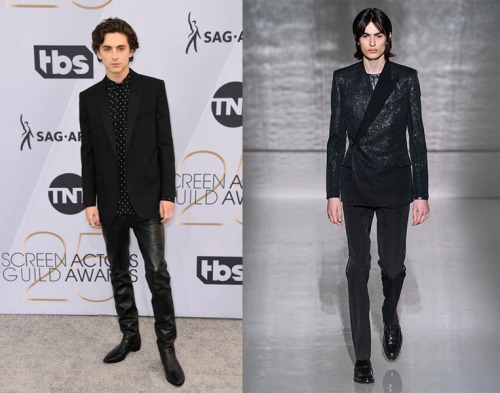 Timothee Chalamet’s nominated awards season ends this weekend at the BAFTA Awards. I personally believe that he should have won every single award he has been nominated for thanks to his performance in Beautiful Boy. But instead he has lost everything and was snubbed at the Oscars. I want to see him bring a really great moment to the red carpet at the BAFTA Awards. He almost always does and I saw this asymmetrical black Givenchy Spring 2019 Couture double breasted metallic fiber suit paired with a matching metallic t-shirt come down the runway and it just screamed Timmy to me. I think it is the more sleek and glamorous side to Timothee’s style, and I think that is exactly what he needs to bring to the BAFTA Awards red carpet. A pair of black patent leather Christian Louboutin ‘Samson Orlato’ chelsea boots would add the perfect finishing touch to this ensemble.