January was an incredibly glamorous month. It was filled with all kinds of major eye catching moments. From all the amazing looks at the Golden Globe and Critics Choice Awards to smaller awards events, parties, movie premieres, front row at Paris Couture Fashion Week, and sidewalk style. Narrowing down this list to just my 10 favorite looks from the first 31 days of 2019 was incredibly difficult. I don’t include looks that I included in any of the individual event best dressed lists. So we won’t see anything from the Golden Globes or Critics Choice Awards. I was underwhelmed in general with the SAG Awards red carpet so I did consider looks from that red carpet for this list. 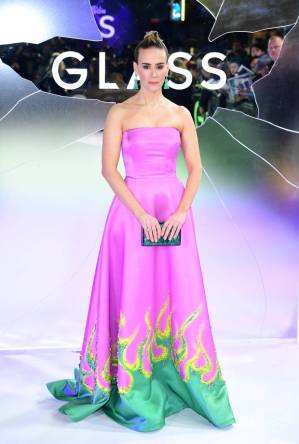 1) Sarah Paulson in custom Prada at the London premiere of Glass: There was absolutely no doubt in my mind the moment I saw Sarah Paulson step onto the white carpet at the London premiere of Glass that she would end up on the top of my Best Dressed of January list. She delivered a major Best Dressed of the Year worthy moment on that red carpet wearing a hot pink and jade green custom Prada strapless gown which features flames engulfing the hem of the gown. I honestly never would have expected this gown from Sarah and she is really selling it to me. It was paired with an emerald Edie Parker clutch, lime green satin platform sandals, custom emerald and chrysoprase Irene Neuwirth tassel earrings, and a faux fur cropped coat (not pictured.) You never would have known that the high temperature in London the day of this premiere was only 47° F and the low was 28°  F. Will this look stay in my good graces for the next 11 months and make the Best Dressed of the Year list? Probably.

2) Lady Gaga in Schiaparelli Couture at her Jazz & Piano Las Vegas Concert Residency: January might not have been exactly the winning month I was expecting Lady Gaga to have, but she has been pretty much killing the game when it comes to fashion. I expected that. Most of her Las Vegas residency at the MGM Grand is the edgy “Enigma” show, but she also has a few dates that are “Jazz & Piano” nights where you see Gaga giving big band performer realness. She traded in her Tom Ford and Atelier Versace catsuits for glamorous gowns for those Jazz & Piano nights and I was definitely blown away. The most wow moment was a hot pink silk Schiaparelli Couture opera coat which was paired with a strapless black velvet gown and matching black velvet opera gloves. It is almost similar to the periwinkle gown that Gaga wore for the Golden Globe Awards, but better. It was easily one of my favorite of Gaga’s performance looks ever.

3) Lady Gaga in custom Ralph Lauren at the National Board of Review Awards: I also am giving Gaga the third spot on this months Best Dressed list for the femme fatale moment she delivered on the red carpet at the National Board of Review Awards. She was honored with the Best Actress award and she definitely delivered the moment in spades. Her custom black crystal embellished Ralph Lauren tuxedo gown with a dramatic train and a black and gold feathered cape carried as a pouf made my heart beat. I love unapologetic glamour and Gaga knows how to sell it. She could easily pull this look out of her closet for her Jazz nights in Vegas. Will she?

4) Emily Blunt in custom Michael Kors at the SAG Awards: As I said earlier I was really disappointed this year with the SAG Awards red carpet in general, but there were a couple of really chic bright spots. The one that stood out to me most was this bubblegum pink custom Michael Kors gown that Emily Blunt wore. It was a very chic column gown that was given a dramatic flare with that ruffle around her shoulders and Emily really made it work. Some could get lost in those ruffles, but Emily powered through them with a regal ease. Her simple updo, matching pink lips, Forevermark diamond earrings, and white Jimmy Choo clutch all perfectly complimented this gown.

5) Rowan Blanchard in Marc Jacobs Spring 2019 RTW at the WB/InStyle Golden Globes After-Party: Rowan Blanchard has been one of my favorite young stars for a while now and I got very excited when I saw her step onto the red carpet at the Golden Globe Awards after-party hosted by Warner Brothers and InStyle wearing this frothy pink Marc Jacobs Spring 2019 RTW one shoulder mini dress. She gave me major couture cupcake vibes and totally sold it to me. On most I think that the ruffles of this gown would be very overwhelming, but Rowan really pushed through all of those layers. She debuted a new pixie cut with this look and it added to her vintage vibes with 1920’s inspired makeup. Overall this looked like a flapper meets 80’s prom moment and on paper it shouldn’t work, but on Rowan it does.

6) Celine Dion in Maison Margiela Fall 2018 RTW out and about in Paris: When it comes to style I have always loved me some Celine Dion, and in January she took some time to make the rounds during Paris Haute Couture Fashion Week and take in some time in Paris. She gave several chic street style moments, but my favorite was a yellow utility style maxi dress paired with a grey wool and white cable knit blazer from the Maison Margiela Fall 2018 RTW collection. Honestly this looks like something we would expect to see from Gigi or Bella Hadid, not Celine, but she really sold it to me. I think it was such of an unexpected moment that made me really love it. She decided to not go the heels route like she usually does, but instead paired this look with Maison Margiela clunky white and gold sneakers. Again it is very early twenty something model of the moment and Celine is wearing it with ease.

7) Jaime King in Maticevski Resort 2019 at the WB/InStyle Golden Globes After-Party: The Golden Globes after parties definitely delivered some chic moments on the red carpet. Jaime King always knows how to shut down the red carpet and she definitely did that with this black, champagne, and pink floral print Maticevski Resort 2019 origami drapes ball gown. This is definitely not an easy gown to pull off. There are a lot of details going on here, but Jaime was able to make this a very chic effortlessly glamorous moment. Her chic updo, bold makeup, drop earrings, and pumps all perfectly compliment this gown.

8) Alison Brie in custom Miu Miu at the SAG Awards: Bondage couture can be very hard to pull off on the red carpet, but Alison Brie did it in a custom Miu Miu gown at the SAG Awards. I won’t lie it took me a second to warm up to this gown, but by the end of the red carpet I was definitely in love with this black custom Miu Miu gown which features a column silhouette, strapless neckline, a crystal embellished dramatic bow on the back, an attached collar, and two bows detailed on the waist of the gown. The look is bold from the front, but honestly it was all about the back. It reminded me a lot of what Claire Waight Keller had just sent down the Givenchy Haute Couture runway days before this red carpet. In fact I initially thought it was a custom Givenchy gown. It worked and it was one of the best things that Alison has ever worn. She let the gown do most of the talking keeping her styling and beauty very simple. Overall this was obviously one of my favorite looks that night.

9) Laura Harrier in Cushnie Pre-Fall 2019 at the Palm Springs Film Festival Awards Gala: January kicked off with the annual Palm Springs Film Festival black tie awards gala. It almost always delivers a look that makes the Best of January list and has gone on to deliver Best Dressed of the Year worthy moments several times. This year it was Laura Harrier who really wowed me. It was one of the few red carpets so far this awards season that Laura hasn’t worn Louis Vuitton on. Instead she oped for a very chic and sleek white Cushnie Pre-Fall 2019 strapless gown which features a sequined top, sheer paneling at the waist, and a column skirt. This gown was that chic moment I always expect from Laura. It kicked off her awards season in high style. It was just a chic moment.

10) Nicole Kidman in custom Miu Miu at the AACTA Awards: Finishing out the list is the gorgeous Nicole Kidman in a custom Miu Miu gown at the AACTA Awards. Ahead of the Golden Globe Awards Nicole rocked this red carpet wearing this custom Miu Miu gown which features a black column skirt and a white ruffled bodice. It wasn’t something I would expect Nicole to wear for a smaller red carpet like this. I would have expected this from her at the Golden Globes, but I think the fact that it was for one of the smaller red carpets this awards season thus far that it was just that much more impactful. Everything about this look was styled perfectly and Nicole just looked absolutely regal.

One thought on “Best Dressed of January 2019”