I have so many wishes to make for this years Screen Actors Guild Awards. But as I am waiting for the couture collections to come out next week I didn’t want to go through two or three posts worth of wishes in a day like I did with the Golden Globe Awards. That happens almost every year with the SAG Awards. I wait until the last possible minute to start my wishes because I want as many of them to be filled with the hot new things. That’s why you might feel like there is more menswear on the wishes for the next few days. Menswear shows are just getting ready to wrap up and so I have all kinds of hot new things for the men to wear, but women also feature in these wishes too.

Darren Criss has swept awards season taking home the Emmy, Golden Globe, and Critics Choice Award for his portrayal of Andrew Cunanan in The Assassination of Gianni Versace: American Crime Story. He has been serving interesting sartorial choices at each of those awards shows. It was embellished Emporio Armani at the Emmy Awards, floral Dior Man at the Golden Globes, and casual “Miami Vice” chic in Giorgio Armani for the Critics Choice Awards. The SAG Awards is the final stop on the awards train for Darren where I would say he is the favorite to sweep all the major awards shows by taking home the Actor trophy for Outstanding Performance by a Male Actor in a Miniseries or Television Movie. I would love to see Darren do so in high style wearing this black and dusty burgundy gingham plaid Ermenegildo Zegna Fall 2019 Menswear double breasted suit which features abstract shiny pattern all over the jacket and slim fit pants. It is one of the best suits of all of the new menswear collections and it is that perfect mix of extra and casualness to be a perfect choice for the SAG Awards red carpet. Would Darren wear the suit as presented on the runway with a matching dusty burgundy tonal collar t-shirt for the SAG Awards? His Critics Choice look says he might. I would personally want to see a custom dusty burgundy button down collard shirt adding a slim black silk skinny tie. A pair of black leather and burgundy quilted velvet Louis Leeman lace up derbies would add the perfect finishing touch to this ensemble. 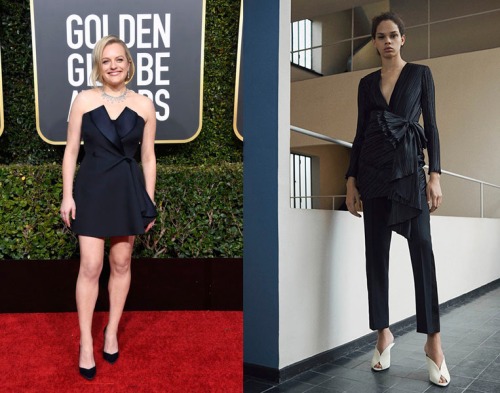 Elisabeth Moss tends to pick short black dresses for the red carpet, and that is exactly what I am expecting from her next Sunday at the Screen Actors Guild Awards. She is nominated for Outstanding Performance by a Female Actor in a Drama Series for her role in The Handmaid’s Tale. I stuck to the color black, but I went a different style route opting for this black Givenchy Pre-Fall 2019 pants ensemble which features a long sleeve pleated top with a v-neck, asymmetrical hem, and a draped bow and a pair of matching slim fir cropped pants for her to wear for this red carpet. I really do want to see Lizzy give us something a little different on this red carpet and I believe that this pants look is the right change of pace to be a breath of fresh air. A wavy bob, defined eyes, red lips, a pair of black Gianvito Rossi ‘Rea’ crystal embellished mesh pointed toe pumps, and statement Butani diamond and emerald earrings would all make this an absolutely beautiful moment for Elisabeth to deliver on this red carpet.

The fifth season of Grace and Frankie dropped on Netflix today so you know that is what I will be watching all weekend as I write more and more of my 2019 SAG Awards wishes. I adore Jane Fonda and her role in the series has earned her another SAG nomination for Outstanding Performance by a Female Actor in a Comedy Series. She hasn’t actually attended any of the previous SAG Awards where she has been nominated for the series, but with the new season being so fresh I could see Netflix wanting to see her keep up appearances and walk the red carpet this year. I thought about waiting for a couture gown for Jane to wear on this years red carpet, but then I saw this Zuhair Murad Pre-Fall 2019 ensemble which features an intricately beaded gold bodice with a v-neckline and fringe details and a pair of black flared front seam pants. The more laid back vibe of the SAG Awards I think would allow for Jane to really make this look work. A black Roger Vivier ‘Club Chain’ gold buckle and tassel detail clutch, her signature hairstyle, smokey eyes, soft nude lips, a pair of black and gold Roger Vivier ‘Choc Real Onda Passementeie’ pumps, and a statement Bulgari High Jewelry ‘Parentesi’ gold and pave diamond collar necklace would make this the perfect look for Jane to wear on her first SAG Awards red carpet. 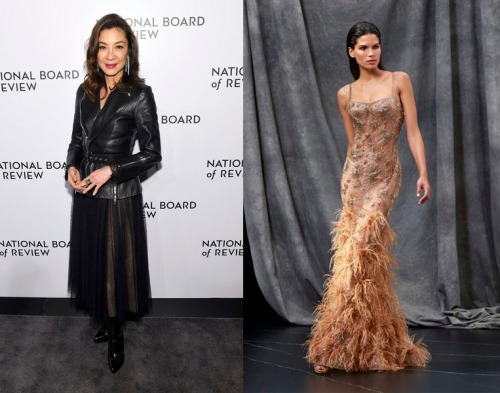 Michelle Yeoh has been giving chic looks all awards season, but I haven’t been truly wowed. My favorite look so far this awards season was the one shoulder red Marchesa gown that she wore for the Critics Choice Awards. I think that the cast of Crazy Rich Asians has a real shot taking home the Outstanding Performance by a Cast in a Motion Picture trophies. I want to see Michelle bring her absolute a-game to the red carpet. She knows how to bring major couture to the red carpet and defies what society says a 56 year old woman should wear on the red carpet. That is why I picked this nude Roberto Cavalli Couture gown which features spaghetti straps, a fully beaded bodice, and a feathered mermaid hem for her to deliver on this red carpet. This glamorous gown is definitely something I think Michelle would wear. She might ask for a matching beaded sheer shawl to be paired with this gown, but I love it just as it was presented. I think that with old Hollywood waves, defined eyes, soft pink lips, a pair of gold Salvatore Ferragamo ‘Zeri’ bow detail metallic leather pointed toe pumps, and lotus cut Chopard Red Carpet Collection yellow diamond chandelier earrings would all add the perfect finishing touches to this ensemble.

Penelope Cruz shocked me when she opted for a Ralph & Russo Couture ballgown on the Golden Globe Awards red carpet over one from Chanel. I would have expected the current face of Chanel to wear Chanel for the first major red carpet of awards season, but that didn’t happen. I wonder if she will wear the brand for the SAG Awards? She could snatch a gown right off the Chanel Spring 2019 Couture runway next week, and I think that is probably what is going to happen. However I fell in love with the idea of seeing Penelope wearing this champagne gold Armani Prive Fall 2018 Couture strapless fully beaded column gown so I wanted to keep that as my wish and not wait for anything new from Chanel. This simple gown is perfect for Penelope who knows how to deliver classic glamour with ease on the red carpet. I think that while the gown gives distinct 90’s vibes that a sleek 50’s inspired updo, smokey eyes, red lips, a vintage gold Chanel box clutch minaudiere, gold Christian Louboutin ‘New Very Prive’ peep toe pumps, and a pair of vintage Cartier diamond and emerald pendant earrings would all ensure this look is perfect head to toe.

I was expecting really major things from Rami Malek this awards season, but aside from a red Berluti suit I have been rather disappointed. He has fallen in the winners track rut picking just wearing safe menswear options for the red carpet. Has the fit on all of his looks, mostly from Givenchy, been on point? Yes. But perfect tailoring is only one part of what I love about Rami’s typical styling. I decided to stay on the safer side with my wish for him to wear on the red carpet at the SAG Awards next weekend, but still push the boundaries of menswear. I love this black prismatic checkerboard pattern Emporio Armani Fall 2019 Menswear tuxedo and I think that it would still be considered a rather ‘safe’ option, but still be one of the more statement menswear moments on the SAG Awards red carpet. The pattern changes depending on the way that the light catches it. I think that a pair of black patent leather boots, a crisp white tuxedo shirt, and a black bow tie would all make this a very chic menswear moment on this red carpet.