The Screen Actors Guild Awards is one of the most important awards shows of awards season. It gives us a real sense of who is going to be honored at the Oscars and so the eyes of critics are always on who gets nominated and wins one of the coveted aged bronze ‘Actor’ trophies. Of course the SAG Awards don’t just celebrate movies, but also television. The vibe on the red carpet at the SAG’s is one of the more laid back of the season. We don’t tend to see big couture princess moments on this red carpet. Instead we see chic column gowns, bias cuts, mermaid gowns, tea length dresses, chic cocktail moments, and jumpsuits. Basically stars are free to have as much fun as they want on this red carpet. 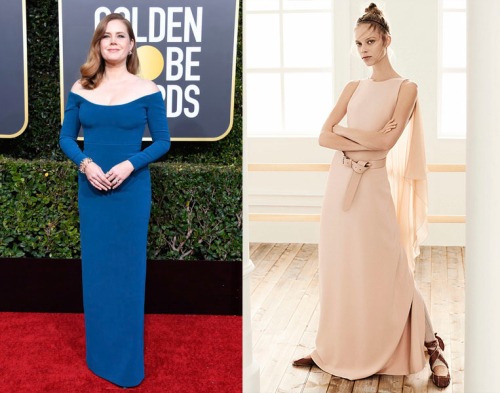 I found the perfect SAG gown for Amy Adams back in early December when the Max Mara Pre-Fall 2019 collection was released. So far this awards season Amy has yet to really make my heart flutter. Her custom Calvin Klein gown at the Golden Globes was chic, but simple, and her Zac Posen gown at the Critics Choice Awards was a disaster. Now I thought heading into awards season that Amy was a lock to sweep the Best Actress in a TV Movie/Limited Series categories all the way. So when she lost the Globe I was shocked. She did tie with Patricia Arquette, who won the Globe, at the Critics Choice Awards. So I am really interested in seeing what will happen at the SAG Awards next Sunday. I want Amy to deliver a really chic moment on that red carpet with this blush pink Max Mara Pre-Fall 2019 sleeveless column gown which features a chiffon cape back. I loved the gown immediately and then I pictured it on Amy with her peaches and cream complexion and flame red hair and it just was a vision I fell even more in love with. Now the gown isn’t boundary pushing at all, but sometimes staying in ones wheel box and doing it really well is the key to a perfect red carpet moment. I would want to see Amy pair this gown with a loose romantic updo, soft smokey eyes, antique rose pink lips, a pair of nude Christian Louboutin ‘Cosmo’ gold trimmed and PVC detailed pointed toe pumps, and a selection of major Cartier High Jewelry pieces including pink gold and diamond drop earrings and a statement ‘Paris Nouvelle Vague’ pink gold, diamond, and pink pearl cuff bracelet to really make sure that it is head to toe perfection. 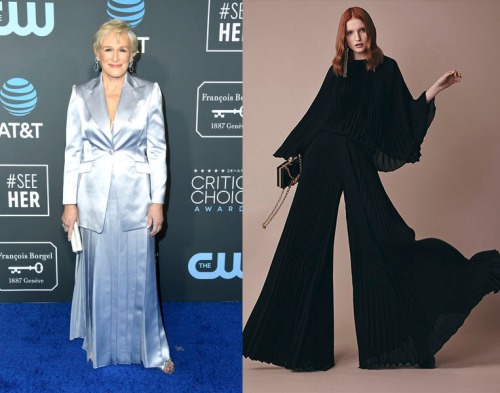 Glenn Close might have given me a Best Dressed worthy moment in custom Armani Prive at the Golden Globe Awards, but she had me scratching my head with her matching ice blue satin custom Gabriela Hearst jacket and gown at the Critics Choice Awards. As one of the three front runners in the race to Oscar gold I think that she needs to get on her stride and get back on track. The SAG Awards could be a big night for Glenn. She could walk away with the Actor trophy, which would make her the favorite to win the Oscar. So I want to see Glenn on top form on this red carpet. I thought I knew what I wanted to see Glenn wearing on this red carpet, but then yesterday the Elie Saab Pre-Fall 2019 collection was released and I fell in love with this black pleated ensemble which features a handkerchief hem caped blouse and a pair of matching palazzo pants. Glenn has been wearing a lot of two piece ensembles, black, and pants on the red carpets so far this awards season and I think that this look would be perfect for her to wear for the SAG Awards. On most I wouldn’t think that this look is appropriate for the SAG Awards red carpet, but I really do believe that it is something that Glenn would be able to make work. I would add a pop of color with a multicolored floral sequin Elie Saab Spring 2019 clutch, simple black velvet Jimmy Choo ‘Romy’ pointed toe pumps, a chic pixie, defined eyes, soft pink lips, and a pair of Maxior Joais ‘City Light’ yellow gold and white topaz chandelier earrings to really make this a beautiful moment for Glenn to deliver on the SAG Awards red carpet. 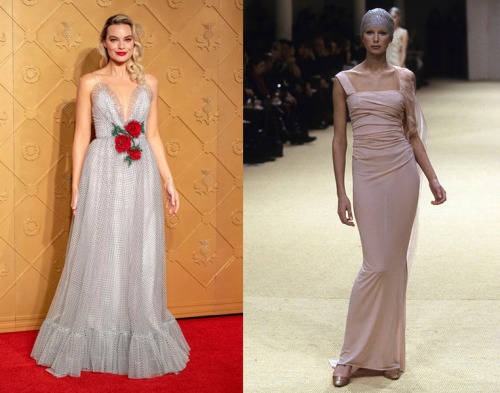 Margot Robbie was a surprise nomination in the category for Outstanding Performance by a Female Actor in a Supporting Role in a Motion Picture. Mary Queen of Scots didn’t end up getting as many nominations as anyone was expecting from it. So when Margot became the only member of the cast to be nominated I was surprised. She is a Chanel ambassador and I would guess that it is very likely that she will wear the brand on the red carpet. Next week is the latest Chanel Couture show and I would bet that Margot will most likely snatch a gown from the collection right off the runway. I thought about moving her off this set of wishes waiting for that show, but then yesterday Vogue Runway released images from the Chanel Spring 1999 Couture collection in their throwback countdown to this years new collections. I flipped through the looks and there were so many to love and so I decided that I wanted to see Margot go vintage for the SAG Awards red carpet. I had many really great options for Margot to wear on this red carpet, but I feel like this blush pink draped column gown from that Chanel Spring 1999 Couture collection which features thick straps and organza strips draped from one shoulder is perfect for her to deliver on this red carpet. It is chic and glamorous, and I believe that Margot would add her inherent sex appeal really making this a perfect moment. A romantic wavy updo, defined eyes, soft pink glossy lips, a blush pink Edie Parker ‘Wolf’ pearl effect acrylic clutch, blush satin Aquazzura ‘Gem Palace’ crystal embellished ankle cuff sandals, and a pair of Tiffany & Co. Blue Book Collection pink morganite and diamond drop earrings would all be the perfect finishing touches to make sure this beautiful vintage gown is red carpet ready. 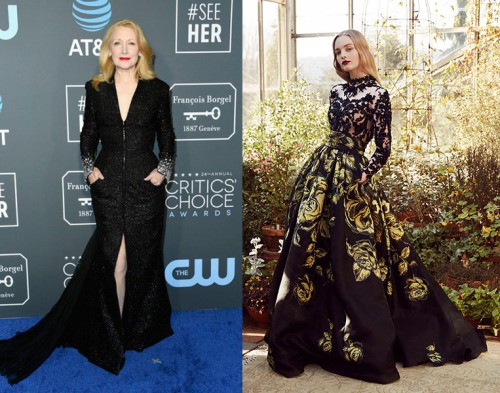 Patrica Clarkson has been continuing to prove why I gave her the Sexy at Any Age award last year in my End of the Year Style Awards as she has made the rounds this awards season. For the first two major red carpets of the year Patricia wore two looks from Georges Chakra Couture Fall 2018. The first was a fire red and orange draped gown for the Globes and then she gave femme fatale glamour in a structured black gown at the Critics Choice Awards. Will she make it a three-peat at the SAG Awards? She did win in the designers creations at both of those awards ceremonies. So is he going to be her good luck charm? Anything is possible. I do however want to see Patricia give us another major moment wearing this black and gold Marchesa Pre-Fall 2019 embroidered floral jacquard ballgown which features with a mock neckline, an illusion tulle long sleeved bodice and a full A-line skirt. She was the first person I thought of when I first saw this gown back in early December and I have been waiting for the right red carpet to use this gown and that time has come. The gown is such a statement that I think simpler styling with a sleek updo, smokey eyes, red lips, a pair of black and gold Malone Souliers ‘Mika’ sandals, and Maxior Joias ‘Radiant’ green tourmaline and chocolate diamond drop earrings would make this another best dressed worthy moment. 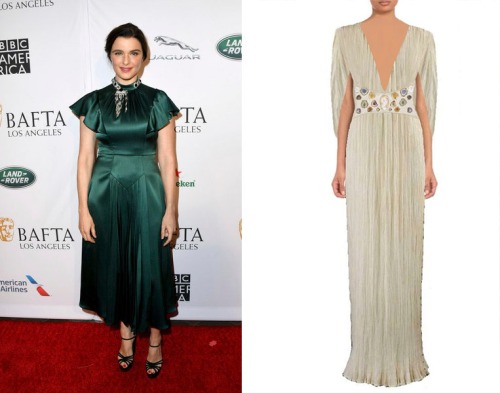 Rachel Weisz looked chic wearing a custom Celine by Heidi Slimane gown at the Golden Globe Awards and completely skipped the Critics Choice Awards. I would expect that with her nomination in the Outstanding Performance by a Female Actor in a Supporting Role in a Motion Picture will mean the we see her back on the red carpet next Sunday evening. She is a Chloe stan and I am sure that at some point we will see her in a custom gown from the label. I decided to take to the Chloe Spring 2019 RTW collection to take inspiration for the custom gown I would love to see the brands creative director Natacha Ramsay-Levi create for Rachel to wear on this red carpet. There was a definite reference to vintage Mariano Fortuny in the collection with some of the pleated silk chiffon pieces that dotted the collection. I decided that was the route I wanted to go down to create the perfect gown for Rachel. So in fact I found a vintage Fortuny gown that I think still feels modern and very much in the Chloe wheelhouse as the starting point for the gown. So the base of the gown is that Fortuny pleated antique eggshell column gown which has a caped sleeve. I modified the neckline to create deep plunging v-neckline. Another detail from the Chloe Spring 2019 RTW collection that I loved were stone embellished harnesses. While I didn’t go full harness I did add a matching cream leather belt embellished with sliced geode embellishments. The gown is that perfect meshing of glamour and bohemia and I think that is what makes for a perfect SAG Awards red carpet moment. A romantic updo, smokey eyes, nude lips, and simple gold Gianvito Rossi ‘Portofino’ sandals all would add the perfect finishing touches to this ensemble. 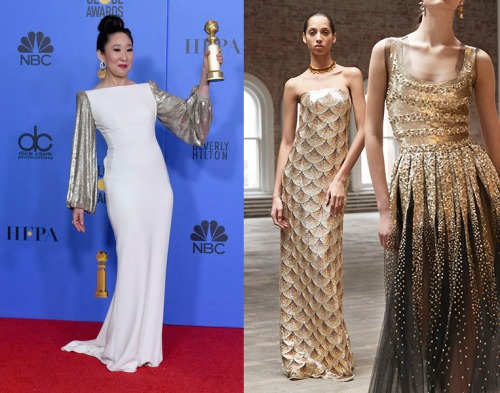 Sandra Oh delivered fashON in a major way during her night hosting the Golden Globe Awards. It made me ignite a fire about her style again. She has also been on fire sweeping the Globes and Critics Choice Awards in the Best Actress in a Drama Series for her role in Killing Eve, and she is likely to make it a three-peat next weekend at the SAG Awards. I went simple and sparkly for with this gold Oscar de la Renta Pre-Fall 2019 strapless column gown which features a straight neckline, floor length, and all-over embellished metallic embroidery scalloped throughout for the perfect gown for Sandra to wear on this red carpet. I really do love this gown and I have a feeling we will see it worn sometime before the end of awards season. It reminds me of a Marchesa gown that Sandra wore a long time ago and maybe that is why I cam imagine her rocking this gown on a red carpet. I would style it with a sleek high bun, smokey eyes, dark antique rose pink lips, a pair of gold Jimmy Choo ‘Lane’ crystal embellished crossover ankle strap sandals, and Hanut Singh ‘Regina’ drop earrings made of mandarin garnet, tourmaline, prehnite, pearl, and diamonds to ensure that this looks translates on Sandra as beautifully as I know it could,