Yesterday I saw a list of a bunch of presenters slated for Sunday night’s Critics Choice Awards, and it is making me even more excited to about what is coming. I have been loving what stars are serving this awards season so far and I know that we are just at the beginning. The Critics Choice Awards is one of the more ‘casual’ of the red carpets and I want to see all the nominated and presenting stars really bring their a-game. If the last week and a half have anything to say about it they definitely will. 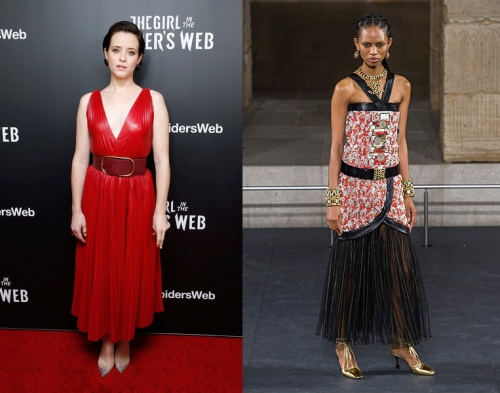 Claire Foy is nominated for Best Supporting Actress in a Movie for her role in First Man and will receive the #SeeHer honor presented to her by last years winner Viola Davis. The #SeeHer Award recognizes a woman who embodies the values set forth by the #SeeHer movement — to push boundaries on changing stereotypes and recognize the importance of authentic portrayals of women across the entertainment landscape. Claire has long been an advocate for equal and accurate representation of women in film and television so she is a perfect recipient of this award. I want to see her bring chic fashion to the red carpet with this black, red and gold Chanel Pre-Fall 2019 halter gown which features black banding, intricate beading, and a sheer metallic pinstriped tea length skirt. The look is definitely more intricate than what we typically see from Claire, but I believe that it would be just the right moment for her to bring to life for the Critics Choice Awards especially when paired with a sleek pixie, smokey eyes, soft pink lips, and a pair of black Sophia Webster ‘Nicole’ naked ankle wrap sandals. 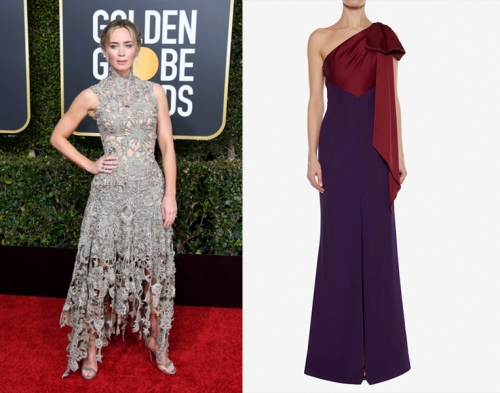 Emily Blunt wore an intricate hand embroidered 3D lace Alexander McQueen gown on the red carpet at the Golden Globe Awards this past weekend. I go back and forth about whether I liked it or not. I honestly believe that it was just the fact she wore it at the Globes that makes me not like it. It would have been a perfect gown for a Mary Poppins premiere or even for the SAG Awards later this month, but it didn’t work at the Globes. I want to see Emily once again turn to McQueen with this deep ruby red and amethyst purple one shoulder gown which features a bow detail on the shoulder and a center split for the Critics Choice Awards red carpet this weekend. Would she opt for the same designer for a major red carpet so close to a previous outing? I don’t know, but I really do believe that Emily would be the epitome of glamour wearing this gown on the Critics Choice red carpet. I would pair it with a black Roger Vivier ‘Boite De Nuit Maharaja’ crystal and feather embellished clutch, a sleek updo, defined eyes, soft pink lips, a pair of black Sophia Webster ‘Rosalind’ crystal heel strappy sandals, and a pair of Cartier diamond and ruby pendant drop earrings to really ensure this look is head to toe perfection for this red carpet. 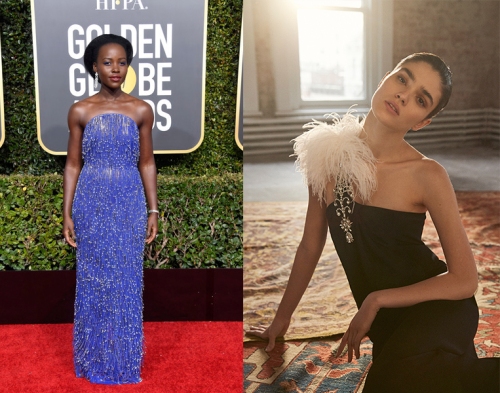 Will Lupita Nyong’o follow her Best Dressed list topping Calvin Klein by Appointment at the Golden Globe Awards with another really major moment on Sunday at the Critics Choice Awards? She is always one of my favorites to see on a red carpet so it wouldn’t surprise me. Originally I had another yellow Versace moment on this list for Lupita, but I figured that since my wish for her to wear for the Globes was a custom yellow Atelier Versace gown that I would go back to the drawing board and the moment I did I thought of this black Oscar de la Renta Pre-Fall 2019 shoulder gown which features white feather and crystal embellishments on the shoulder and a straight silhouette. I was trying to place the perfect person to bring this gown to life and it was a perfect pairing that just clicked when I saw it. Lupita wouldn’t be overwhelmed by that white feather pouf close to her face in fact I think she should add more feathers via a black Jimmy Choo ‘Cloud’ feather clasp clutch. Add a vintage inspired updo, smokey eyes, red lips, a pair of black patent leather Jimmy Choo ‘Bing’ mary-jane mules, and simple vintage Cartier art deco diamond drop earrings and I know that Lupita would be delivering another swoon worthy moment on this red carpet. 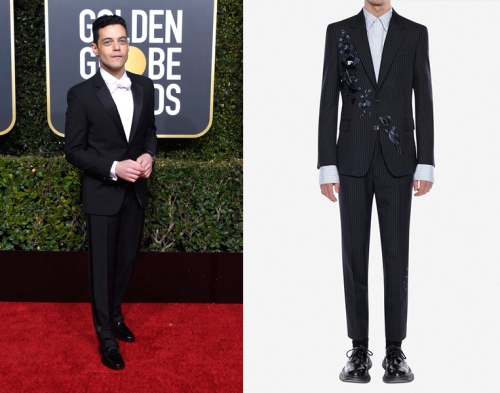 I was hoping that Rami Malek was going to be one of the more boundary pushing stars this awards season, but I don’t think that isn’t going to be the case. I think he will do perfectly executed menswear, that may or may not have some subtle details about them. After his Golden Globe win this last weekend it seems like he might be a favorite to take home the Critics Choice Award for Best Actor this coming weekend. I would love to see Rami take to the red carpet ahead of the show wearing this navy and white English pinstripe Alexander McQueen suit which features a single-breasted wool silk tailored jacket detailed with navy floral embroidery and matching pants. The suit is very classic itself, but the floral embroidery adds just a little detail that I feel like Freddie Mercury would have approved of. A sleek white button up worn all the way buttoned sans tie and a pair of two tone blue Berluti ‘Profondo’ oxfords would add perfect finishing touches to this ensemble for Rami. 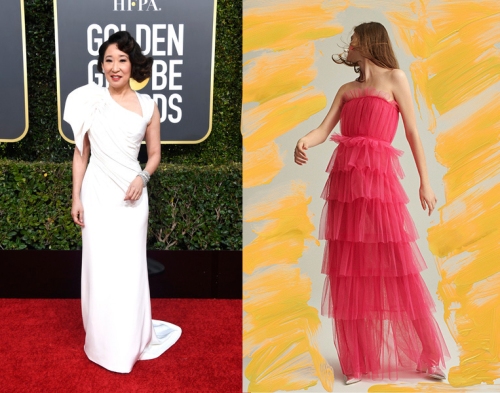 Last but not least is the gorgeous Sandra Oh who really wowed me with her three different gowns at the Golden Globe Awards on Sunday. Everything she wore while hosting, and winning, at the Globes perfectly suited her and there wasn’t a seam out of place on any of them. I want to see that glamour continue this Sunday at the Critics Choice Awards where she is nominated for Best Actress in a Drama Series. I decided to pick a bold color and flirty feminine moment for Sandra to wear this coming Sunday with this hot pink Carolina Herrera Pre-Fall 2019 tulle gown which features a ruffled tiered skirt, a strapless silhouette and gathering along the bust. This flirty and feminine gown is in contrast to the much sleeker Atelier Versace and Stella McCartney gowns that Sandra wore for the Globes, but I think it would be an absolutely beautiful moment. A romantic updo, defined eyes, soft pink lips, and a pair of matching pink and PVC Sophia Webster ‘Rosalind’ gem studded sandals would all allow the gown to be the focus of this really chic moment.