Golden Globe Awards presenters are slowly being announced. Before I even started thinking about who will present I had already edited a bunch of wishes for the stars of films and shows that earned nominated but didn’t earn individual acting nominations. Typically we see stars of shows and movies invited to attend the Golden Globes even if they aren’t nominated or don’t present. The projects nominated this year are so full of style stars that I wanted to feature as many wishes as I could for each of the stars to bring to life.

Dakota Fanning didn’t present at the 2018 Emmy Awards, but she was still on the red carpet (wearing Dior Couture no less) to support her TNT limited series The Alienist. The show is nominated for Best Miniseries or Television film at this years Golden Globe Awards so I wanted to make sure that I put out a wish for her to wear on the red carpet if she steps out to support the show on the red carpet. I decided to go down the custom route for Dakota opting for this blush pink custom Prada chiffon gown which featured a draped bodice, deep v-neckline, a crystal jeweled waist, and a flowing a-line skirt with a sweeping train. I love a great moment from Dakota in either Miu Miu or Prada and I think that this soft, feminine, and romantic gown would be an absolutely beautiful moment on this red carpet especially if paired with a romantic updo, defined eyes, soft pink lips, simple silver Prada sandals, and a pair of vintage Cartier diamond and jade art deco drop earrings.

Hailee Steinfeld stars in the Best Animated Feature Film nominated Spider-Man: Into The Spider-Verse and I really would love to see her bring her sexy, dramatic glamour to the Golden Globe Awards red carpet. They love Hailee over at the Hollywood Foreign Press Association so it wouldn’t surprise me if she is named as one of the presenters in the coming hours and days. I want to see Hailee deliver a very glamorous femme fatale moment on this red carpet wearing this black tulle and silk velvet Ralph & Russo Fall 2018 Couture strapless column gown which features a plunging strapless sweetheart neckline and organza frill, embellished with lacquered ribbon and micro-beading. This gown gives a modern take on 40’s femme fatale style and I definitely think that Hailee would absolutely shut down the red carpet wearing this creation. Add a sleek high ponytail, smokey eyes, bold red lips, black Christian Louboutin ‘Nosy Strass’ PVC detail pointed toe pumps, and Fernando Jorge jewels including ‘Fusion Arrow’ long diamond & clear topaz earrings and a ‘Fusion Cross’ diamond & clear topaz cocktail ring and I know that Hailee will deliver a major moment. 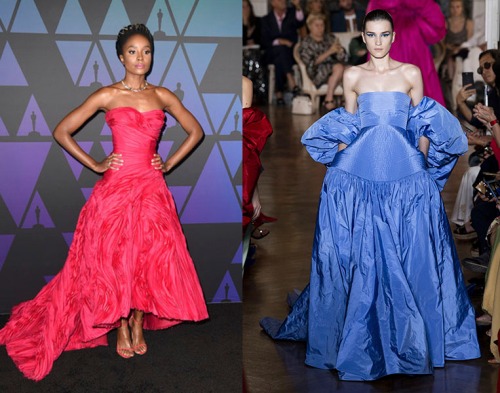 I knew exactly what I wanted to see If Beale Street Could Talk Star Kiki Layne bring to life on the Golden Globe Awards red carpet as soon as I saw that the show was nominated. She might not be nominated, but I am sure that she is going to win the red carpet game. I have been taking note of Kiki and her style since the tour for this film kicked off at the 2018 Toronto International Film Festival. She has been quickly upping her game. She got her footing very quickly. She may not be nominated, and she might not even get to present, but I want to see Kiki take to this red carpet on Sunday night wearing this periwinkle blue silk taffeta Valentino Fall 2018 Couture strapless ballgown which features a matching bubble sleeve bolero. This is definitely a tricky look to wear. We have so far only see Beyonce and Tracee Ellis Ross attempt to bring the bold taffeta gowns to life off the runway, but I definitely think that Kiki has the elegance to really make this gown come to life on this red carpet. A pair of gold Sophia Webster ‘Chiara’ butterfly heel sandals, a sleek high bun, defined eyes, bold pink lips, and a statement Ruwaya ‘Palm Tree’ pink sapphire and diamond necklace would all ensure that this is the most major moment that Kiki has yet to wear on a red carpet.

Lucy Boynton is part of the cast of Bohemian Rahpsody and I would expect that since she has attended other events including the Academy Governors Awards that we will see her supporting the Best Motion Picture – Drama nominated film on Sunday night at the Golden Globe Awards. I honestly had no idea who Lucy was heading into this tour except for the fact that she had made a couple of front row appearances at Miu Miu and Valentino shows with her co-star Rami Malek. I still haven’t quite figured out what her style is, but I decided I wanted to see the American born English actress bring a chic British label to this red carpet. We don’t really see a while lot of Roland Mouret on the red carpet anymore and it is a shame when he is creating gowns like this silver, emerald, and blush ‘Lucia’ strapless shimmer silk nylon color blocked gown which features an origami folded asymmetrical neckline and an a-line skirt. The gown isn’t the first thing I would think of for the Golden Globe Awards, but as Lucy would just be attending as a guest of the film that is nominated I do think it would make sense. I would add an emerald green Judith Leiber Couture faceted box clutch, a sleek bob, thick defined eyes, red lips, a pair of silver Aquazzura ‘Shine’ crystal embellished PVC t-strap sandals, and a pair of David Morris diamond and emerald teardrop earrings to really ensure that this look is nothing but modern glamour defined.

Lupita Nyong’o will be one of the many presenters on Sunday night. The Hollywood Foreign Press Association tweeted it out late last night. I already had a gown picked for her under the assumption that even if she wasn’t announced as a presenter that Lupita would be on the red carpet to support her Best Motion Picture – Drama nominated film Black Panther. I went for a really dramatic look for someone who would just be a guest so I am glad that it is confirmed that she will be a presenter on Sunday night. When I was dreaming up what I wanted to see from Lupita I found a strapless vintage Gianni Versace Couture gown on 1stDibs. Since Donatella has been really looking at her brothers archives for her recent collections I thought that it would be cool to see her re-issue this canary yellow gown from Fall 1995, but in a new and more dramatic manner. The beading on the archive gown does seem very dated and I definitely think that Donatella, and the team inside the Versace atelier, could dream up a way to enhance that. I also would add a really dramatic train that fans out from inside the pleated mermaid hem of the gown. Lupita loves color and I definitely think that she would be able to sell this bold modern vintage moment to me on this red carpet. I took a risk in the jewels I wanted to pair with this gown. I was searching for a pair of yellow diamond chandelier earrings when I found the perfect pair, but the come from Graff. The brand doesn’t really loan out for red carpets. In fact Angelina Jolie was the first star to be loaned jewels from the brand last year. I do however wish that they would consider sending these stunning white and yellow diamond waterfall chandelier earrings for Lupita to wear with this gown. I would also love to see Lupita go back to her buzzed hairstyle. Not many people can really make me love a look like that, but she definitely was able to do it. Add defined eyes, red glossy lips, and a pair of gold Aquazzura ‘Studio’ sequined sandals and I know that Lupita would definitely prove to me once again why I have loved her since the beginning.

I would have put Rami Malek a little earlier in my wishes, but for some reason I forgot to pull his picture when I was planning my wishes for nominees first. He is nominated for Best Actor in a Motion Picture – Drama for his role as Freddie Mercury in Bohemian Rhapsody. I have always been a fan of Rami’s style and I am very excited to see what a full film awards season run from him will look like. For the Golden Globe Awards on Sunday I would love to see him wearing this dark bronze silk jacquard Saint Laurent Spring 2019 Menswear tuxedo jacket paired with a black button up worn sans tie and skinny pack tuxedo trousers. This would be a really cool look for Rami to wear on a red carpet like this, especially because I think that he has a real shot at taking home this trophy. Most male winners will play it safe opting for a classic black and white tuxedo, but I think Rami would be one to push those norm expectations to the side and explore his fashionable side. Just simple black patent leather boots would add the perfect finishing touch to this look.