Happy New Year everyone! I hope that the year is full of glamour, sparkle, and amazing moments! We are not skipping any beats this year and continuing on with my wishes for the 2019 Golden Globe Awards. This year just may be the most glamorous year on the Globes red carpet ever. I am excited to see what all the nominees, presenters, plus ones, and supporters of their films and shows will deliver on this red carpet. 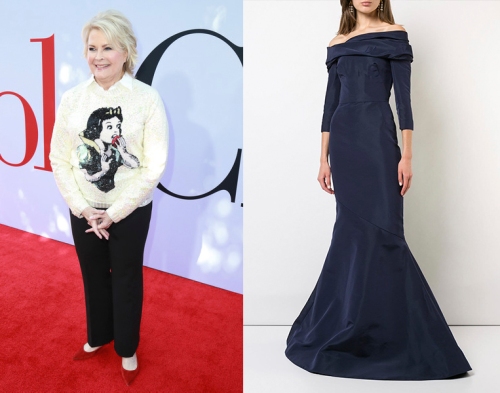 The reboot of Murphy Brown has earned Candice Bergen her first Golden Globe nomination for the series since 1996. She has earned a nomination for Best Performance by an Actress in a Television Series – Musical or Comedy and I will be very interested in seeing what Candice will wear on the red carpet. I decided to go so simple classic glamour opting or a navy silk Oscar de la Renta off the shoulder draped neck gown which three-quarter length sleeves, a fitted waist, a bias cut finish, a flared skirt, a long length and slit details at the wrists. Honestly as I write this I really do think that Candice is more likely to wear some sort of pantsuit in this look instead of a gown, but I think that this chic classic gown is perfect for her. I would call in one of the two classic American labels, either Oscar or Carolina Herrera for her to wear on this red carpet. I want something chic and elegant. This gown paired with her signature blonde hairstyle, defined eyes, red lips, a navy Judith Leiber Couture ‘Siam Soho’ satin box clutch, a pair of navy Paul Andrew sling back pointed toe pumps, and simple (yet statement) Fred Leighton diamond and aquamarine ‘Dart’ drop earrings would be an incredibly chic moment for Candice to deliver on this red carpet. 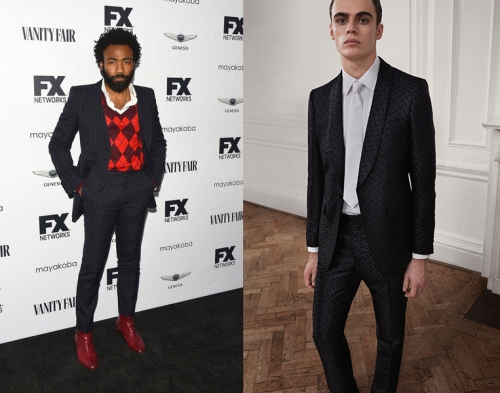 Donald Glover is back as a Golden Globe Award nominee this year for his hit series Atlanta. I always look excited to see what he will bring to the red carpet since he always likes to push the boundaries of fashion. I would have typically been looking at Dolce & Gabbana for Donald, but since the brand has been canceled on this website (and hopefully the red carpets) following the racial rant which lead to the shut down of the brands show in Shanghai, I decided I was going to branch out what I typically think of when it comes to his red carpet moments. I have been loving what Riccardo Tisci has done at Burberry since he took over the reigns of the brand back in September. He delivered some really chic evening suits in the Burberry Pre-Fall 2019 collection and I think that this black silk shawl lapel tuxedo which is rendered in the new ‘Thomas Burberry’ pattern jacquard would be a perfect look for Donald to bring this look to life on this red carpet. I think a white tuxedo shirt, black bow tie, and a pair of black Burberry stud embellished oxfords would all make this a very chic boundary pushing menswear moment on this red carpet.

I tried watching Julia Roberts new Amazon Prime Video series Homecoming, but I was not thrilled with it. It wasn’t bad. Just not my cut of tea. I am however excited that Julia is nominated for Best Performance by an Actress in a Television Series – Drama. She was serving looks this fall while promoting her film Ben Is Back and it has me getting very excited about what is to come. I would love to see Julia bring a very chic and glamorous moment on the Golden Globe Awards red carpet with this white Ralph & Russo Fall 2018 Couture silk crêpe and double satin tailored gown which features an asymmetric panel construction, long sleeves, a thigh-high slit, and jeweled crystal button embellishments. This is something I totally think that Julia would rock in one of her Lancome commercials and I have always wanted to see her bring that same glamour to the red carpet. This glamorous white gown paired with old Hollywood waves worn over one shoulder, defined eyes, red lips, a white Judith Leiber Couture faceted box clutch, white Jimmy Choo ‘Kenny’ satin crystal embellished sandals, and a pair of chic Djula ‘Cascade’ diamond cluster earrings would be one of my favorite looks that Julia has ever worn on a red carpet.

Melissa McCarthy is one who I have been having a hard time shopping for red carpet looks for this awards season. She is gearing up for a major awards season run and I am praying that Melissa will deliver so many major moments on the red carpet. A few custom gowns from designers like Brandon Maxwell or Michael Kors will make me get really excited for what is to come. I did go shopping on the runways and lookbooks to find a chic moment for Melissa to wear on this red carpet. I just haven’t really loved anything. I did find this navy Theia cape sleeve mermaid gown which features beaded detail on the shoulders and a v-neckline. It is very glamorous and chic and I definitely think it is something that Melissa would wear on the red carpet. It would look beautiful on Melissa especially when paired with a romantic updo, defined eyes, red lips, a navy Judith Leiber Couture ‘Slim Slide’ clutch, simple navy Stella McCartney pointed toe pumps, and a selection of Hueb ‘Luminous’ collections diamond and blue tanzanite jewels including a pair of pendant drop earrings and a matching cocktail ring.

Penelope Cruz didn’t win an Emmy for her performance in The Assassination of Gianni Versace: American Crime Story but I wouldn’t count her out as someone who could take home the Globe in the Best Supporting Performance in a Series, Miniseries or Television Film category. She does have some stiff competition though from literally everyone else in the category. While I would love to see Penelope rock a gorgeous custom Atelier Versace gown on this red carpet I would bet that since she is a face of Chanel that she will turn to the French couture house for her red carpet moment. I looked at all of the runways since 2000 to find the perfect gown but there wasn’t one that I think would be perfect straight off the runway. Instead I turned to a navy and black Chanel Fall 2009 Couture strapless cocktail dress which featured intricate floral embroidery and a train on the runway and had it turned into a floor length gown for Penelope to wear on the Golden Globe Awards red carpet. Is this a boundary pushing moment? No, but it does deliver the glamour of Chanel perfectly. A black Chanel glitter acrylic clutch, black lace Christian Louboutin ‘Follies Lace’ pumps, a sleek updo, navy smokey eyes, red lips, and a selection of Atelier Swarovski jewels including ‘Lola’ white topaz and diamond drop earrings, a ‘Azure Blue’ sapphire, ice blue topaz, and diamond cocktail ring, and a ‘Lola’ white topaz and diamond open cocktail ring would all ensure this look is absolute glamour defined from head to toe.

Rounding out the list is a very bold menswear moment for Timothee Chalamet to deliver on this red carpet. Timmy is nominated for Best Performance by a Supporting Actor in a Motion Picture for his role in Beautiful Boy and is my favorite to win. He really pushed the boundaries of menswear on the red carpet over the course of the fall and I am really excited to see what he is cooking up for awards season. He doesn’t work with a stylist so you really know that his style is his own. I wanted a bold moment and it was an easy choice for me to pick this silver holographic Dior Men Pre-Fall 2019 printed asymmetrical double breasted single button blazer paired with a black t-shirt and black tuxedo pants for Timothee to rock. I really don’t know any other dude who could make this look work, but Timmy would rock it with ease.