Kicking off this list is Outlander star Caitriona Balfe whom is nominated for Best Performance by an Actress in a Television Series – Drama, for her performance in the show. I know Caitriona has the potential to deliver some really major moments. I loved the tea length Chanel Couture gown she wore for the 2018 Globes red carpet. Since then she has swapped her stylists and is now working with the 2018 Stylist of the Year Karla Welch. They haven’t had a major high profile red carpet together yet, so I am really excited to see what the two are cooking up for the Golden Globe Awards red carpet. While there are numerous current season couture, and non couture options, that I think are perfect for Caitriona to bring to life on this red carpet I decided to go into the archive and opt for this rose pink Giambattista Valli Fall 2017 Couture one shoulder draped goddess gown which features a 3-D floral cape and a flowing train for her. I have been in love with this gown since it first came down the runway in July of 2017 and I am shocked that it hasn’t been worn yet. It does need a tall statuesque woman to really push through it and I definitely think that Caitriona has what it takes to really work on the red carpet. I think that with a sleek updo, defined eyes, soft pink lips, rose pink glitter Aquazzura strappy stiletto sandals, and a pair of vintage Cartier diamond and pink sapphire floral ear clips that this would be one of Caitriona’s best red carpet looks ever.

Debra Messing knows how to deliver really glamorous moments on the red carpet and I am interested in seeing what she will bring to the red carpet at the 2019 Golden Globe Awards where she is nominated for Best Performance by an Actress in a Television Series – Comedy for her role in Will & Grace. Do I think that Debra will take home the Globe? Probably not, but I do want to see her bring the glam to the red carpet no matter what. She loves herself a Christian Siriano gown and so I decided to go to her favorite designer for the perfect gown for her to wear on the Golden Globe Awards red carpet. Debra has a beautiful hourglass curve to her body and I think it would be accentuated perfectly with this lavender and black Christian Siriano Pre-Fall 2019 bustier mermaid gown which features a straight neckline, fitted at bust, a draped hip detail, and a fluted hem. Typically I wouldn’t pick a gown with padding on the hips for any woman who isn’t a size 0, but Christian knows how to make that draping perfect for any woman. He is the designer for any woman who has curves, no matter what size, that wants to feel glamorous. I definitely think that he would ensure that the proportions of this gown would fit Debra’s frame perfectly. I definitely think that the lavender bodice would compliment Debra’s skin tone and hair color. Adding old Hollywood waves, smokey eyes, soft pink lips, black satin Bottega Veneta ‘Intrecciato’ woven knot clasp clutch, black glitter Stuart Weitzman ‘Nudist’ sandals, and a selection of Fred Leighton necklaces two diamond worn around one amethyst (in the photo it has two amethyst I would leave the top one at the boutique) would ensure that this look is just glamour defined from head to toe.

Glenn Close is another front runner in the Best Performance by an Actress in a Motion Picture – Drama category for her performance in The Wife. I think that it will most likely go to Lady Gaga and her performance in A Star Is Born, but so far the two have shared honors at other awards events. For Sunday’s Golden Globe Awards red carpet I decided on something simple and chic opting for this black jersey Burberry Spring 2019 RTW long sleeve gown which features an asymmetrical cape like draped bodice. I don’t expect Glenn to deliver something incredibly bold on this red carpet, but I definitely think that this chic gown would be perfect for her. I definitely think that between Glenn or Olivia Coleman that this gown is bound to be worn on an awards season red carpet and why not bring it to like on the Golden Globes red carpet. I think that a black satin Judith Leiber Couture tall slender art deco box clutch, simple black Manolo Blahnik classic half d’orsay pointed toe pumps, her chic curled short hair, defined eyes, nude lips, and simple antique Edwardian diamond teardrop earrings from Beladora all would make this a very chic and glamorous moment for Glenn to wear on this red carpet. 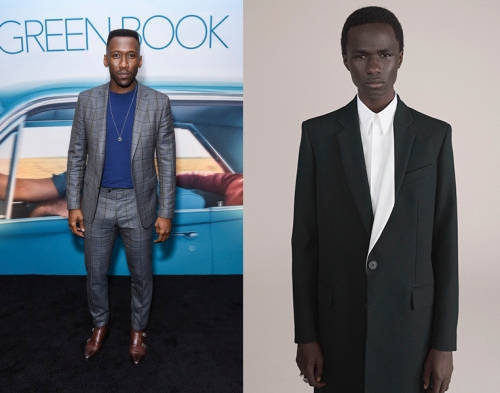 Mahershala Ali is one of the few guys nominated for a Golden Globe Award whom I decided I would feature in my wishes this year. He can bring some really interesting takes on menswear to the red carpet. He usually pushes the boundaries subtly. I decided to keep that the vibe for this years Golden Globes red carpet I want to see the Best Supporting Actor in a Motion Picture nominee to give us crisp elegance on this red carpet wearing this Givenchy Pre-Fall 2019 suit which features a coat like blazer with a color blocked lapel paired with a crisp white button down worn all the way up and sans tie. The little bit of white on the lapel adds just enough visuality to this look for Mahershala. If executed with precision styling I definitely think that this could be a major Best Dressed Menswear moment. His signature flat top, black tuxedo pants, and black patent leather boots all would add those perfect finishing touches to this look.

Patricia Clarkson is nominated for Best Performance by a Supporting Actress in a Series, Miniseries or Television Film for her role in the HBO miniseries Sharp Objects at this years Golden Globe Awards. She has rocked so many age defying looks on the red carpet over the last year and I am really excited to see what she and her stylist Victor Blanco are cooking up for awards season. When Patricia was first nominated for a Golden Globe I commented on Victor’s Instagram post congratulating his client and he responded saying that he already had the dress and that it was couture. It got me excited so I only looked at couture labels when I was looking for the perfect gown for Patricia to wear on the Golden Globe Awards red carpet. I decided to go back to one of my favorite archive Elie Saab gowns, that I am still shocked hasn’t been worn. I fell in love with this navy and gold long sleeve mermaid gown when it first came down the Elie Saab Fall 2014 Couture runway. It is that perfect meshing of glamour and sex appeal via the sheer construction, square neckline, intricate beaded embroidery, fit and flare silhouette, and sweeping train. I have put this gown on many of my red carpet wishes and I am eagerly awaiting the star that finally pulls it out of the archive and onto the red carpet. Her signature waves, defined eyes, red lips, a pair of black and gold Malone Souliers bow detail ankle wrap d’orsay pumps, and simple LeVian aquamarine, white and chocolate diamond teardrop earrings would all ensure this is a very major moment for the actress.

Coming off her Emmy Award win it would seem like Thandie Newton is the favorite to take home the Best Performance by a Supporting Actress in a Series, Miniseries or Television Film trophy for her role in the HBO series Westworld. I have always loved seeing Thandie on the red carpet. In fact the custom Monse gown that she wore for the 2017 Golden Globe Awards made my Best Dressed of 2017 list. I want to see her bring bold glamour to this red carpet yet again opting for this navy blue and yellow silk satin Schiaparelli Fall 2018 Couture gown which features a single sleeve, asymmetrical neckline, column skirt, and layered train. I love Thandie in Schiaparelli and I definitely think that this gown would look absolutely fantastic against Thandie’s skin tone. I would keep the look incredibly glamorous with a sleek updo, smokey eyes, soft antique rose pink lips, yellow Giuseppe Zanotti ‘Sofia’ slingback sandals, and a pair of Dior Haute Jewelry white and yellow diamond pendant drop earrings would all ensure that this is another bold, modern glamorous moment from Thandie.