bg6’fAs I went to schedule this post at 1:45 A.M. last night WordPress decided to tell me the link had expired and deleted everything that I had written. So at 2:00 A.M. I went back to square one found all the links for the pieces I had styled the six looks in this list with and started writing, AGAIN. I’m not salty though. While this post goes live I am probably still sleeping which means I will be able to stay awake to actually ring in the new year. If we weren’t just SIX DAYS away from the 2019 Golden Globe Awards I don’t know if I would have stayed up even later than I had already stayed up and re-written this post. But since we are still on the front end of all my wishes for this years red carpet I knew I needed to power through. So here we go, again more me.

There has been a lot of buzz that this year Amy Adams might ride awards season to the Oscars at the end of awards season on a winning streak. Something inside me says differently. I haven’t seen VICE yet, but I think that honors and nominations say that Regina King might be the lock for that little gold man this year. I do however want to see Amy bring her red carpet a-game over the course of awards season, because she is definitely (from what I’ve read) that this is going to be a two horse race. She will almost definitely win though in the Best Performance by an Actress in a Miniseries or Television Film category for her role in Sharp Objects. I decided that I wanted DRAMA from her on the Globes red carpet this weekend opting for this plum purple Elie Saab Fall 2018 Couture one shoulder gown which features a dramatic ruffled bodice, peplum waist, column skirt, and a long a-line train. I love this color on Amy. It has been a while since we have see her wearing it though. I feel in love with this combination when Amy wore a custom Giambattista Valli gown in the tone for the 2009 SAG Awards. Since then she hasn’t brought us this tone and since it has been 10 years since that moment, still one of my favorites that she has worn before, I thought that this gown and this red carpet would be the perfect formula for her to really bring us a major moment. I love a redhead in purple, much like I do sapphire blue and emerald green, so this just sounds like a match made in heaven especially when styled with matching plum Schutz t-bar strap pointed toe pumps, a sleek updo, smokey eyes, soft pink lips, and a pair of vintage 1920’s Cartier amethyst and white enamel drop earrings. 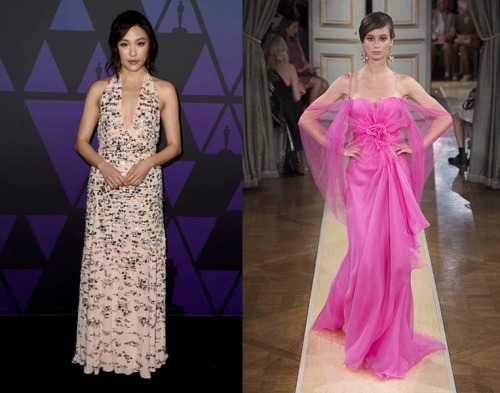 I am wondering if Constance Wu will be able to keep a pace to make the Best Actress in a Motion Picture – Musical/Comedy category a three horse race with Olivia Colman from The Favourite and Emily Blunt from Mary Poppins Returns. I am hoping so because I really want to see Constance shine one the red carpet after being super disappointed with her looks during the promo tour for Crazy Rich Asians, which is the film which earned her this nomination. The looks during that tour didn’t fit and I want perfection from Constance as she gets through awards season. I wanted to kick off the season with a bold moment so I opted to put Constance in this hot pink Armani Prive Fall 2018 Couture strapless gown which features a sweetheart neckline, corseted bodice, rosette detail draped gathered skirt, and sweeping train. I love this gown and I definitely think that Constance could sell it to me. I would ask the team at Armani if they could remove the attached tulle shawl because I do think that would overwhelm Constance’s petite frame. I would style this gown with a loose romantic updo, defined eyes, soft pink lips, a pair of hot pink satin Saint Laurent ‘Tower’ crystal cap toe pumps, and dazzling white and pink diamond Lorraine Schwartz cherry blossom drop earrings to really ensure that Constance has an absolutely major moment on her hands.

I can almost guarantee that Best Supporting Actress in a Motion Picture, for her roll in The Favourite, nominee Emma Stone will walk Sunday’s red carpet wearing some iteration of a Louis Vuitton gown. She is a face of the brand and as I have made it clear in many other posts I feel like LV contracts turn style stars into slaves to the brand. I miss the major moments that Emma brought to the red carpet. She is one of the ladies who has made my Best Dressed of the Year list with a look at the Globes back in 2012 wearing custom Lanvin. I was going to go down the custom gown route for Emma to wear on the Globes red carpet this weekend, but I was on the Louis Vuitton website recently and I found this silver spaghetti strap fully embroidered column gown which features side slits and floral pattern combined with a dégradé of metallic tones and silver bands, whose geometric pattern accentuate the waistline and thought it would be a really chic moment for Emma to bring to life on this red carpet. Is the style of the gown going to compete with the big bold couture creations we are bound to see on this red carpet? No. It doesn’t have a big skirt or a long train (and I wouldn’t expect that from an LV gown either) but I think that if styled right that this could be the best look that Emma has had from LV yet. A sleek vintage inspired updo, black and green smokey eyes, soft pink lips, a silver Louis Vuitton ‘Petite Malle’ box clutch, silver Gianvito Rossi ‘Denise’ strappy PVC detail sandals, and a selection of Cartier ‘Résonances de Cartier’ collection emerald, diamond, and onyx high jewelry including a pair of drop earrings and a statement cocktail ring would all make this one of the best LV looks that Ema has ever worn. 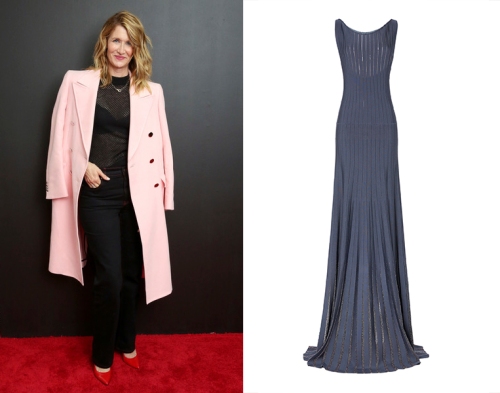 Laura Dern won the Golden Globe for Best Supporting Actress – Television Series, Miniseries, or Television Film, and as nominated again this year but for Best Performance by a Lead Actress in a Miniseries or Television Film for her role in the HBO movie The Tale. I decided to go with more of a sporty glam look for Laura to bring to this red carpet. She has a very athletic frame and I think that this slate blue Zac Posen Pre-Fall 2019 ribbed knit gown which features a rounded neckline, shimmering embroidered stripe pattern, and a full floor length skirt is perfect for her to bring to life on this red carpet. I think it would compliment her frame and while it isn’t as dramatic as the Armani Prive gown she wore last year I think it is the perfect option. She isn’t one of the front runners to actually win, thats Amy Adams and Penelope Cruz, so I think this is Zac Posen moment would be just the right choice especially if paired with old Hollywood waves, defined eyes, dusty rose pink lips, a steel grey Edie Parker ‘Jean’ metallic marbled acrylic clutch, anthracite grey Alexandre Birman bow detail glitter sandals, and jewels from Fred Leighton including girandole diamond pendant earrings, a vintage art deco Tiffany & Co. diamond bracelet (sold from Fred Leighton,) and a new Fred Leighton signed diamond cocktail ring. 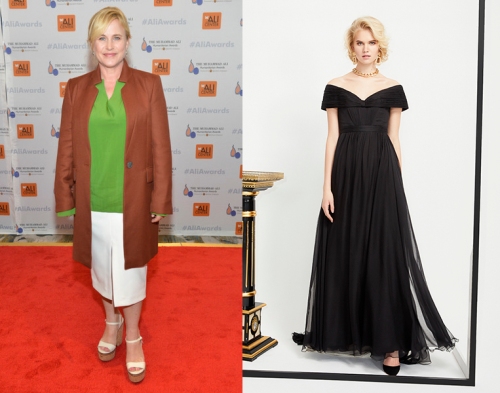 I went back and forth about whether or not I was going to feature Patricia Arquette in this list. She has never been one who excites me on the red carpet. I can’t think of any looks of hers that I’ve liked, let alone loved. I decided ultimately that since Patricia is nominated that I would put something out into the universe for a chic moment for her to wear. I decided that I would go for simple classic glamour with this black Ester Abner Spring 2019 off the shoulder gown which features cap sleeves, sweetheart neckline, empire waist, and a flowing chiffon a-line skirt. Is this going to make any Best Dressed lists? No, but it would keep her off worst dressed lists especially if it was styled with a black Jimmy Choo ‘Trinket’ tube clutch, a sleek low bun, defined eyes, red lips, a pair of black Jimmy Choo ‘Love’ pumps, and some sparkle via a diamond garland collar necklace from Beladora. 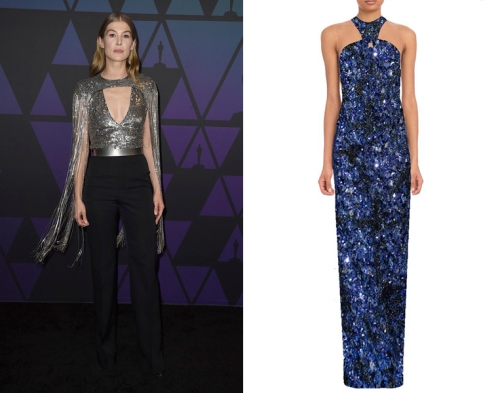 I was a little surprised with the Best Actress in a Motion Picture – Drama nomination that Rosamund Pike received this year. It is such a heavy field year that I thought she was a long shot. I am excited to see what she will wear on the red carpet. She has been a devotee to Givenchy for the last year and I am almost expecting her to don the brand again on Sunday night. While there are many options off the current runways that Rosamund could wear I decided to create a custom couture gown for her instead. I took a bold blue fully embroidered column skirt off a caped gown I loved from the Givenchy Fall 2018 Couture collection and paired it with a halter design from the Spring 2019 RTW collection. I think that the fusing of the two designs created a very modern and glamorous moment that I think is perfect for Rosamund to wear on this red carpet. Pair it with a sleek updo, defined eyes, red lips, a pair of silver Christian Louboutin ‘Follies Lace’ pumps, and Bulgari diamond and sapphire ‘Roaring 80’ ear clips to really make this look head to toe perfection