The press tour for Creed II has already kicked off. I have seen photos of Tessa Thompson ready for interviews, but I have not been able to confirm any dates for premieres. We are currently in a place that with all the major fires in Southern California that red carpets, including premieres at the AFI Fest and the Golden Globes Ambassador party, being canceled. With that will Creed II have a premiere in LA ahead of its theatrical release next Thursday? With nothing confirmed I would be surprised if it does, but I wanted to put out wishes for the cast just in case! 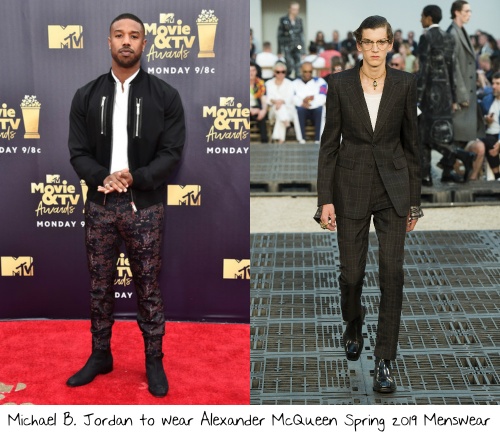 Michael B. Jordan knows how to give a look on the red carpet. He isn’t afraid to bring pattern or color to the red carpet. I decided though to go for major tailoring from Alexander McQueen Spring 2019 Menswear dark brown plaid check two button suit for him to wear on this red carpet. I think that the cut and the subtle print and color is something that makes such a major menswear moment. I feel like Michael would really be able to sell this look to me, but I think he would style it a little more classically. With a classic white button down shirt, a paisley Alexander McQueen tie, and the runways shinny black oxfords I really do think that Michael would have another really chic menswear moment on this red carpet.

It was following the awards season run for Selma during the promo tour for the first Creed film that Tessa Thompson really started becoming a fashion star. I would say that it was the Marc Jacobs gown which she wore for the London premiere of Creed was the moment she really cemented herself as a rising style star. She has done nothing but deliver glamour, in many different facets, to the red carpets ever since. For the LA premiere of Creed II, if it happens, I want to see Tessa give more of a bohemian glamour moment on the red carpet wearing this strapless dark ombre velvet Ralph Lauren Fall 2018 RTW gown which features a patchwork bodice and hem, an a-line skirt, and a chic train. I didn’t know what I wanted to see Tessa wear on this red carpet as I went through my archive of runway and lookbook photos for this red carpet, but when I saw this gown I thought it was the perfect moment for her. I would style this look with a long half up half down braided hairstyle, defined eyes, burgundy lips, a pair of gold Aquazzura ‘Aqua Moonlight’ strappy platform sandals, and Irene Neuwirth green tourmaline and diamond starburst drop earrings to really make this an absolutely major moment on the red carpet at this premiere.

The date for the LA premiere of Creed II is still to be confirmed.