Sunday is another unofficial kick off to awards season the 2018 Academy of Motion Pictures Arts & Sciences annual Governors Awards. Every November the Academy hands out its honorary awards and this year it will be awarding Honorary Oscars to publicist Marvin Levy, composer Lalo Schifrin, and actress Cicely Tyson as well as the The Irving G. Thalberg Memorial Award will go to producers Kathleen Kennedy and Frank Marshal. Aside from the honorees I never know who is going to be on the red carpet at this event, which is usually highly star studded. Last years guests included Margot Robbie, Saoirse Ronan, Mary J. Blige, Greta Gerwig, and Alison Janney (all of whom went on to be nominated for an Oscar this year) as well as the likes of Jennifer Lawrence, Jessica Chastain, Angelina Jolie, and Diane Kruger. So when I put this list together I went through some of the websites that are predicting Golden Globe and Oscar nominations and picked just a few names who I would really love to see on this red carpet. 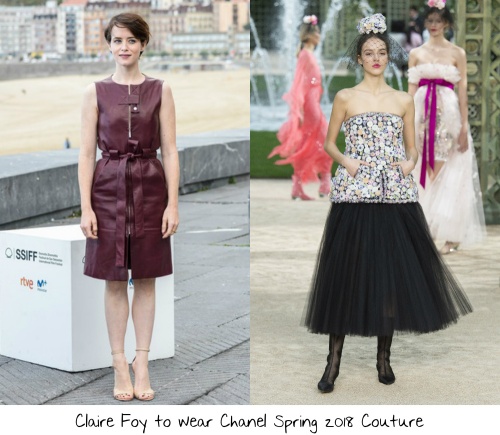 Claire Foy is one of the front runners right now for an Oscar nomination for her supporting role in First Man. I have always been very up and down with Claire’s style and I am hoping that she will be on top form if she does go with an Oscar run. Kicking that run off in couture is perfect. She tends to like very column silhouette gowns or tea length styles and for this red carpet, which is a formal dress code but not quite as glam as the actual Oscars red carpet, I decided to go with the latter. I was searching for the perfect gown for Claire and the moment I saw this tea length Chanel Spring 2018 Couture strapless gown which features a pastel floral embellished drop waist bodice (WITH POCKETS) and a black tulle a-line skirt. It is that very glamorous and feminine moment that I really this is perfect for Claire to wear on this red carpet. I honestly wouldn’t do too much to much to this look adding a sleek wave hairstyle, simple lined eyes, soft pink lips, and a pair of black Prada slingback strappy sandals to really make this a perfect moment for Claire. 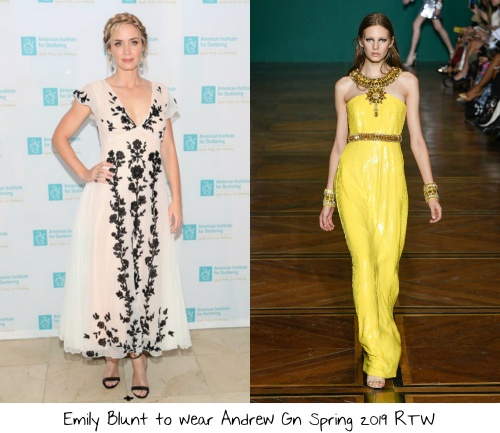 Putting Emily Blunt on this list was a bit of just a want of the heart. One of my favorite looks Emily has ever worn has been on the Governors Awards red carpet back in 2014 when she rocked a custom hot pink Michael Kors gown which was the perfect meshing of modernity and femininity. I feel like with her big holiday blockbuster release of Mary Poppins Returns coming up next month that she could be on this red carpet just to keep up appearances. It isn’t very often that Emily wears yellow on the red carpet but I didn’t even need to think twice about picking this yellow sequin Andrew Gn Spring 2019 RTW silk-blend gown which features a column silhouette with contrast embellishment detail along the halter neckline and waistline for her to wear on this red carpet. I wasn’t on a hunt as soon as I decided I wanted to put Emily on this list I knew I wanted to use this gown. It is bright, feminine, glamorous, and cheerful. I really do believe that she would make it a major moment on this red carpet especially if she paired it with a matching yellow velvet Tyler Ellis ‘Perry’ clutch, romantic updo, defined eyes, punchy pink lips, and a pair of yellow crystal embellished Gianvito Rossi sandals. 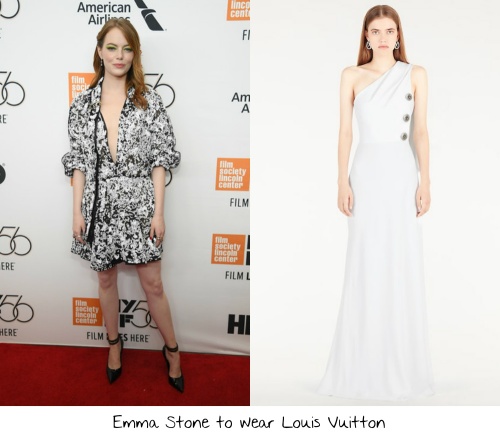 Emma Stone is also a favorite to be a nominee at this years Academy Awards for her performance in The Favourite. I have long been a huge fan of Emma on the red carpet, but since she signed her Louis Vuitton ambassador contract about a year ago I have been less than impressed with her red carpet moments (except for when she wears Givenchy.) Anything will be an improvement over the custom Louis Vuitton gown she wore for the Governors Awards last year that was basically a casual dress on the runway that they last minute attached some fabric to the original hem to turn into a gown. I was on the Louis Vuitton website the other day looking for inspiration for custom gowns when I actually saw this white one shoulder gown which features elegant draping and crystal embellished button details and thought it would be absolutely gorgeous on Emma. It is a white gown (like last year) but I really think that this would be an absolutely amazing moment for her to bring to this red carpet. It has the potential to be the best thing from Louis Vuitton that Emma has ever worn. A dark emerald green smokey eye, red lips, a loose romantic updo, silver Judith Leiber ‘Slim Slide’ crystal embellished clutch, a pair of silver Gianvito Rossi ‘G String’ leather & PVC sandals, and Harry Winston diamond cluster earrings all would add the perfect finishing touches to this ensemble for Emma to really bring the glam to this red carpet. 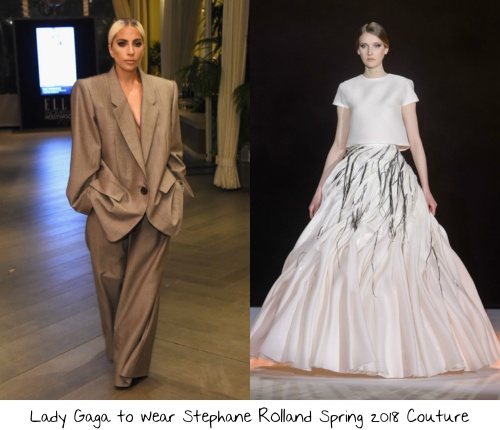 Lady Gaga is still my favorite to take home the Best Actress award at the 2019 Academy Awards for her performance in A Star Is Born. I also think she is a solid lock to take home the Best Original Song trophy as well and so I really want to see her on the red carpet at the Governors Awards on Sunday night. I believe that out of anyone who is on this list that Gaga would be the most likely to bring the glamorous drama to this red carpet. I was searching for the perfect gown and looking through couture collection after couture collection and was not thrilled with anything, that is until I saw this white Stephane Rolland Spring 2018 Couture ball gown which is actually separates include a cap sleeve silk t-shirt style blouse and a crinoline skirt in ivory braided gazar embroidered with silver chains. It is that dramatic and modern take on glamour that I come to expect from Gaga and I really do believe that she would would make it a major moment on this red carpet. A sleek bouffant updo, thick winged eyes, red lips, a pair of (customized) white Charlotte Olympia ‘Eugenie’ crystal heel sandals, and Anita Ko ‘Ava’ diamond wreath earrings would add the perfect compliments to this gown ensuring that Gaga will deliver yet another Best Dressed of the Year worthy look. 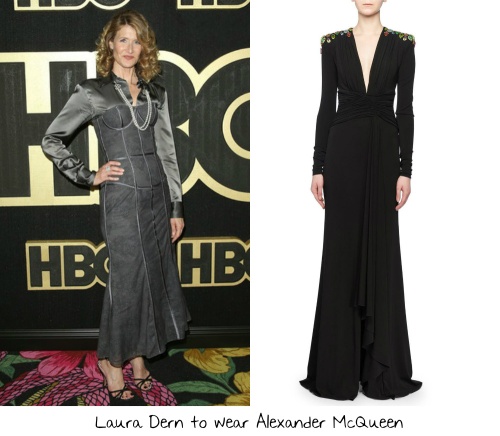 Laura Dern is actually one of the representatives from the actors branch of the Academy to the board of governors, so it would surprise me if she isn’t on this red carpet on Sunday night. She doesn’t have a film project that think will make the Oscars cut next year, but I think her being one of the governors is enough to get her on this red carpet. I went for a classic Alexander McQueen black draped jersey long sleeve gown which is brought into the current season with the addition of the crystal beetles that embellished the shoulders for Laura to bring to this red carpet. This gown isn’t anything we haven’t seen before, but I definitely think that it is the perfect look for Laura. She tried to go for fashion in Thom Browne at the Emmy Awards and it just failed, so why not go back to classic, sexy glamour for this upcoming red carpet. I would add a matching black Alexander McQueen beetle embellished clutch, old Hollywood waves, defined eyes, red lips, and a pair of black and gold Christian Louboutin ‘Cosmo’ patent leather and vinyl pointed toe pumps to really ensure that this a perfect moment for Laura.

Before I even felt like Widows was a real contender in this years Oscars race I started to think that Viola Davis could be on this red carpet. She very well could step out to present Cicely Tyson with her honorary Oscar. Cicely plays Viola’s characters mother in How To Get Away With Murder and the two are reportedly very close. I haven’t been blown away with anything that Viola has worn in a while and I am hoping that as awards season nears that she will be more on top of her game, especially since she is a contender for an Oscar nomination for her performance in Widows. What better place than an Academy event red carpet to really get back on track. Basically every red carpet look that Clare Waight Keller has designed this year has been a major success so I decided to share some of that magic with Viola picking this navy Givenchy Spring 2018 Couture one shoulder gown which features a tiered asymmetrical pleated skirt trimmed with multi tone aqua ribbons. I have loved this gown since it was first presented back in January but I haven’t had a right person right event to feature it in a wish list. It might be a stretch to wish for Viola to wear this gown (she doesn’t wear a whole lot of couture) but I really do think that in this gown with a sleek updo, defined eyes, red lips, a navy Judith Leiber Couture ‘Soho’ satin clutch, navy Gianvito Rossi suede cutout d’orsay sandals, and a pair of Irene Neuwirth ‘Pandora’ tanzanite drop earrings that Viola would be back to her best.

The 2018 Academy Governors Awards will take place this weekend on Sunday November 18, 2018.