Amandla Stenberg will be honored with the Hollywood Breakout Performance Actress Award for her performance in The Hate U Give. This is not Amandla’s first role, by any means, but it is her first critically claimed leading role. I have heard amazing things about this movie, and I believe that she is a dark horse contender for awards season. When it comes to her style with the beginning of this tour (which kicked off at the Toronto International Film Festival) Amandla started working with power stylist Karla Welch. I always believe that Karla works magic and I believe that she really gets Amandla and the two make high fashion magic together. For this red carpet I feel like the two will go for bold glamour, but in a more simplistic style which is why I turned to this dusk color tone ombre Cushnie Resort 2019 ‘Evangeline’ slip style velvet gown which features an asymmetrical cowl neck and a fitted silhouette. This gown is a little sexier than what we are used to seeing from Amandla on the red carpet, but I really do believe that this is the perfect moment for Amandla to have a more “grown up” moment on a red carpet. A chic braided updo, smokey eyes, glossy nude lips, dark bronze Jimmy Choo ‘Emily’ glitter sandals, and a pair of Maxior ‘Iris’ citrine, diamond, and garnet ear cuffs all would make this a beautiful moment on the Hollywood Film Awards red carpet.

This years Hollywood Actress Award will go to the iconic Glenn Close for her performance in The Wife. While this film did not screen at any of the major film festivals, like most major awards contenders do, I wouldn’t count it out as a silent horse for a major awards season run (a la her nominations for Albert Nobbs.) IndieWire has Glenn’s performance in The Wife as a front-runner for a Best Actress Oscar nomination. So I really want to see Glenn bring her A-game to the red carpet as award season kicks off. While she hasn’t worn a Zac Posen gown in a while it is the brand that I most closely identify with Glenn’s red carpet aesthetic. So it was no shock to me that when I was looking for the perfect look for Glenn it Zac that I thought of. I go back and forth on whether or not Glenn would wear a gown for this red carpet or if she would go more for a suit or cocktail dress. I always feel like a gown is a good idea and so when I saw this African violet Zac Posen gown which features an off the shoulder neckline with contrast tulle trim at décolletage, long sleeves, trumpet silhouette, and a sweeping train and I knew it was going to be the perfect moment for her to bring to life on this red carpet especially when paired with a chic curly hairstyle, defined eyes, soft dark antique rose pink lips, and a pair of black Christian Louboutin ‘Uptown’ pumps. 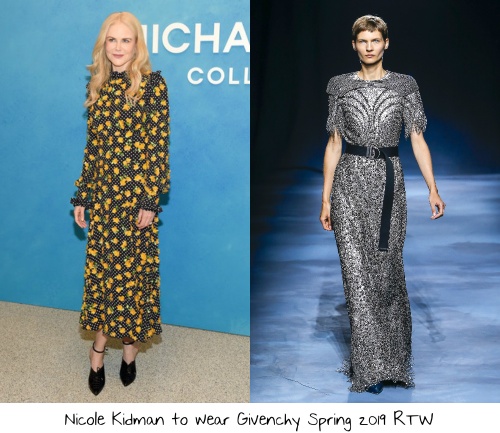 Everyone knows I love a great Nicole Kidman red carpet moment so I am really excited to see what she will bring to the red carpet at the 2018 Hollywood Film Awards where she is going to be honored with the Hollywood Career Achievement Award. She is being celebrated for her incredibly diverse resume of films and I wanted to pick a gown that really fit the glamour of her entire career. It was no question when I was thinking about what I wanted to see Nicole wearing for this red carpet. When I watched the Givenchy Spring 2019 RTW livestream (comfy in my pajamas from my couch) and saw this gunmetal grey fully beaded gown which features strong shoulders, cap sleeves, and a column skirt Nicole was the first (and only) person that I have pictured wearing this gown on the red carpet and so I thought that this would be the perfect place for her to really ensure that this gown gives me the major moment I am so desperately craving. It could be a Best Dressed of the Year worthy moment. The gown itself is such a statement that I wouldn’t go too crazy with styling. In fact I would remove the black D-ring belt the gown was paired with on the runway adding a romantic updo, defined eyes, red lips, a pair of black Gianvito Rossi suede pumps with a tie wrap ankle strap and feather details, and Fred Leighton art deco diamond drop earrings.

Rachel Weisz just returned to the red carpet for the first time since giving birth at the London Film Festival premiere of The Favourite. Rachel missed both the Venice Film Festival and New York Film Festival premieres of the film, but with being a major contender from the cast for awards season love I am not surprised to see her on the promo trail again so soon since giving birth to her second child. Will she make the jaunt from the UK to LA for the Hollywood Film Awards? Since she is being honored with the Hollywood Supporting Actress Award for her role as Sarah Churchill, Duchess of Marlborough in The Favourite I am hoping so. I did like her Alexander McQueen midi gown which she wore for the films premiere at the London Film Festival I want to see more glamour on this awards show red carpet. I decided to really go for it by opting to pick haute couture for her to wear for this red carpet. We don’t often see couture on this red carpet, but I think that since Rachel is a good friend of Chanel that this black one shoulder Chanel Fall 2018 Couture gown which features intricate beaded trimming is the perfect option for her to bring to life on this red carpet. Rachel does classic glamour so well and as she regains her footing postpartum I think that this is exactly the perfect option for her to bring to life. A black satin Chanel clutch, a pair of black Gianvito Rossi patent leather d’orsay sandals, a sleek updo, defined eyes, red lips, and Bulgari High Jewelry ‘Roaring 80’s’ diamond and onyx drop earrings all would add the perfect finishing touches to this ensemble. 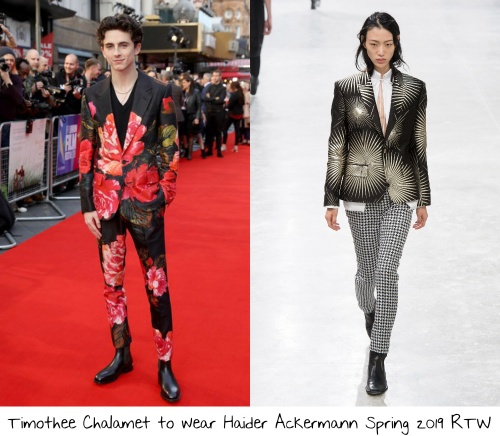 Finishing out this list is Hollywood Supporting Actor honoree Timothee Chalamet. I have been LOVING pretty much everything that Timothee has worn on the red carpet recently from the likes of Haider Ackermann, Alexander McQueen, and Louis Vuitton by Virgil Abloh. He takes risks and the end up working out for him. His style MO recently has been more about bold suits paired with t-shirts. It works because of the swagger (which isn’t exactly the right term but I couldn’t find the exact right one) that he possesses on the red carpet. He brings effortlessness to difficult to wear looks making them work with ease. I went back to his good friend Haider Ackermann for the look I want to see Timmy wear on this red carpet Sunday night. He can be very gender fluid with his style Haider Ackermann defines that. So when I looked at the Spring 2019 RTW collection (which featured both menswear and womenswear) it wasn’t much of a stretch for me to pick this black and gold abstract thistle print blazer for Timothee to wear on this red carpet. I would imagine that Haider would custom make a suit fit to Timothee’s measurements perfectly. I would have Haider make a pair of pants to match the jacket as well. A simple black crew neck t-shirt and black leather boots all would really make this look bold and effortless perfection.