When it comes to movie premieres Disney knows how to go all out for its major blockbuster films. I am really excited to see what everyone in the cast of The Nutcracker and the Four Realms will bring to the red carpets as they promote the film. I haven’t officially confirmed that there will be a premiere of this film in London, but I have heard that it is likely that it will have a red carpet premiere in LA on Monday. 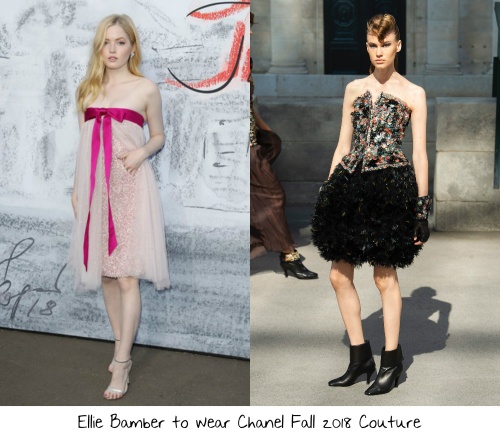 There are actually three ladies in cast of The Nutcracker and the Four Realms that are Chanel girls, but in this set of wishes I only have one of them in a Chanel dress for the red carpet. Ellie Bamber almost always wears Chanel on the red carpet and I’m not really expecting anything different from her has she goes out and promotes this film on the red carpet. While I would typically pick a gown for this kind of movie premiere for everyone in the cast I think that this Chanel Fall 2018 Couture cocktail dress which features a structured orange, green, and black structured sequin bustier bodice and a bell shaped feather detailed skirt is definitely able to hang with the other looks I’ve picked for the cast to rock on this red carpet. I think that it fit’s Ellie’s very strong and glamorous style and I definitely think that if any of the current Chanel ambassadors could really sell this look to me on a red carpet it would be Ellie. The dress itself is such a statement that I would just pair it with a romantic updo, defined eyes, nude lips, and a pair of black Chanel ‘Grosgrain’ wedge sandals to really ensure head to toe perfection.

I always get excited when I see that Helen Mirren is part of a cast. She has incredible style that always looks modern and glamorous. When she steps out for the LA premiere of The Nutcracker and the Four Realms I really want to see Helen deliver some real glamour on the red carpet. She tends to favor certain brands on the red carpet and recently that has been Valentino. So it was a pretty easy decision to pick this gorgeous champagne Valentino Spring 2018 Couture long sleeve gown which features ruffled details, intricate beading, and a raspberry pink silk waistband. This gown is definitely more ‘matronly’ than we are used to seeing Helen bring to the red carpet, but I definitely think that given the air of the film that it just would fir perfectly. Her signature short pixie, defined eyes, nude lips, a custom Valentino satin clutch to match the waistband, and a pair of beige Manolo Blahnik lace embellished pumps would add the perfect finishing touches to this very glamorous ensemble.

Keira Knightley is the cast member we all would expect to wear Chanel for this premiere, but to be honest I wanted to see her branch out a bit from the brand for this red carpet. She has been stepping out here and there with looks from Erdem, Prada, and Bora Asku recently so when I was thinking about what I wanted her to wear during this promo tour I decided I didn’t want it to be all Chanel (don’t worry I have a major Chanel moment planned for my wish for her to wear for the films premiere in London) so I started to think of other brands I wanted to see her wearing. I have been obsessed with the Richard Quinn Spring 2019 RTW collection since I first saw the pictures and I really want to see it embraced on the red carpet. While most of it was very out there, too out there for Keira’s style typically, there were a few options I could easily see her being drawn to. This ice white sleeveless flapper inspired dress which features intricate beaded embroidery and a midi hem is definitely one of them. She does vintage glamour so easily and I think that she would more than do this dress justice especially when paired with a romantic updo, smokey eyes, nude glossy lips, a pair of silver Tabitha Simmons ‘Eve’ sandals, & Chanel Fine Jewelry diamond cluster earrings. 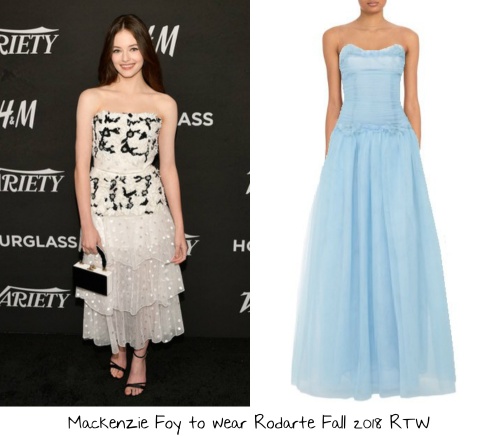 Mackenzie Foy started to gain acclaim when she played Renesmee in The Twilight Saga: Breaking Dawn – Parts 1 & 2. She has also had role in films like The Little Prince, Interstellar, and The Conjuring. This year though Mackenzie has really been embraced by the world of fashion. She has been rocking Chanel, Rodarte and Erdem on red carpets just this year alone. In fact the designers she has been wearing have actually been the same favorites of her The Nutcracker and the Four Realms co-star Keira Knightley. As the main star of this film it could be very likely to see Mackenzie wearing something from Chanel Couture, after sitting front row at the Fall 2018 Couture show, for this red carpet, but I decided not to go down that route. Instead I wanted to go for something more of a princess moment with this ice blue Rodarte Fall 2018 RTW strapless tulle drop waist gown which features a straight neckline, fabric flower embellishments, and an a-line silhouette. This is definitely a very flirty and feminine gown and I think it would be a perfect moment for the 17 year old actress to bring to life for this red carpet. I believe that this gown is beautiful and would be perfectly complimented with a pair of chic matching ice blue Jimmy Choo ‘Misty’ suede sandals, a sleek bun updo, defined eyes, pink lips, and Tiffany & Co. diamond and aquamarine drop earrings.

American Ballet Theater’s prima ballerina Misty Copeland plays the character of The Ballerina in The Nutcracker and the Four Realms. We don’t often see Misty on the red carpet so it was kind of challenging to find the perfect gown for her to wear on this red carpet. I decided to go a chic, glamorous, and simple route opting for this dark blue Jason Wu v-neck crinkle chiffon gown which features an asymmetrical pleated bodice, a defined waist, and a flowing a-line skirt. Is this something that would bust a best dressed of the year list? No, but it is an absolutely beautiful moment and I do believe that it would be major on the red carpet at this premiere. Navy defined smokey eyes, sleek vintage inspired updo, dark dusty rose pink lips, a navy glitter Marchesa marbled acrylic clutch bag, dark blue Tom Ford velvet ankle strap sandals with a rock crystal embellished heel, and a pair of Martin Katz diamond and sapphire drop earrings would all ensure that Misty is able to hang with the high fashion heavy hitters that also star in this film.

The LA premiere of The Nutcracker and the Four Realms is expected on Monday October 29, 2018.