I’m already behind on my Emmy Awards wishes and I actually live in North Carolina, so depending on how Hurricane Florence affects the part of my state I may or may not lose power and then I won’t be able to keep updating If I Was A Stylist. I am not expecting that to happen. But just wanted you all to know where things will stand. So with that being said I am really excited about the wishes in this latest post.

Angela Sarafayn has always intrigued me. She is a sleek modern beauty and while she personally isn’t nominated I would be surprised if she isn’t on the red carpet on Monday to support he show Westworld. Last year we saw Angela as a ray of sunshine in a bold yellow Elizabeth Kennedy gown on the Emmy Awards red carpet. For this year I went more glamorous and angelic for Angela with this white Antonio Grimaldi Fall 2018 Couture column gown which features a crystal embellished bodice and an attached cape train. It is a very chic moment and we have seen quite a few international stars wearing Antonio Grimaldi on the red carpet at the Venice Film Festival and I definitely think that Angela is the perfect person to bring this gown to life on the Emmy Awards red carpet especially when styled with a sleek updo, smokey eyes, dark red lips, a white pearl embellished Jimmy Choo ‘Cloud’ clutch, white Jimmy Choo ‘Talia 100’ sandals, and a pair of Hueb ‘Labyrinth’ diamond cluster starburst earrings. 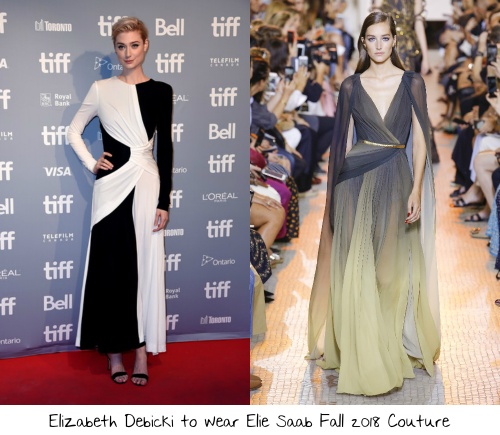 Elizabeth Debicki finally really owned up to her level of glamour this past week while promoting a couple of her films in Toronto wearing Armani Prive, Schiaparelli, and Prabal Gurung and I am praying that she delivers something amazing on the red carpet at the Emmy Awards on Monday. I swapped out the Armani Prive gown I had originally picked for Elizabeth to wear on this red carpet for this grey and yellow ombré Elie Saab Fall 2018 Couture pleated chiffon gown which features a plunging neckline, asymmetrical draping, a gold belted waist, and cape because that original gown was too similar to the look that she just work in Toronto. I think that Elizabeth would totally be one of the most ethereal ladies on the red carpet wearing this Elie Saab Couture gown. It is very chic and I feel like the charcoal grey and dusty lemon coloring would look so chic against Elizabeth’s skin tone. A romantic updo, defined eyes, rose pink lips, a pair of two tone gold Saint Laurent ‘Amber 105’ sandals, and 19th century Fred Leighton diamond drop earrings (the bottom right ones) all would really add the perfect finishing touches to this moment for Elizabeth. 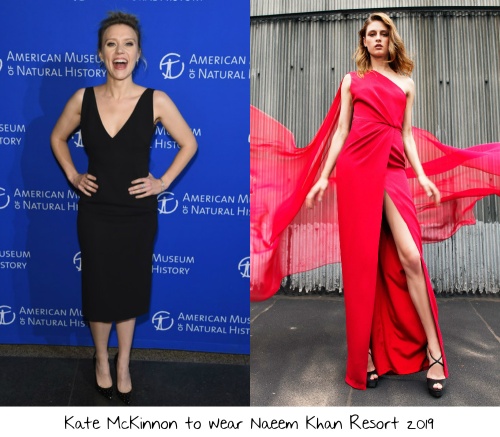 Kate McKinnon has been very up and down with her style in my opinion. I really want to see the Outstanding Supporting Actress in a Comedy Series nominee and presenter bring a really chic moment to the Emmy Awards red carpet on Monday. That is why I went to this red Naeem Khan Resort 2019 one shoulder gown which features a draped, one shoulder bodice, cape detail, and a column silhouette. I am obviously predicting a lot of cape styles for this years red carpet. I love the trend. They add a bit of drama to simple styles and I think that is exactly why I wanted to pick this gown for Kate. Without the cape this is just another one shoulder column gown, but the cape adds just the right amount of drama to really up the glamour level of this look. I think that with a sleek updo, defined eyes, red lips, red Giuseppe Zanotti ‘Sophie’ patent leather sandals, and a pair of Djula ‘Beverly Hills’ princess cut diamond wreath earrings that this would just be a really glamorous moment for Kate to wear on the Emmy Awards red carpet.

Maisie Williams, AKA Arya Stark from Game of Thrones, also may not be nominated for an Emmy Award this year (or presenting as far as I am aware,) but I would be shocked not to see her on the red carpet supporting her nominated co-stars and the show itself which is also nominated for Outstanding Drama Series. The two times that Maisie has attended the Emmy Awards she has opted for short dresses from British designers Abby Brown and Markus Lufper. I decided to keep the spirit of that idea alive, and keep the British designer tradition, by opting for this iridescent white Huishan Zhang Fall 2018 RTW ‘Madaket’ gown which features a crew neckline, a fitted bodice, and a full skirt layered over a mini skirt. I feel like we don’t see enough Huishan Zhang on the red carpet and I definitely think that this fun gown is totally something that Maisie would wear on the red carpet. I want to keep the fun nature of this gown alive in the styling as well so I would opt to have Maisie pair this gown with a curly bob hairstyle, defined eyes, pink lips, pink neon glitter Sophia Webster ‘Soleil’ ruffled leather sandals, and statement pink sapphire, ruby, diamond, and pink opal Anabela Chan ‘Passiflora’ earrings.

Sandra Oh is nominated for her first Emmy in nine years for her performance in Killing Eve. She is the first Asian American actress nominated for Outstanding Lead Actress in a Drama Series and very well could take home the trophy, though the category is extremely tough. I turned back to the same brand that delivered one of my favorite red carpet moments that Sandra has had in the past, Marchesa. The brand dressed Sandra in a gold embroidered column gown for the 2009 Emmy Awards and I loved it. For this years red carpet I went for a more detailed gown than I think we have ever seen Sandra wearing on the red carpet, but I definitely think that this antique silver Marchesa Pre-Fall 2018 column gown which features a plunging V neckline, fully beaded silver metallic lace, with tiers of ostrich feather fringe would be a really glamorous option for the red carpet. Aside from Scarlett Johansson, Gwen Stefani, and Vanessa Hudgens we haven’t seen Marchesa on the red carpet since the Weinstein scandal broke almost a year ago. I feel like with her history with the brand that Sandra would be the perfect person to give the brand a major red carpet moment at the 2018 Emmy Awards. I think that styling this gown with a loose romantic updo, smokey eyes, antique rose lips, a champagne glitter Jimmy Choo ‘Trinket’ clutch, a pair of nude crystal embellished Jimmy Choo ‘Romy’ pointed toe pumps, and Niwaka ‘Hanayuki’ diamond floral chandelier earrings would all make sure that this that major moment I know it could be.

Tina Fey may have lost the Outstanding Guest Actress in a Comedy Series trophy to Tiffany Haddish over this past weekend at the Creative Arts Emmy Awards, but we will still see her at the Primetime Emmy Awards on Monday as a presenter. I feel like over the last two years Tina has really played with fashion, and I have loved it. I thank her stylist Cristina Ehrlich for pushing her out of what was her comfort zone and I cannot wait to see what they will bring to the red carpet at Emmy Awards on Monday night. I went for a chic, yet still bold, statement picking this black Viktor & Rolf Sior Resort 2019 gown which features a column silhouette with a draped multicolor sequin striped one sleeved neckline and a thigh high slit. This gown is sexy and glamorous while still being very classic in its shape and I definitely think that while it definitely continues to push Tina’s comfort zone that it would be a really glamorous moment for her to bring to this red carpet. I wouldn’t want to take anything away from that sequined sleeve and neckline so I would personally style this gown with a sleek updo, defined eyes, pink lips, a black satin Inge Christopher crystal embellished clutch, a pair of black Aquazzura ‘Nathalie’ sandals, and simple Harry Winston white and pink diamond drop earrings to really let the gown stay the statement of this ensemble.