I always am excited about the fashion at the Venice Film Festival. The festival always turns out Best Dressed of the Year nominees, having made my end of the year list three times in the past (thanks to Diane Kruger once and Emma Stone twice.) I had high expectations with this being one of the more star studded editions of the festival in a while and I definitely think that the stars owned up to those expectations.

1) Lady Gaga in Valentino Fall 2018 Couture at the “A Star Is Born” Premiere: I was driving home from work on the day of the “A Star Is Born” premiere and when I saw a Twitter alert saying that Lady Gaga was wearing Valentino Couture on the red carpet I sped up just a little bit to get home to my computer just a little bit faster. When I booted my computer and saw her wearing this baby pink Valentino Fall 2018 Couture off the shoulder feathered ballgown on the red carpet I felt my heart start to flutter. I was really surprised to see this gown on the red carpet. I loved it when Kaia Gerber graced the runway wearing this gown, but I didn’t think it was going to be a red carpet moment. It was one of these very editorial gowns, but I should have known that if anyone could have sold this gown to me it would have been Lady Gaga. I can totally tell you that this will 100% be on my Best Dressed of the Year list. So good.

2) Sara Sampaio in Armani Prive Fall 2018 Couture at the “First Man” Premiere: Giorgio Armani Beauty was one of the presenting sponsors of the Venice Film Festival this year so we saw the festival kick off with a lot of friends of the brand walking various red carpets wearing gowns and cocktail looks from the brand. I would have expected Cate Blanchett to have been my top Armani spokeswoman on this list, but Sara Sampaio wore this champagne gold Armani Prive Fall 2018 Couture strapless gown which features a crystal encrusted bustier, a dramatic bow, and mermaid style skirt with such ease and dramatic glamour that it won my heart right away. I had actually put this on my wish list for Cate Blanchett to wear for the festival, but Sara far exceeded the expectations that I had for this moment.

3) Natalie Portman in custom Gucci at the “Vox Lux” Premiere: I had pretty much put Natalie Portman in her standard box of glamour when it came to what I was expecting to see her wearing in Venice this year, but she shocked the hell out of me when she stepped outside of her Dior contract and wore a dazzling custom Gucci gown for the premiere of her film “Vox Lux.” It was definitely a major 80’s moment (which is totally on trend for fall) and I wouldn’t have expected Natalie to really make it work, but she really did.

4) Dakota Fanning in Georges Hobeika Fall 2018 Couture at the Jaeger-LeCoultre Gala: When I watched the Georges Hobeika Fall 2018 Couture show I saw a lot of moments that made me think of Dakota Fanning, so when she stepped out during the Venice Film Festival for the Jaeger-LeCoultre Gala wearing a nude tulle tea length gown with orange and gold beaded embellishments I was very excited. It was a personal best for Dakota. She brought the feminine glamour from head to toe. Usually I am thrown off her looks because of her lackluster hair and makeup, but this time everything about her look was on point.

5) Cate Blanchett in Armani Prive Fall 2018 Couture at the “A Star Is Born” Premiere: Now while I might have expected Cate Blanchett to rank a little higher, she did deliver easy glamour on the red carpet. The premiere of “A Star Is Born” was a feathered affair and Cate brought us easy glamour wearing a black velvet gown which features a dramatic plunging sweetheart neckline, sweeping train, and a white feather off the shoulder capelet. She is the perfect person to bring Armani Prive to life on the red carpet and this gown really was just glamour defined.

6) Nicole Warne in Armani Prive Spring 2018 Couture at the “A Star Is Born” Premiere: The premiere of “A Star Is Born” was also a huge red carpet for Armani Prive ambassadors. The brand brought glamorous influencer Nicole Warne to the festival this year and she rocked a couple of red carpets, but the one that I was most enamored with was the red, white, and blue watercolor print draped strapless ballgown from the Armani Prive Spring 2018 Couture collection. I was SHOCKED with this moment. I have wanted to see the right person bring this gown to life on the red carpet since it came down the runway in January. It was definitely a risk for the blogger to bring to this red carpet, but she was definitely able to hang with the likes of Cate, Gaga, and more who really brought it for this premiere.

7) Tilda Swinton in custom Haider Ackermann at the “Suspiria” Premiere: I always love a Swinton Sighting so when her film “Suspiria” was selected for this years festival I was really excited to see what she was going to bring to the red carpet. She turned back to her good friend Haider Ackermann for both the photocall and premiere look for “Suspiria.” Both looks were amazing, but I really loved the modern vampire ensemble vibes that Tilda delivered on the red carpet at the premiere in her custom red Haider Ackermann gown which features a ruffled neckline, 3/4 length sleeves, column silhouette, and side slits on both sides of the gown. It was the perfect meshing of simplicity and edge that I think that only Tilda could have sold to me. 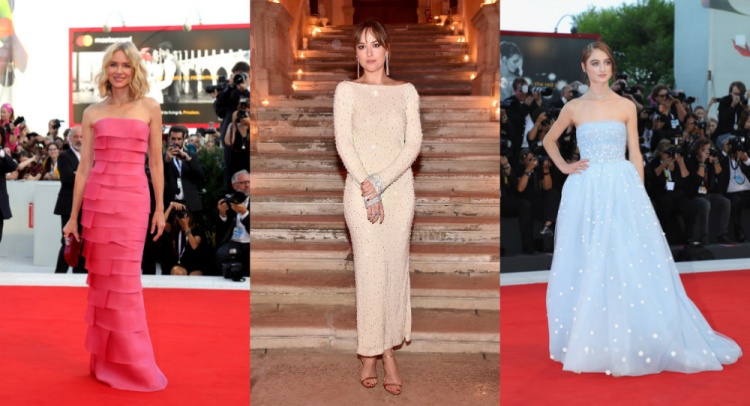 8) Naomi Watts in Armani Prive Fall 2018 Couture at the “First Man” Premiere: I was very excited to see what Naomi Watts was going to bring to the Venice Film Festival as a jury member this year. It had been a while since Naomi had a major moment on the red carpet, and she didn’t disappoint me. She started the festival on the high note wearing a hot pink Armani Prive Fall 2018 Couture strapless tiered organza column gown. It didn’t surprise me that Naomi wore an Armani Prive gown at the festival since the brand is a presenting sponsor and the fact she has had some major Armani moments in the past. I loved that she paired the gown with loose waves and a red Judith Leiber clutch.

9) Dakota Johnson in custom Miu Miu at the “Suspiria” After-Party: I have to say that I wasn’t expecting to put Dakota Johnson in by Best of Venice list heading into the festival. She brought a lot of unexpected moments to the red carpet. I expected that since she is a Gucci brand ambassador that she was going to give us wall to wall Gucci over the course of the festival. So the fact that she wore two Dior looks and custom Miu Miu. I loved the major 90’s vibes (also very on trend for fall) that we saw from Dakota when she stepped out for the “Suspiria” premiere after-party wearing a custom nude Miu Miu long sleeve midi dress which features chic crystal embellishments. It was a simple look compared to the Dior Couture gown she wore for the premiere, but this came across as effortless.

10) Raffey Cassidy in custom Oscar de la Renta at the “Vox Lux” Premiere: I had no idea who Raffey Cassidy was before she stepped out in Venice to promote “Vox Lux” with Natalie Portman and Stacy Martin, but after she wore off the runway Louis Vuitton for the films photocall and custom Oscar de la Renta for the premiere I definitely know who she is now. I loved the strapless powder blue custom Oscar de la Renta tulle ballgown which features white paillette sequins. She got her shoes tangled in the many layers of the dress and Natalie and Stacy came to her rescue. It was a beautiful moment to make people take notice of her style, and take notice I did.

One thought on “Best Dressed at the 2018 Venice Film Festival”