The Toronto International Film Festival is an interesting place. There are all different types of looks that walk the red carpet. Surprisingly since I started If I Was A Stylist in 2011 a look from the Toronto International Film Festival has only made my Best Dressed of the Year list once. That was Kristen Stewart back in 2012 wearing Zuhair Murad Couture. Could someone make the list from this festival this year? Who knows, but I feel like with the wide variety of stars who have films screening at this festival this year that the possibility is definitely there.

Following opening the 2018 Venice Film Festival wearing Valentino Couture and Chanel while promoting First Man, Claire Foy will bring the film to TIFF. I am really excited to see what more Claire will bring. She has always been one that I know has major potential, but rarely lives up to it. Her Valentino Couture moment was a bold and unexpected style moment, but I was still left wanting more. So for her TIFF premiere I wanted to go down the route of something custom with this light pink custom Calvin Klein by Appointment strapless column gown which features floral embroidery and a sash draped on the side. Claire hasn’t had a custom Calvin Klein moment on the red carpet, but I think that the sleek, feminine glamour of this gown is perfect for Claire to bring on the red carpet in Toronto. Where I often find Claire falls short with her looks isn’t in the wardrobe she chooses, but in the way that it is styled. I think that this would be that major moment I am so craving from Claire if she styled it with a sleek hairstyle, defined eyes, bold bright pink lips, a pair of rose pink Calvin Klein asymmetrical crystal strap sandals, and Cartier High Jewelry diamond and ruby drop earrings.

Ryan Gosling always keeps things very classic when it comes to his red carpet moments, but thy are always just a little bit more modern. For the First Man premiere in Venice Ryan rocked a cream Gucci dinner jacket sans tie and it was that chic subtle statement menswear moment that he is known for. For Toronto I went to something much more traditional with this bold navy blue Canali formal smoking tuxedo for Ryan. Like it was on the FarFetch website it would have to be perfectly tailored for me to get really excited to see on the red carpet. The classic styling would make it a very chic moment for Ryan.

Julia Roberts has two projects screening at TIFF this year, but I only have one wish for her and that is for the premiere of her film Ben Is Back. Julia is very rarely someone I get excited about seeing on the red carpet, but I am really interested in seeing what she will wear for this premiere. I would imagine that Julie will most likely wear something black from either Givenchy or Valentino. I actually went backwards picking this black velvet and navy pleated crepe Christian Dior Pre-Fall 2018 caplet gown for Julia. While I think that the collection isn’t very likely I think that this gown is perfect for Julia’s sense of style. It is chic without being boring and that would make for a very glamorous moment for her. I think that a romantic updo, simple barely there makeup, a custom navy velvet Christian Dior clutch, and a pair of black Christian Dior ‘D-Mesure’ crystal embellished slingback pumps would really ensure that this is a very glamorous moment.

It was at the 2017 Golden Globe Awards after party when I first learned who Kathryn Newton was. I tweeted that she was wearing a real statement making Gucci gown and it went semi viral. I couldn’t believe how many people liked and/or retweeted it. I had no idea who she was then, but I do now. She had several small rolls in the likes of Big Little Lies, Three Billboards Outside Ebbing, Missouri, and Blockers. She stars in Ben Is Back alongside Julia Roberts and I decided that I would go back to that same brand that made me take notice of her in the first place. I think that this bubblegum pink Gucci Fall 2018 RTW silk-blend jacquard gown which features a slender bodice, delicate bow and pleated trim bodice, and an a-line skirt is exactly what I think that we should see from Kathryn on the red carpet in Toronto. A pink velvet Tyler Ellis ‘Perry’ clutch, a romantic updo, defined eye, light pink lips, and a pair of pink and gold Gucci t-strap sandals embellished with a crystal tiger head all would really ensure this is a beautiful moment for Kathryn to bring for her first Toronto Film Festival red carpet appearance. 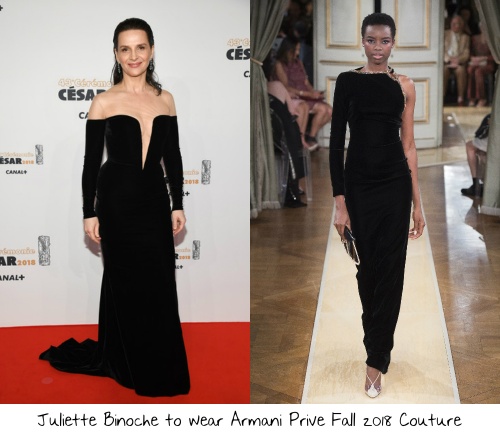 I was shocked that Juliette Binoche skipped the Venice Film Festival premiere of Non-Fiction (Double Vies) and I am praying that she doesn’t skip out on the films premiere in Toronto. I want to see Juliette give us a glam moment with this black velvet Armani Prive Fall 2018 Couture one sleeved column which features gold tube crystal embellishments around the neckline and armhole. This gown could very well stay optioned in a suite in Venice where Armani Beauty is a presenting sponsor and loads of stars have been wearing the brand on the red carpet at that festival. I think that this sleek gown is perfect for the Toronto red carpet and Juliette would deliver it in a very chic manner. With a sleek updo, defined eyes, burgundy lips, a black velvet Jimmy Choo clutch, and a pair of black velvet Paul Andrew buckled sandals I know that Juliette would own this moment on this red carpet.

The 2018 Toronto International Film Festival will open on Thursday September 6, 2018 and runs through Sunday September 16, 2018.