We learned yesterday that The Old Man & His Gun has been selected as a special screening premiere during the 2018 Toronto International Film Festival. I wonder if with that premiere happening at the major film festival if it will screen outside of a festival before it is released in theaters on September 28, 2018. With a star like Elisabeth Moss who doesn’t really seem to like to do red carpets I wouldn’t hold my breath, but who knows? 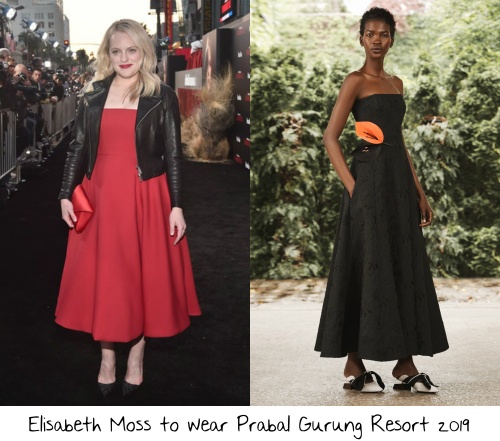 When it comes to her red carpet style I have never been blown away with Elisabeth’s style. I was hoping that when The Handmaid’s Tale became such a critically acclaimed production that we would really see this bold side of Elisabeth’s style. I always thought that when she was winning for her performance in Mad Men that she had great style, but that did not happen. She has also become almost an unofficial brand ambassador for Dior, and you know my thoughts on Dior ambassadors. If there is a premiere in LA for The Old Man & the Gun I would love to see Elisabeth step away from Dior, but I kept her favored midi silhouette. I really do think that this black Prabal Gurung Resort 2019 floral embroidered tea length gown which features a strapless neckline, 3D black and orange calla lily embellishment on the hip, and pockets(!!!) is the perfect moment for Elisabeth to rock on this red carpet. The shape is nothing new for her, but I think that in black with the visual floral detail on the hip push it in the right direction. I would keep the styling rather simple pairing her now strawberry blonde locks in a loose bun updo, defined eyes, soft rose pink lips, and a pair of black Roger Vivier gold flower strass embellished buckle detail pumps to really help Elisabeth get her style back on track to being Best Dressed once again.