A week from tomorrow Paris Haute Couture Fashion Week will kick off. The July edition of Paris Couture is really important because the gowns, casual looks, and cocktail ensembles that we see come down these runways will be the options to get stars through all of the fall film festivals, blockbuster movie premiere promo tours, the Emmy Awards, and the first half of awards season. The 21 big shows will undoubtedly show some really great moments to bring over the next several moments. One of the first major shows of the week will come on Sunday July 1, 2018 when Clare Waight Keller, on the heels of dressing Meghan Markle Duchess of Sussex for her wedding, will present her second couture collection for Givenchy. The collection will be titled ‘Caraman’ and be a tribute to the houses founder Hubert de Givenchy who passed away earlier this year. Since taking over the house Clare has delivered hit collection after hit collection and I am sure that this tribute collection will be another hit for her and I would love to see her have a star studded front row. Her ready-to-wear shows have been star studded, but there was a major absence of Hollywood star power at the Spring 2018 Couture show. I hope that is different this time. I went through some of the stars who have slayed the red carpets so far this year wearing Givenchy to pick five lovely ladies who I would really love to see perched front row to take Clare’s newest collection in.

During her run as the Madame le President of the 2018 Cannes Film Festival jury Cate Blanchett rocked two Givenchy Couture ensembles. One a strapless pleated tulle lace jumpsuit and the other an ombré rainbow tiered gown. She has just wrapped the promo tour for Oceans 8 and is expected to promote two films this fall with Mowgli and The House with a Clock in its Walls, so I would love to see her take in the newest Givenchy Couture collection. She was among one of the many stars who were at Clare’s ready-to-wear debut. To sit front row at this show next Sunday I would love to see Cate rock this Givenchy Resort 2019 ensemble which features a chocolate brown sequin long sleeve tunic with an asymmetrical hem and a pair of ivory front pleated wide leg pants. As soon as I saw this look in the new lookbook back at the end of May Cate was the first person I thought of. It is that sharp yet relaxed sense of glamour that I think that Cate brings to the red carpet so often. I think that with simple waves, simple defined eyes, rose pink lips, and a pair of white Aquazzura ‘Optic Mule’ nappa leather and PVC pointed toe buckled pumps that we would definitely see a really chic frow moment from Queen Cate.

Fan Bingbing was also one of the stars who helped celebrate Clare’s first ready-to-wear collection back in October of 2017. Since then the most memorable moment that Fan has had in Givenchy was when she wore a black Givenchy Couture suit while promoting the announcement of production of her upcoming spy film 355 with Lupita Nyong’o, Marion Cotillard, Penelope Cruz, and Jessica Chastain. As regular readers will know Fan is one of my favorite red carpet stars because she isn’t afraid to take a risk. The look I would love to see her rock while perched front row is definitely a risk. This Givenchy Resort 2019 ensemble which features a dark pool blue long sleeve top with a dramatic ruffle and a patent leather midi skirt is a totally 80’s moment and I really don’t know many people that could sell this look to me like I know Fan could especially if she paired it with a sleek high ponytail, thick winged eyeliner, red lips, a black Givenchy ‘Infinity Flap’ chain detailed shoulder bag, and a pair of black Givenchy studded buckle strap sandals.

As I have made my way down writing this post I have realized that I basically want a reunion of the stars who were at Clare Waight Keller’s debut at Givenchy last October. Julianne Moore joined Cate and Fan on that front row and I would love to see her bring her signature sense of glamour to the front row at the Givenchy Fall 2018 Couture show. During Cannes this year Julianne rocked Givenchy both on the red carpet and off. I feel like Julianne would look so incredibly chic wearing this cognac brown Givenchy Fall 2018 RTW long sleeve flapper draped dress. This is such a beautiful dress and I definitely think that it is something that Julianne would definitely be drawn to. This would be a head to toe frow chic moment if she pairs this gown with loose waves, defined eyes, burgundy lips, a chestnut Givenchy ‘GV3’ frame chain strap bag, bronze Brian Atwood metallic snakeskin effect ankle strap sandals, and a pair of Cartier High Jewelry diamond and orange topaz earrings. 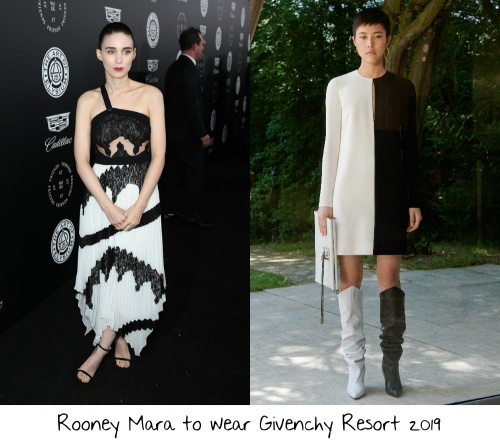 Like almost everyone else on this list Givenchy devotee Rooney Mara was also at Clare’s debut at the house and I would love to see her take in the newest couture collection. Rooney keeps this very basic and usually is seen in either black or white, sometimes a mix of the two. I did mix the two in my wish for her to rock on this frow picking this half white and half black Givenchy Resort 2019 long sleeve shift dress which features a small keyhole cutout on the bodice. This is that simple and chic style that we are used to seeing from Rooney on the red carpet and I think to take in a new Givenchy collection that this would be a perfect option. When it come to styling Rooney is usually rather simple so I would just add a sleek low bun, defined eyes, red lips, and a pair of black Givenchy ‘Shark Lock’ platform sandals. 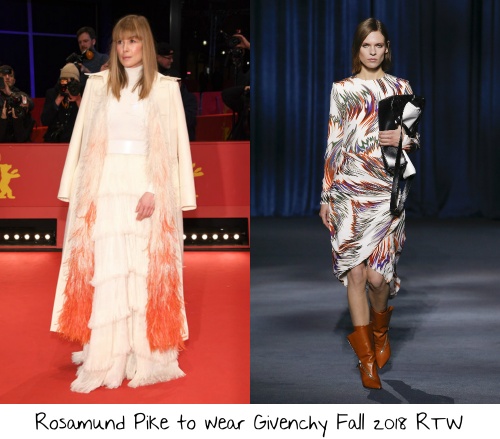 Rosamund Pike was the second person to get their hands on a couture creation by Clare Waight Keller for Givenchy when she stepped onto the red carpet at the 2018 Berlin International Film Festival wearing a cream tiered lace gown paired with a matching coat that was lined in orange ombré ostrich feathers. That is still one of my favorite looks of the year and it just may make an appearance on a Best of the Year list at some point. So I would love to see Rosamund make an appearance on the front row at the Givenchy Fall 2018 Couture presentation. I took inspiration in that look picking this white Givenchy Fall 2018 RTW feather print dress which features long sleeves, strong shoulders, and a faux wrap skirt for her to rock from her perch. It is a chic statement moment and I think that if she paired this dress with an orange suede Jimmy Choo ‘Celeste’ clutch, chic waves, defined eyes, nude lips, a pair of nude suede Givenchy ‘Shark Lock’ platform sandals, and Katherine Jetter mexican fire opal pendant drop earrings that this would be a major moment for the front row.

The Givenchy Fall 2018 Couture presentation during Paris Fashion Week will take place on Sunday July 1, 2018. This show will stream live on Givenchy.com at 2PM EST.