The MTV Movie and Television Awards are definitely one of the red carpets I look forward to every year, but for fun looks. I don’t usually expect to see a Best Dressed of the Year worthy look on this red carpet, but I never say never. We tend to see really great cocktail looks on this red carpet and I hope that the stars will bring their a-game to this red carpet before many of them will hibernate until the fall festival season and the trail to awards season. 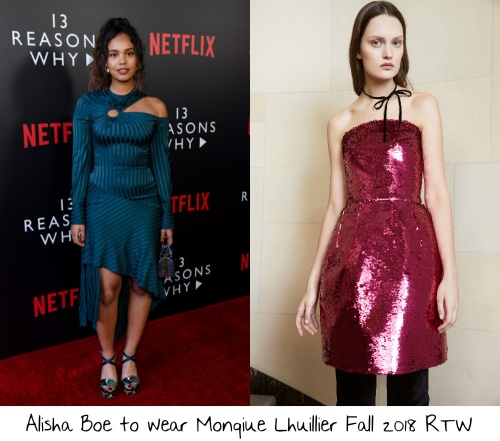 13 Seasons Why star Alisha Boe has been one of my (unofficial) ones to watch this year. She took a much more central role in the shows second season and has been wearing more and more high fashion looks off the runways. She hasn’t had a major wow moment yet, but I feel like if she snatched this fuchsia pink Monique Lhuillier Fall 2018 RTW sequined cocktail dress which features a strapless silhouette with a fitted waistline and a mini hem that she would have her first real wow moment. This is an obviously dazzling dress and I feel like that it might help Alisha stand out. The right dress can push and compliment a stars air of confidence on the red carpet and I feel like that is exactly what would happen in this case for Alisha. The dress is such a statement that I think a sleek bun updo, defined eyes, nude lips, a black and gold Monique Lhuillier tassel detail diagonal striped minaudiere, and a pair of black Monique Lhuillier ‘Marielle’ sandals with a sculpted gold cage heel would be the perfect styling to really make this a perfect red carpet moment.

Emilia Clarke is nominated for Best Hero for her performance as Daenerys Targaryen (aka Mother of Dragons) in the hit HBO series Game of Thrones. I have had mixed feelings about Emilia’s style since she went from her brown locks in favor of light blonde. The looks don’t often compliment her new hair, but that is not the case with the dress I’ve picked for Emilia to wear next Monday at the 2018 MTV Movie & Television Awards. I feel like this wedgewood blue Oscar de la Renta Resort 2019 strapless cocktail dress which s features a column fit, a drop waist ruffled asymmetrical hemline, and a built in bustier is a very chic, simple, and airy style and I really do think that it would be a perfect look for Emilia to rock on this red carpet especially if she pairs it with a romantic updo, defined eyes, pink lips, a pair of silver Francesco Russo ‘Waves’ sandals, and a selection of Oscar de la Renta jewels including crystal floral drop earrings and a resin and multi colored crystal cocktail ring.

Lupita Nyong’o is nominated with her Black Panther co-stars Chadwick Boseman, Danai Gurira, and Letitia Wright for Best On-Screen Team. In addition to that the film itself has seven nominations including Best Movie. Lupita knows how to bring color to the red carpet and so when I was thinking about bright colors and dresses that move incredibly well. That search made me think of the recently presented Emilio Pucci Resort 2019 dress which features a scoop neck, beaded embroidery, and a tasseled hem. I can already picture Lupita dancing down the red carpet working those tassels to their full potential. If anyone could really make this dress come to like it would be Lupita. Add a fun updo, smokey eyes, orange lips, an ombré orange Judith Leiber lizard skin clutch, orange satin and brown snakeskin Fendi color block sandals, and a pair of statement Gemco diamond, opal, and sapphire drop earrings and I know Lupita would own this look for me on this red carpet.

Tommy Dorfman is one of my favorite people to see on the red carpet. The queer actor blurs the lines of gender and what is “acceptable” for men to wear on the red carpet. It was actually on the red carpet at the MTV Movie & Television Awards red carpet last year that I first took notice of Tommy when he wore a Vivienne Westwood skirt suit with DSquared2 sequin platform heeled boots. It was a risk and I loved it. Since then he has sat front row of some of the most coveted runways including Balmain, Coach, Calvin Klein, and most recently Saint Laurent. I went to that collection that Tommy took in front row just last week I think that he would definitely be drawn to this look which features a tinsel fringe jacket, sheer shirt, and black skinny pants. It is extra, but chic all at the same time and I feel that if anyone could really make this look come to life with ease on the red carpet it would be Tommy. I think that with his signature messy curls and a pair of black Louis Leeman crystal embellished low top sneakers all would really make this one of the best menswear moments of the year.

Zendaya is kinda nominated for Best Musical Moment with Zac Efron for their performance of “Rewrite The Stars” from The Greatest Showman and will be presenting at this year MTV Movie & Television Awards. Regular readers will know that I LOVE me a Zendaya moment on the red carpet so I am really looking forward to seeing what she and BFF and stylist Law Roach are cooking up for her appearance on this red carpet. I would love to see Zendaya bring the couture factor to this red carpet wearing this Armani Prive Spring 2018 Couture short suit which features a heavily embellished short sleeve jacket and silk pleated mini shorts. We don’t often see many couture looks on this red carpet, but I really do feel like this look would be an extremely glamorous yet incredibly fun moment for Zendaya to bring to this red carpet. I think that this short suit would be perfectly styled with an 80’s inspired curly updo, smokey eyes, pink lips, a pair of navy Rene Caovilla crystal studded ankle wrap sandals, and Maxior ‘Kaleidoscope’ stud earrings in 18k white gold with marine waters, sapphires and diamonds.