Just one more wish list stand between us and my first premiere wish list of the 2018 Cannes Film Festival. The first major photocall on the opening day of Cannes is the one for the main competition jury. It was back on January 4, 2018 when the festival announced that Cate Blanchett would be acting as the president of the main competition that my mind started to wander about who could possibly be on the jury with her. In the world of Times Up and Me Too I wondered if Cannes would be bold enough to do an all female jury. Last year jury member Jessica Chastain called out the festival for it’s representation of women, so I was wondering how they would respond this year with that. The nine person jury might not be all female, but five of those nine are women. This years jury, headed by Blanchett, also features American Actress Kristen Stewart, American writer, director, producer Ava DuVernay, Burundian songwriter, composer, singer Khadja Nin, French actress Lea Seydoux, Chinese actor Chang Chen, French director Robert Guediguian, Canadian director Denis Villeneuve, and Russian director Andrey Zvyagintsev. A female dominated jury hasn’t been seen since 2009 when Isabelle Huppert was the jury president and I am looking forward to seeing what all of the ladies on this years jury will bring, but I am going to focus on those whose style I know. 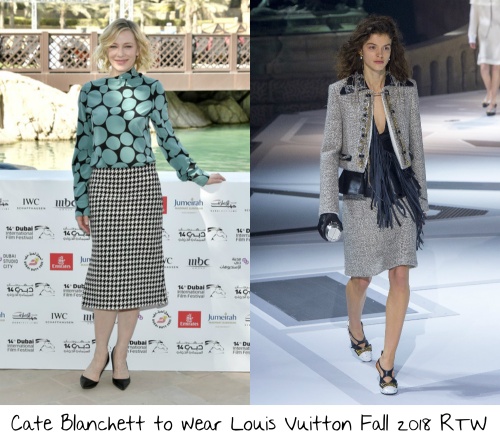 When they announced Cate Blanchett as the jury president this year my mind immediately started picking looks for her to wear over the festival. Cate loves fashion and it very well could be that with all the brands Cate has loved that we will not see her don the same brand twice. For the photocall I went to Louis Vuitton for Cate to rock on the famed balcony which over looks the French Riviera. I would love to see Cate take the platform wearing this grey tweed Louis Vuitton Fall 2018 RTW skirt suit which features chain embellishments on the lapel and down the edges of the jacket and fringe embellished leather top with a plunging neckline. This is a really chic and glamorous moment with a bit of an edge and I know that Cate would sell this look to me with ease. I think that with a whispy romantic hairstyle, defined eyes, pink lips, and a pair of black embroidered lace and nude mesh Gianvito Rossi ‘Giada’ pumps that this would be an absolutely glamorous moment for Cate to officially kick off Cannes in high style. 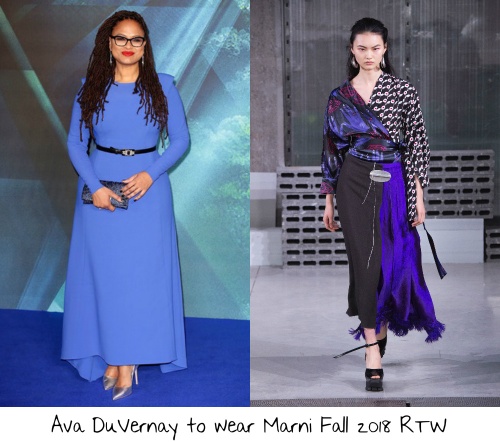 I have a feeling that most of what we see Ava DuVernay bring to the Cannes Film Festival will mostly be custom looks from the brands she loves like Prada, Greta Constantine, and Armani Prive. I pulled a lot of off the rack looks for Ava to wear this year since her MO is very modest, so the off the runway looks I’ve picked for Ava are very few and far between. For the jury photocall I went to a brand I definitely think that would align perfectly with Ava’s sense of style, Marni. It was an easy option for me to pick this multi color and print Marni Fall 2018 RTW satin ensemble which consists of an asymmetrical wrap style blouse and a high wist dual panel skirt with silver buckle detail on the waist. This is the high glam bohemian side of Ava’s style and I definitely think that she would be able to really sell this look to me on the platform overlooking the Riviera especially when styled with her signature braids, defined eyes, pink lips, and a pair of black Aquazzura ‘Hill’ strappy pumps.

Picking a jury photocall look for Kristen Stewart was the hardest. I had originally picked a white Cushnie et Ochs jumpsuit, and then it was worn. Then I picked a green Cushnie et Ochs jumpsuit, and it was then worn. So I went on a hunt for something we haven’t seen worn on the red carpet before, that fits both Kristen’s style and be bold enough for a Cannes Film Festival jury photocall. I knew I wanted a jumpsuit and I went on a hunt for the perfect one. When I saw this white, black, and gold Halpern sequined tulle jumpsuit which features patchwork prints, a ruffled mock neck, long sleeves, cropped pants with a flared hem I questioned myself for a second. I sent a photo of this look to several of my friends and when they said that it was a great look I felt okay. It is definitely a bold choice, especially for a daytime photocall, but I feel like Kristen would shut it down. With a sleek hairstyle, defied eyes, nude lips, and a pair of gold Le Silla ‘Grace’ crystal embellished sandals I definitely think that Kristen would own this look.

Lea Seydoux is a face of Louis Vuitton, but I am praying that she won’t wear the brand wall to wall during the festival this year. She used to be one of my favorites to see on the red carpet. She knows how to do glamour on the red carpet and I am hoping that all of her looks this year will bring back that feeling of love I have for Lea and her style. Since I picked a Louis Vuitton look for Cate I decided to go against the brand picking this gold foil brocade Alexis Mabille Spring 2018 Couture sleeveless trench dress. In Cannes couture at noon is a common practice and I definitely think that Lea is one of the ones who will bring couture to a photocall. I think that the glamour of this look is perfectly in tune with the vibe of the festival and I feel like with a sleek low bun, simple sun kissed makeup, and a pair of brown and gold Louis Vuitton ‘Odyssey’ sandals that Lea would have a great look to kick off the festival.