Keeping the ball rolling today I have my wishes for the 2018 Academy Award Best Supporting Actress nominees. At this time in exactly one week stars are going to be in their homes and hotel rooms with their glam squads getting ready for the biggest night in Hollywood. Back in December when the nominations in this category were just a rumor, I wasn’t all that excited. But the ladies who have been showing out on all of the red carpets during this awards season have me really excited to see what will come from them. 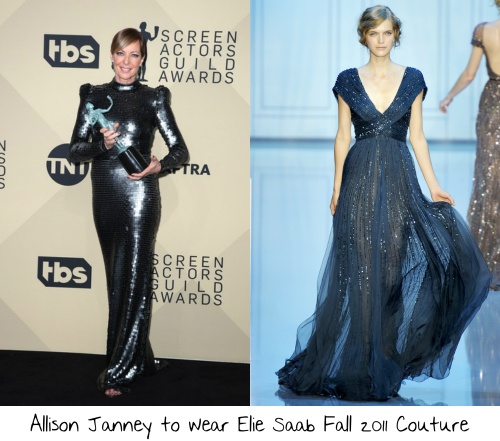 Allison Janney is my favorite to take home the Oscar next week and I totally want to see her have her best red carpet moment yet. With every red carpet that Allison has been on she has gotten just a little bit better. She’s given us Mario Dice at the Golden Globe Awards, Michael Cinco at the Critics Choice Awards, Yanina Couture at the SAG Awards, and Bibhu Mohapatra at the BAFTA’s and she has won wearing each gown. Something deep in my soul tells me that after wearing Rani Zakheim for the LA premiere of I, Tonya (the film that has earned her this nomination) that she might come full circle with another gown by the designer. I decided though to dive deep into the Elie Saab archives for a truly glamorous winning moment. I feel like if Allison stepped onto the Oscars red carpet wearing this ink blue Elie Saab Fall 2011 Couture cap sleeve gown which features a criss-cross draped plunging neckline, delicate beading, and a flowing skirt that Allison would not most likely just take home an Oscar next Sunday, but a spot on the best dressed lists. This gown is glamour and elegance personified and I think that it would be a really gorgeous moment for the actress. Allison is no stranger to Elie Saab Couture either having worn designs off the designers runway for the 2006 Emmy Awards. Finish the look with a sleek updo, smokey eyes, nude lips, a navy satin Judith Leiber Couture coffered rectangle box clutch, navy Prada satin sandals with a crystal embellished heel, and a pair of dazzling Butani High Jewelry diamond and sapphire earrings to really make sure that Allison is serving confident winners glamour from head to toe.

Going into awards season I wasn’t expecting much out of Lady Bird star Laurie Metcalf. So I have been pleasantly surprised by the looks from Sachin + Babi, Christian Siriano, Temperley London, Yanina Couture, and Cristina Ottaviano that she has worn over the course of awards season this year.  I went back to the designer that Laurie kicked off awards season wearing, Christian Siriano. The Project Runway star who just celebrated 10 years in business has never dressed one of the real big stars on Oscar night, but I definitely think that Laurie could be the first to give in that big Oscar night moment. I took a slate grey Christian Siriano Pre-Fall 2018 cap sleeve, ballgown and turned it into a rich royal blue. I immediately thought of Laurie when I saw this gown in the lookbook and I think that for this occasion that it would be perfect. I think the grey color from the lookbook would have washed out Laurie, so I think that swapping it for a bold color like this blue would add to the glamour of this look. I do have questions about whether or not the voluminous cap sleeves will work for Laurie with the volume of the skirt. I could see her asking Christian to also shrink the volume of the sleeves as well. Pair this gown with a navy velvet Tyler Ellis ‘Lily’ faceted clutch, silver MICHAEL Michael Kors ‘Paris’ metallic sandals with a sequined bow, a sleek updo, defined eyes, red lips, and a selection of Neil Lane diamond including a pair of dainty drop earrings, and a statement cuff to really ensure that this is a beautiful moment for Laurie, head to toe.

I was shocked that Phantom Thread star Lesley Manville took an upset nomination from Downsizing star Hong Chau at the 2018 Oscars. I have to say I am really surprised Phantom Thread got any nominations at all. It was the longest, most boring movie I saw all awards season. With that being said I don’t really know what to expect from Lesley next Sunday because she isn’t known for her fashion. I picked this chic silver Jenny Packham Pre-Fall 2018 long sleeve gown which feature polka dot embroidered tulle, a v-neck, a-line skirt, and dazzling sequins because I feel like from the very little I have seen of Lesley’s style that the silhouette of this gown falls right in line with than and for the fact that it would be a British actress wearing a British designer. I feel like whatever Lesley wears on the Oscars red carpet will be very chic and ladylike. I would style this gown with a silver Edie Parker ‘Jean’ hard shell clutch bag in genuine lizard skin, a vintage inspired updo, defined eyes, red lips, a pair of silver Valentino ‘Dolly’ metallic leather bow and PVC detailed pumps, and dazzling Fred Leighton art deco inspired diamond chandelier earrings to really ensure that this look is glamour defined from head to toe. 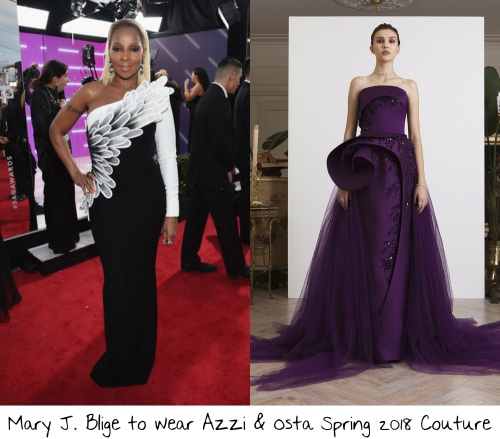 Mary J. Blige might not be the star expected to win in the Best Supporting Actress category, but I am expecting that she will be one of the big winners of the red carpet. Also don’t forget that despite her long career in music and film that this is the first time Mary is nominated for and Oscar. And she has two nominations. One for Best Supporting Actress and Best Original Song. I feel like she and stylist Law Roach are cooking up something really magical for next Sunday’s red carpet and I really want to see her deliver her best red carpet moment ever. I went for dramatic glamour with this origami rose draped Azzi & Osta Spring 2018 Couture rich purple strapless gown which features a column silhouette, dazzling beaded embellishments, and an a-line tulle train. We don’t often seen Azzi & Osta on the red carpet, but I feel like this gown would be a totally major moment for Mary to deliver on the Oscars red carpet. A sleek high bun updo, smokey eyes, nude glossy lips, a pair of deep purple Tom Ford sequined satin and velvet pumps, and a selection of Jacob & Co. jewels including statement diamond teardrop shaped earrings and an amethyst and diamond cocktail ring all would make for the perfect moment for Mary’s first Oscars.

Octavia Spencer is usually loyal to Tadashi Shoji. She wore his designs for the Golden Globe and Critics Choice Awards, but then on BAFTA weekend she wore Prabal Gurung and Sachin + Babi. So I am holding out hope that for the Oscars that Octavia has a statement gown from an unexpected designer up her sleeves. It was at last years Oscars when I was expecting another custom Tadashi gown from Octavia that she shocked me wearing a custom feathered silver Marchesa gown, so I feel like there is hope. I saw this amethyst Pamella Roland Fall 2018 RTW kimono inspired caped gown which features a round neckline, ombré sequins, and ostrich feather detail and something in my brain screamed Octavia. I don’t know what it was, but just from the moment I saw this gown come down the runway and its unapologetic glamour and drama just screamed Oscar night. I would of course want to have the gown lined for Octavia. It would be really great to see it lined in fabric dyed to match the ombré so none of the magic from the runway is lost on her. Only enhanced. I would keep the glamour going with the styling adding a romantic updo, purple smokey eyes, an amethyst Judith Leiber clutch, purple satin Badgley Mischka ‘Kiara’ crystal back peep toe pumps, and a pair of Chopard Red Carpet Collection diamond cluster earrings.