It was rumored at every major film festival this year (Cannes, Venice, and Toronto) had the buzz that festival veteran director Denis Villeneuve was going to be screening a long awaited Blade Runner 2049. Each rumor came with the caveat that since the movie was going to be released at the beginning of October that it might not screen since the production team had it very tight lipped surrounding the film. Well it wasn’t screened at any of those festivals. It will get it’s big red carpet premiere in Los Angeles next Tuesday October 3, 2017 and with international photocalls and screenings already taking place I am getting excited. 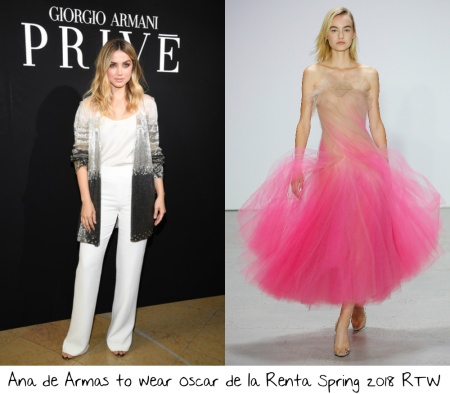 Spanish actress Ana de Armas is breaking into the mainstream Hollywood market as the star of Blade Runner 2049 and I am probably most excited to see what she will wear for this premiere. She has already worn looks from Chanel, Miu Miu, Mary Katrantzou, and Osman so far during this promo tour and has sat front row at the Armani Prive Fall 2017 Couture presentation and the Oscar de la Renta Spring 2018 RTW presentation. I was immediately drawn to the idea of Ana wearing this nude and hot pick tulle strapless tea length gown from the Oscar de la Renta Spring 2018 RTW collection. I would usually go for a dramatic couture gown with train for the leading lady of a blockbuster to wear for her film, but I think that the fact that Oscar de la Renta is one of the biggest and most coveted brands to wear on the red carpet right now that this hot off the runway gown would be a perfect look for Ana to wear for this premiere. It is kinda equal parts Audrey Hepburn and Disney princess, which is the total opposite of what the feel of the movie is. Sometimes you need to go left to have the most impactful moment on the red carpet. Since the gown is tea length a pair of great shoes is a requisite. I would love to see Ana pair this gown with a sleek high bun, a golden smokey eye, nude lip, diamond cluster earrings, and a pair of Christian Louboutin ‘Feerica’ crystal embellished pumps to really turn this into a best dressed of the year worthy moment.

Mackenzie Davis is one of the rising stars that are in this film and after her neon green Delpozo gown at the Emmy Awards with hot pink pumps I am really excited to see what she will bring to the red carpet at this premiere next Tuesday. I have wondered if Mackenzie could pull a hot off the runway gown to the red carpet. This coral sequin Alberta Ferretti Spring 2018 RTW halter gown walked the runway in Milan less than a week ago and I think that it would look beautiful on Mackenzie and I think with the help of her Hollywood power stylist Karla Welch that it could be made to happen, especially since this is the big blockbuster film premiere of the fall. Two things tend to happen following the presentation of spring collections in the fall. One is that everything gets worn at festivals, small awards shows, and movie premieres that lead up to awards season and the other is that designers hoard gowns for the big red carpet award shows in January. I am definitely hoping to see some of these looks on the red carpet and this is one that I think could be pulled for a major movie premiere red carpet. With a pearl and crystal embellished Judith Leiber ‘Couture Crystal Egg’ clutch, sleek updo, simple makeup, and a pair of nude Giuseppe Zanotti ‘Coline’ sandals Mackenzie will definitely make this a beautiful moment on the red carpet.

Robin Wright is probably the biggest name of the cast in this wish list, yes Blade Runner 2049 also stars Harrison Ford, Ryan Gosling, and Jared Leto, and I have this feeling that she will skip out on the red carpet at this premiere. I am hoping that she will. So far this year Robin has underwhelmed me with her style and I know that she has the potential to be one of my favorites. For the most part Robin sticks to black on the red carpet and I decided not to push the boundary for the LA premiere of Blade Runner 2049 with this black Atelier Versace Spring 2017 Couture beaded web gown. This gown screams simple sex appeal and I think that if anyone could really bring this gown to life on the red carpet it would be Robin. She would just ooze effortless glamour without taking the sex appeal of this gown to the max. Hair and makeup has been a big killer of a lot of Robins red carpet looks recently and I am hoping that for this premiere that she has everything perfectly in place. A sleek hairstyle, smokey eye, nude lip, a pair of diamond drop earrings, and black Casadei ‘Blade’ sandals would make sure that this look is perfect for Robin.

I hadn’t really heard of Sylvia Hoeks before I went to put this list together, but with looks from Loewe, Preen, and Christopher Kane I decided that I would put a wish for her to wear on the red carpet at the films premiere in LA. I would love to see Sylvia wearing this rose gold Marchesa Resort 2018 tiered fringe gown which features a plunging neckline with rose gold beading and a floral metallic lace underlay. The gowns 20’s inspired glamour would definitely be a perfect option for Sylvia to wear on her first big Hollywood red carpet. Old Hollywood waves, a lined eye, rose pink lip, diamond drop earrings, and a pair of rose gold Tony Bianco ‘Karvan’ sandals all would ensure that Sylvia really kills the red carpet at this premiere.