Wonder Wheel is a film that will have it’s world premiere at the 2017 New York Film Festival. I always love the red carpets for a Woody Allen film because I feel like stars really bring it when they promote one of his films. While this may not be a Cannes Film Festival premiere (several of Woody’s recent films have premiered at the famous French film festival) I am still expecting some great red carpet moments from the stars of this film.

At the Emmy Awards Jessica Biel showed that she ditched the bangs! I am really excited about that because I just didn’t feel the bangs on her. I don’t know if she just hid them in hairpieces or if they are gone for good. I picked this black shirred one sequin sleeve Tom Ford Spring 2018 RTW column gown with the idea that Jessica has the bangs, so I could go either way with it. I picked this gown for Jessica to wear for the New York Film Festival premiere of Wonder Wheel because it just screams modern glamour and I think that Jessica would be able to make it that sleek moment. If she does have the bangs still then I want her to have them blown out and hair straightened into a sleek long style and if she doesn’t then I want her hair styled into a sleek updo. Styling this look with a black Edie Parker ‘Jean’ glitter acrylic clutch, black Tom Ford zipper detail sandals, and de Grisogono diamond and emerald jewelry including a pair of drop earrings and a cocktail ring would all ensure that this look is the epitome of modern glamour.

Juno Temple is a free spirit with an eclectic sense of style so I definitely think that of the cast she will definitely stand out. Usually when I pick looks for stars to wear on the red carpet at premieres when they are members of an ensemble cast usually means I am trying to pick cohesive looks that all would work well on the red carpet, I decided to go a little left because that it what I would think Juno would do. I would love to see Juno take this black, pink, and gold brocade Vivienne Westwood Fall 2017 RTW strapless cocktail dress with the brands signature origami draped details and have it lengthened into a column gown. When it comes to the red carpet and especially major awards shows and film festivals we often see stars shy away from prints, but I think that if anyone could make it work it would be Juno. When it comes to her hair Juno has a lot of it and I would love to see her have bouncy tight curls with this dress. A smokey eye, pink lip, gold Elie Saab clutch, a pair of gold Jeffery Campbell ‘Obus’ sandals, and emerald and carnelian Cartier ‘Cactus’ drop earrings would add the perfect complimentary, and quirky touches to this look. 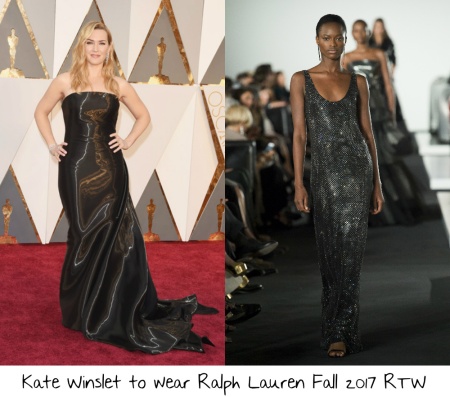 Kate Winslet almost always wears black or white on the red carpet. Since she wore a custom white Badgley Mischka gown while promoting another film at the Toronto Film Festival I would bet that she will be back in black at the New York Film Festival. Kate loves Ralph Lauren and there were quite a few gowns from his recently presented Fall 2017 RTW collection that I can see her wearing on the red carpet. Since NYFF is more on the simpler side when it comes to dress code I thought that this black crystal encrusted scoop neck tank gown which features a column silhouette would be perfection. It may not be anything new or boundary pushing but I can imagine that it would be a totally beautiful moment for Kate on the red carpet. I think this look is the perfect platform for some great jewelry. I would love to see Kate go to her favorite Jewelry brand Tiffany & Co. and find a pair of great diamond chandelier earrings (I couldn’t find any online that met what I was thinking about) and a really great ‘Masterpieces Ribbons Lucida’ diamond bracelet to add the sparkle to this look. Finishing the look with old Hollywood waves, a kohl rimmed eye, red lip, and a pair of black Casadei ‘Blade’ sandals would really ensure that this is a great look for Kate.