Paris Fashion Week kicks off on Sunday and this year “Couture Week” features more than just our regular couture designers. A few brands that typically show their ready-to-wear collections during New York Fashion Week have opted to show their Spring 2018 RTW collections ahead of the big couture presentations in Paris this coming week. The couture shows usually bring out the celebrity crowd so over the next couple of days I am going to make wishes for stars I want to see perched front row at the Fall 2017 Couture presentations. I went through and looked at some of the stars who had some of the best looks with different labels since the beginning of the year, starting first with Christian Dior. I have been one of the few fashion writers who has been skeptical of Dior under Maria Grazia Chiuri. We have seen the same styles in each of Maria’s collections, and the looks that haven’t been the same have been ignored.

I was beginning to think that Diane Kruger was going to be the next face of Dior, after wearing so many looks from the label one right after another. I think that isn’t going to be the case anymore, but Diane is one of the few who has consistently knocked it out of the park wearing the brand. Diane has been front row at several of Maria’s shows for Dior and wore the label for the Cannes Film Festival 70th Anniversary Soiree. I would love to see Diane back front row when Maria presents her latest couture collection for Dior next Monday. I think that this black fringe coat with a black and white plaid button down from the Christian Dior Cruise 2018 collection screams Diane and I think that for a front row that this look is perfect. With a pair of black and white strappy sandals, a black Dior shoulder bag, beachy waves on her bob, and dewy makeup this look is ready for the front row. 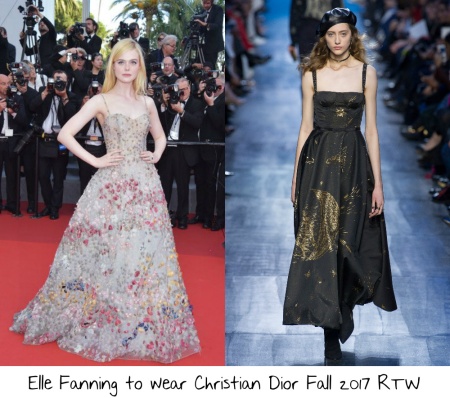 Elle Fanning also wore Dior Couture for the Cannes Film Festival 70th Anniversary Soiree and has really been one of the best dressed stars all year long and I am hoping that we will see her just continue to grow and grow and grow. We have seen Elle seated at a front row at ready-to-wear and cruise shows in the past and I think it is about time that she got her first couture show under her belt. I think that the Dior show is perfect because Elle fits the relaxed glamour of the Dior aesthetic under Maria Grazia Chiuri. These are the type of dresses that we have seen in several colors, patterns, and textures over the last several months. While I have been fatigued by these dresses on the red carpet I think that this dress would be a perfect look for the front row. The look id darker than the mostly pastel designs that we are used to seeing Elle wear on the red carpet, but I think that it would make a beautiful dark glam moment for her.

Nicole Kidman only attends couture shows and after she attended the Armani Prive show in January I wonder if she will be back in Paris for this new season. I would love to see Nicole keep up appearances in the first couple of days of the release of The Beguiled and I think that joining Elle front row at the Dior show. I would love to see Nicole perched on the front row at the Dior Fall 2017 Couture presentation next weekend wearing this denim ensemble from the Christian Dior Cruise 2018 collection. This vest top and midi skirt is completely covered in gorgeous embroidery and brown tassel detailing on the hems is beautiful and I think that Nicole is one of the few who could really pull this look off on the red carpet. A pair of bronze sandals, romantic loose updo, and a light pink lip would really just finish this look absolutely beautiful.