After taking a hiatus last year, after the failing of its first televised show in 2014, the Hollywood Film Awards will resume with a ceremony held on Sunday November 6, 2016. I am excited to see what will happen with the return of this red carpet. There is a great mix of stars that are set to be featured. Janelle Monae is going to be honored with the Hollywood Spotlight Award for her work in the film “Hidden Figures.” I love seeing Janelle on the red carpet because even though she sticks to a black and white box most of the time she always brings something chic and fabulous to the red carpet. For the Hollywood Film Awards I would love to see Janelle hit the red carpet in this absolutely amazing avant garde Christian Siriano Spring 2017 RTW ensemble which features a lot of sequins and dramatic ruffles. It would take a bold woman to really make this look work on the red carpet and Janelle is one of the few that I could see really making this look come to life on the red carpet. She would have to wear a pair of black stilettos to add a little height. I would say that Janelle should wear her hair pulled back and up adding a bold Edie Parker clutch and a red lip to really turn this into a great look.

I am super excited that we are going to be seeing more of Lily Collins on the red carpet again. I have long been a fan of Lily’s style and I am excited to see where another awards season is going to take her. At the 2016 Hollywood Film Awards Lily is going to be honored with the New Hollywood Award for her work in Rules Don’t Apply, which will get its first premiere days later at the AFI Fest. While I don’t see Lily and New Hollywood, as she has been in several films including Mirror Mirror and The Blind Side, I am excited to see what she will bring to the red carpet. I think that this sweet pink Valentino Spring 2017 RTW peasant style pleated gown would look so chic and elegant on Lily. We have recently seen Lily wearing a lot of Chanel and Saint Laurent styles, though she was a guest of Valentino at the Met Gala earlier this year, so her style is very unpredictable. I would imagine that she is going to go with something chic and elegant for an awards show red carpet. What would turn this gorgeous gown into a best dressed red carpet moment is loose wavy bob, light pink lip, a pair of simple diamond drop earrings, a diamond bracelet, and a pair of simple nude sandals.

Naomie Harris has been someone I have had my eyes on since she kinda burst onto the scene during the promo tour for the James Bond film Skyfall a couple of years back. Since then Naomie has had some luck with international red carpets, but hasn’t really been seen on the red carpets in the United States. At the Hollywood Film Awards, where she is going to be honored with the Hollywood Breakout Actress award for her work in Collateral Beauty and Moonlight this year,  we will kinda get our first taste of Naomie on a Hollywood red carpet. I went back and forth on what to pick for Naomie to wear for his red carpet. Usually we don’t see too many full on gowns at this event but I think that since she is going to be honored that why not go for it. This gorgeous citrus green Zac Posen Spring 2017 RTW jacquard gown which features a bateau neckline, cap sleeves, a fitted bodice, and a column skirt would be such a gorgeous moment for Naomie to wear as she accepts this award, and hopefully kicks off an awards season run that will take her all the way to the Oscars. 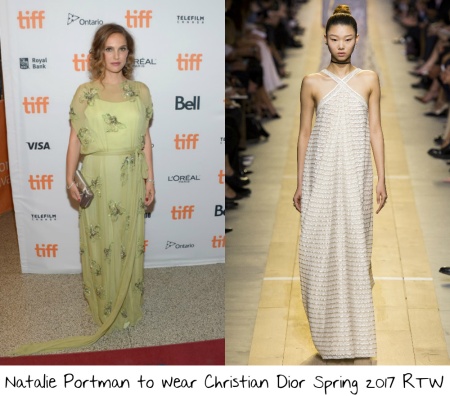 Awards season, pregnancy, and Natalie Portman all seem to go hand in hand with eachother. Natalie has her next shot at winning an Oscar for playing the role of Jacquine Kennedy in Jackie and the last time that Natalie was nomianted (and won) for an Oscar was when she was pregnat with her first child for Black Swan. I have to say that I have been mixed on my feelings of Natalies maternity style so far this year, as I was the last time, and I am hoping that she will just WOW from now until the Oscars. As a face of Dior I am expecting that Natalie will wear a lot of the brand (probably custom) over the next few months. I would love to see Natalie accepet her Hollywood Actress Award (for Jackie) wearing this gorgeous ecru Christian Dior Spring 2017 RTW lace ribbon criss cross halter gown, but there may be a caviat in that. Italian Olympic fencer Beatice Vio wore this gown as a guest at the White House State Dinner for the Italian ambassador earlier this month, but there were not photos of the athlete wearing the gown as she entered the cross hall into the dinner. So I am hopeful that we will still get this as a red carpet moment. While many of the looks from the Dior Spring 2017 RTW collection, the first for the house by new creative director Maria Grazia Chiuri, are not suitible for a burgeoning baby bump this is one of the few that is. Simple blush pink satin peep toe pumps, a nude Dior clutch, chic updo, and a light pink lip would really mark this as a gorgeous look for Natalie.

Rounding out this list is the gorgeous Nicole Kidman who will be honored with the Hollywood Supporting Actress Award. I am really excited to see what Nicole is going to bring to the red carpet over the course of awards season. This year Nicole has taken a lot of risks with her fashion choices with bold looks from Alexander McQueen, Atelier Versace, Rodarte, and Armani Prive and I am praying that her winning fashion run will continue. While it isn’t a bold look like her McQueen gown from the Academy of Country Music Awards I think that Nicole would be absolutely stunning in this white Olivier Theyskens Spring 2017 RTW bias draped tea length gown. I am really excited that Olivier has returned to fashion with his own label and I can’t wait to see it on the red carpet and I think that Nicole would be a vision in this gown. I think that with her hair in a loose updo, a red lip, silver clutch, silver sandals, and a pair of dainty diamond earrings that Nicole would be a vision on the Hollywood Film Awards red carpet.