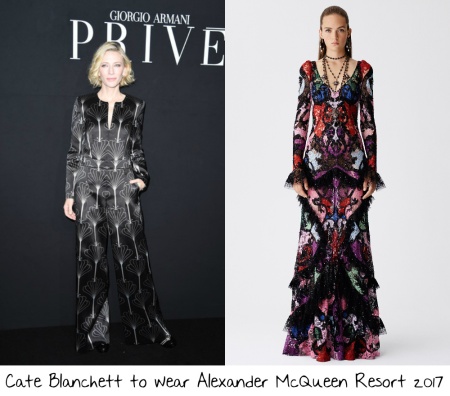 My wishes for the 2016 Toronto International Film Festival will come to an end today. I was originally going to end at the start of my VMA’s wishes, but then they added a whole slate of new films filled with some of my favorite red carpet ladies and I couldn’t pass up the opportunity to give some of them yet another wish. Cate Blanchett was one of the major factors in that decision. The gorgeous queen of the red carpet is slated to premiere the documentary Voyage of Time, which she narrates alongside of Brad Pitt at TIFF.  Cate has been faltering back and forth between looks I love and looks that I just withstand so far this year and I am hoping that when she is out promoting Voyage of Time that she really pulls out all the stops. For the Venice Film Festival premiere of this documentary I picked a gorgeously glam Armani Prive ball gown for Cate to wear, so I went with something a little more high fashion and impact making for TIFF. This amazing multicolored embroidered lace Alexander McQueen Resort 2017 gown which mixes 70s boho and Victoriana in such a modern way that I am super excited to see what it is going to turn out on the red carpet. Cate is one that I think that the grace and edge to make this look a real winner on the red carpet. A black McQueen clutch, black peep toe pumps, a chic wavy bob, light pink lip, diamond drop earrings, and a smokey eye would make my heart explode as this would probably be one of Cate’s best red carpet looks ever.

While I may not be Emily VanCamp’s biggest fan when it comes to her red carpet style she has had some pretty good moments in the past. She has not given me a major jaw dropping moment yet, but I think it could still happen. I would love to see Emily hit the red carpet at the TIFF premiere of Boundaries wearing the first couture collection from her go to designer J. Mendel. I am anxiously awaiting the first red carpet moment form the J. Mendel Fall 2016 Couture collection and while Emily might not be the first person to come to mind I think that this black gown which features cold shoulder and all over sheer embroidery0 would be one of her best red carpet looks ever. This very standard style of gown is elevated with all of it’s intricate embroidery which I think would help elevate Emily’s red carpet style. A sleek hairstyle, smokey eye, black clutch & black sandals would really bring this look together perfectly for Emily to rock on the TIFF red carpet.

Kristen Stewart is literally going to be EVERYWHERE over the course of the fall film festival season. I am hoping that Kristen will hit a stride with some killer looks over the course of the next few months. I have lost count of how many films that Kristen is going to be presenting at TIFF but the last one that I have a wish for is Certain Women. After for sure wearing Chanel at the premiere of Personal Shopper I am hoping that Kristen ventures away from the French couture house and shows us some variety on the TIFF red carpet. I think I would actually die if KStew showed up on the red carpet at the Certain Women premiere wearing this absolutely amazing Altuzarra Resort 2017 rust and black ensemble which features an asymmetrical black silk top and a pair of rust beaded sheer pants. This is the type of look that I think could mesh Kristen’s rock and roll persona and high fashion. I am hoping that Kristen finally gets rid of that terrible blonde hair with the worst roots, which is what she wanted, because that has been the downfall of many of her red carpet looks this year. A pair of black Christian Louboutin pointed toe pumps, a black Chanel clutch, edgy hairstyle, smokey eye, and red lip would perfectly finish this look off for Kristen.

I was super excited to see that Naomie Harris is going to be at TIFF to premiere her latest film Moonlight. I have been following Naomie since she first came on the scene as Moneypenny in the James Bond film Skyfall since then Naomie has really become a red carpet fashionista and her looks only continue to get better so I have high expectations for her at TIFF. I would love for Naomie to be the first to get her hands on Lanvin Resort 2017, the first collection designed by the labels new creative director Bouchra Jarrar. I think that Naomie would look incredibly gorgeous in this black Lanvin Resort 2016 gown which feature fall colored floral embroidery on a chiffon batwing blouse. Usually Naomie goes for modern glam looks so this very 30’s style gown would be an amazing change of pace for Naomie. A chic vintage inspired updo, nude lip, gold clutch, diamond drop earrings set in yellow gold, and a pair of black sandals would really set this look over the edge.

When she first burst onto the scene a few years ago Rebecca Hall was one that I couldn’t get enough of, but recently I have been less than enthused by her red carpet styles. I am hoping that returning to Toronto will bring back some of that magic that she had when she was out promoting The Town. At the 2016 Toronto International Film Festival Rebecca is expected to promote her latest film Christine. After a lot of blah looks I think that it is going to take a really major look for me to really care what Rebecca shows up wearing. This navy Schiaparelli Fall 2016 RTW one shoulder origami draped cocktail dress which features a crystal embellished bug broach detail. I think that this would put Rebecca back on the track of being high fashion. A classic but modern and slightly edgy style to help put her back in my good graces. A pair of gold sandals, a chic romantic wavy bob & a pink lip would really make this an A+ look. 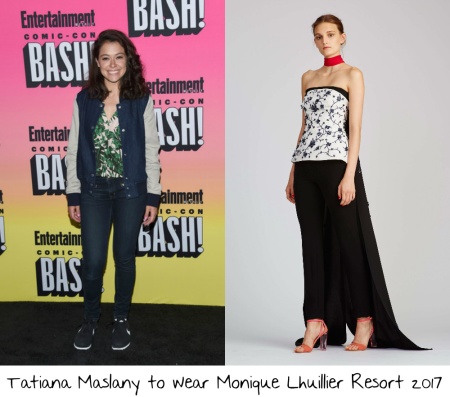 I had to save the most outrageous title of the 2016 Toronto International Film Festival for last. Two Lovers and a Bear has got to be one of the craziest titles that I have every heard of. I am hoping that the red carpet will be good. We have seen very little of Tatiana Maslany on the red carpet before and I am hoping we still get a change to know her a little more. I have learned that Tatiana has more of a tom boy style so I kept that in mind when picking a look for her to wear for the films TIFF premiere. I mixed tom boy with high glam with this Monique Lhuillier Resort 2017 ensemble which features a black and white strapless peplum bodice which features all over floral embroidery and tulle train and a pair of black high waisted straight leg pants. I think that Tatiana would look absolutely amazing on the TIFF red carpet in this look. It meshes her comfort zone while also stepping out of the box at the same time. I would take a cue from the lookbook styling and pair this look with a statement pair of sandals in any bold color. Finishing with a sleek ponytail, a pink lip (for all shoe colors except red where I would opt for nude and a light smokey eye,) and a black clutch would really make this a stand out look for Tatiana.