Every year the American Film Institute compiles a list of the 10 best movies and television shows of the previous year. This year this list is chock full of movies and television shows that have strong female performances and we are bound to see the stars of these films and shows on the red carpet of the AFI Awards luncheon red carpet on January 8, 2016. Brie Larson might be this seasons biggest underdog and the one to watch. I am really looking forward to seeing what the Room actress will be bringing to the red carpet. For this event I would love to see Brie wearing this white Bottega Veneta Spring 2016 RTW halter dress. This dress is such a chic and simple look which is perfect for a daytime luncheon. I am hoping that Brie continues to expand her repertoire of designers and this would be a lovely addition. Finish with a pair of simple nude sandals and fresh faced make up to finish this luncheon look off perfectly.

I can’t believe I am saying this but I was very underwhelmed by what Cate Blanchett brought to the red carpet last year. I think that this is the first time in a while where I haven’t had a single look from Cate gracing any of my end of the year awards. I am hoping that come awards season that Cate finds her footing again as she is set to be on every major red carpet this season. For the AFI Awards I would love to see Cate wearing this Roksanda Spring 2016 RTW ensemble which incorporates a simple sky blue silk blouse and pair of beige desert printed pants with sculptural detail in goldenrod on the right hip. I think that this look is something that many would not be able to pull of but the red carpet queen would have no trouble. This is the type of look that I think Cate needs to get me interested in her again, if she steps out in one more black Armani look I might cry.

I am super excited to see Charlize Theron on the red carpet this awards season. I know that she will undoubtedly be in Dior at all the big events but for some of the smaller event I am hoping that she will dig into some of the other brands that she tends to favor. For the AFI Awards I picked this incredibly chic black Jason Wu Spring 2016 RTW structured dress which features side cutouts and ruffles. I love how this look mixes classic sophistication with a fun flirtatious edge. Charlize knows how to take a simple look like this and make me fall head over heels in love with it. Something like the black Christian Louboutin ‘Bareta’ studded pumps, casual hair, a red lip, and a Dior clutch would ensure that Charlize slays this look at the AFI Awards. 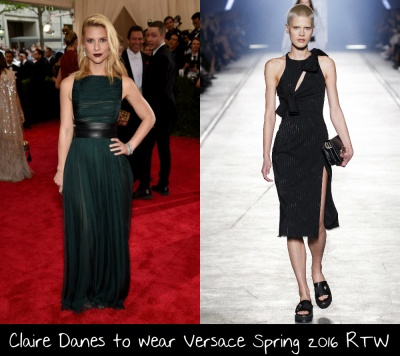 Claire Danes is another whom I usually love but in 2015 she really let me down. I am hoping that if she takes to the red carpet at the AFI Awards for her show Homeland that she will be back on form. To help her do so I picked a sexy borrowed from the boys type of look. This Versace Spring 2016 RTW black pinstripe dress is something that is sexy and sophisticated, perfect for the AFI Awards luncheon. I know that while some might be tempted to go all Angelina Jolie with their leg and that sexy slit, I know that Claire would keep it classy and just let the leg pop out the split naturally. Finished with a pair of simple black Jimmy Choo pumps and fresh faced makeup and Claire will be ready to hit the red carpet and work it like she hasn’t worked on in a long time.

If there was a fashion breakout star in 2015 it had to be Daisy Ridley who captured our hearts and the eye of many of the top designers. As she did such an amazing job while promoting Star Wars: The Force Awakens so I am sure that they will send her to the AFI Awards, where the film is being honored. Since Daisy has yet to double dip on designers I am continuing to expand her base by picking this black Etro Spring 2016 RTW ensemble which consists of a floral printed leather bodice and a tiered eyelet hem skirt. With the caliber of looks that Daisy has been putting out I could see many being bored with this type of look, but I think that the visual interest on the blouse is perfect for this type of more casual type of a red carpet. Finished with soft curls, a pink lip, and a pair of gold Christian Louboutin pointed toe pump and this is a perfect AFI Awards red carpet look.

Emilia Clarke was up and down last year and I am hoping that if she attends the 2016 AFI Awards to represent Game of Thrones that she starts the year on the right foot. What better way to do that than wearing this aqua blue Roland Mouret Spring 2016 RTW flared dress. Emilia is not one who is afraid of a bold color and since the AFI Awards are handed out during a luncheon this more laid back style is totally appropriate. The dress is classic and has a sense of flirtation with it’s flared skirt. I would just add a pair of gold Stuart Weitzman ‘Nudist’ sandals and a pink lip to finish this look off.