Continuing with today’s 2016 People’s Choice Awards wish lists I m going to continue with my wish for the stunning Kerry Washington. Kerry has always been one of my favorite ladies to see on the red carpet (she was another of the ladies who made it on to my Best Dressed of the Year list) and I am sure that she will slay the red carpet next Wednesday at the People’s Choice Awards (if she attends.) Nominated for Favorite Dramatic TV Actress, I would love to see Kerry wear this amazing multicolored floral Jason Wu Spring 2016 RTW halter dress. I love the flirty volume added to this dress by the amazing voluminous ruffles. This perfect look would be finished off with a pair of pink sandals and a gold Edie Parker clutch to make it just that much more elegant. 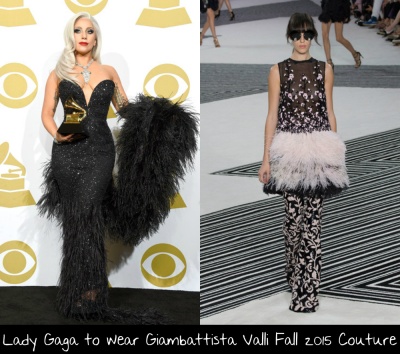 Not many women would be able to make couture work on the red carpet at the People’s Choice Awards but Lady Gaga is one of the few that could. Nominated for Favorite Sci-Fi/Fantasy actress thanks to her amazing work on American Horror Story: Hotel. At the close of 2015 it has been a lot of Brandon Maxwell (Gaga’s friend and stylist turned designer) on the back of Gaga and I am excited to see what she has in store for 2016. I think that Gaga would look amazing wearing this 3D floral embroidered Giambattista Valli Fall 2015 Couture ensemble which consists of a feather embellished tunic top and a pair of wide leg pants. This is a chic, edgy ensemble is perfect for Gaga who is about the only person that I can picture wearing this ensemble. A pair of platform sandals, chic updo, and a red lip would ensure that Gaga kills the red carpet at the People’s Choice Awards. 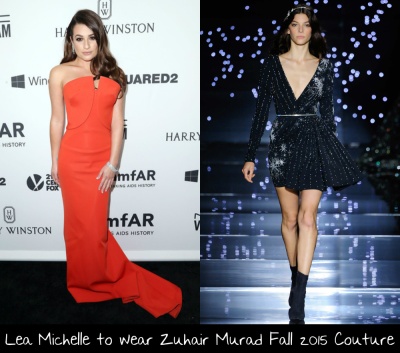 I am about over seeing Lea Michele on the red carpet but alas she is nominated for Favorite Actress in a New TV Series and is presenting at the People’s Choice Awards, so she will be on hand. I picked this long sleeve Zuhair Murad Fall 2015 Couture celestial embellished mini-dress for Lea because I feel like it is where she is with her red carpet style. A while ago I would have had wished for chic Elie Saab or Zac Posen moments but I don’t think that she is there anymore. Lea has potential to make for a major red carpet being but she has gotten lost. This would make for a very pretty look finished with a pair of black crystal embellished pumps and a red lip. 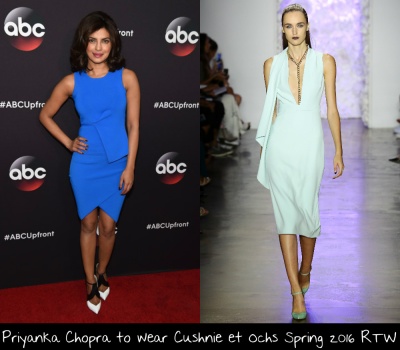 Like Lea, Priyanka Chopra is nominated at the People’s Choice Awards for Favorite Actress in a New TV Series and is presenting. Priyanka has started to make waves in the fashion world for her bold choices for the red carpet and I am really excited to see what she is going to bring to the table. I think that this mint blue Cushnie et Ochs Spring 2016 RTW silk shawl dress would be a chic elegant way for Priyanka to show up now that she has a following from her hit series Quantico. A pair of black and white Sophia Webster sandals to add a statement and a red lip will ensure that Priyanka kills the red carpet at the People’s Choice Awards. 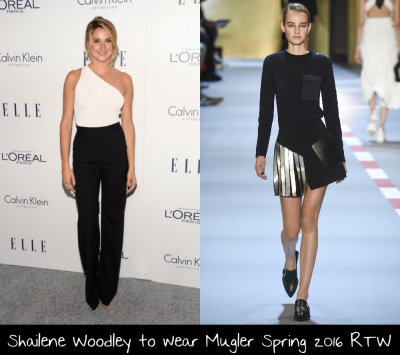 After wowing me in 2014 I was really surprised by how underwhelming Shailene Woodley was for me. I am hoping that 2016 will see her back on top form. At the People’s Choice Awards next week I would love to see Shailene, who’s nominated for Favorite Action Movie Actress, Mugler Spring 2016 RTW ensemble. I love that this ensemble, which consists of a navy blue sweater with a large pocket and military buttons down one sleeve and a navy metal embellished asymmetrical skirt, and I think that this gown would be event appropriate and fabulous. Shailene is not known for her feminine style and this look mixes femininity with a whole lot of edge. Finish the look with a pair of black and silver Giuseppe Zanotti pumps and simple hair and makeup and Shailene will work this red carpet.