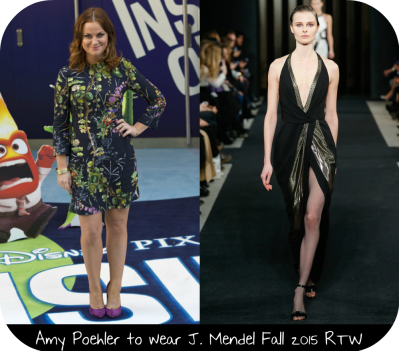 The comedy stars rarely hit high notes on the red carpet and I am not expecting much aside from that. Amy Poehler tends to stick to very basic looks on the red carpet and many of her looks are black. I picked this J. Mendel Fall 2015 RTW silk crepe gown which features a plunging neckline, high center split, and gold silk lame inserts for Amy to wear for the last Emmy Awards where she will be nominated for “Parks & Recreation.” Some people are predicting that Amy will walk away from this years ceremony with her first trophy for her last performance in the show, so Amy needs to make sure that she is on point. Finished with black peep toe pumps and a gold clutch and this look will be perfectly on point for the Emmy Awards red carpet.

Amy Schumer showed off her burgeoning red carpet chops as she promoted her latest film “Trainwreck.” I am interested to see what she will wear on the red carpet for the Emmy Awards. This will mark the first time that the funny lady will be on the red carpet at the Primetime Emmy Awards so I wonder if she will go big or go home, or will she stick to a simple look. Amy’s red carpet MO is usually short and tight, not the standard of dress for the Emmy Awards. I think that this red one shouldered Badgley Mischka Fall 2015 RTW flowing silk gown is a perfect red carpet ensemble for her first Emmy’s red carpet. I am having a battle with myself over whether or not that Amy should wear the gold bejeweled belt but I also think that disrupting a fluid silhouette would section Amy off and that just wouldn’t be a good look. A gold clutch, a pair of gold sandals, and a chic bun would finish this look off perfectly for Amy’s first Emmy Awards red carpet.

“VEEP” star Julia Louis-Dreyfus is Amy’s only real competition to take the Emmy Award home and set a major upset. Julia tends to stick to black on the red carpet and I think that she would be instantaneously drawn to this black Monique Lhuillier Resort 2016 with a high round racer shape neckline and an exposed back, a bead embroidered necklace that extends to the straps at the back, and a floor length fit and flare silhouette. Julia knows how to make these types of looks look anything but basic and I am sure that would be the case again. Styled with simple hair and makeup, a black clutch and black sandals and this simple look would be finished perfectly for the Emmy Awards red carpet.
I will be live tweeting this years Emmy Awards red carpet and telecast with Kelly from Dream In Lace on September 20. I hope you will follow me and Kelly on Twitter and join in on the conversation! I am excited as this is our awards tradition now, so pop your bubbly and join in the fun.