We haven’t had a major international promo tour this year so I am really excited to see the cast of “The Hunger Games: Mockingjay Part 1” jet set around the world to premiere the movie all around worlds most glamorous cities. Europe is where most of these premieres are going to take place, yesterday I posted my wish for the London world premiere of the film. Today I am focusing on what everyone should wear for the rest of the red carpet premieres throughout Europe. Up first if of course Jennifer Lawrence, the star and heroine of the film. All of the looks that I have pulled for JLaw to wear during this promo tour are exclusively Dior since she is the face of the brand. The first look is this stunning white tank and full tea length skirt from the Christian Dior Spring 2015 RTW collection. This is a perfect look for a city like Berlin where you can wear something slightly edgier. Pair this dress with a pair of Tom Ford suede half d’orsay pointed toe pumps in cloud blue with a gold spike heel and a wavy hairstyle would finish off this ensemble. The next is an avant garde Christian Dior Spring 2014 Couture high low gown. This gown is a statement perfect for Paris where the edge is expected. We have not seen Jen wear a lot of this collection, which surprises me because I think that it was the closest to her own personal style. Sleek slicked back hair and a pair of Gianvito Rossi black patent/PVC strappy ankle strap sandals would keep the focus on this gown perfectly. And last but not least is a glamorous Christian Dior Resort 2015 silk floral print gown. On a red carpet in Madrid I think that this gown would stand out as one of Jennifer’s best ever Dior ensembles. This mixes the sporty silhouette that works so well on JLaws body and the girly femininity that so often gets lost on her. Finish this look with a black Christian Dior leather evening bag and a pair of Christian Louboutin ‘Pina Spike’ sandals that feature a black patent toe and gold spike embellished heels to round out a trio of perfect red carpet looks for the European leg of the “Mockingjay Part 1” promo tour.

Following a fabulous run during festival season, and still promoting those films through awards season to come, I an really excited to see what Jena Malone is going to bring to the red carpet during the promo tour for “The Hunger Games: Mockingjay Part 1” throughout Europe. For Berlin, I have picked this black Ralph Lauren Spring 2015 RTW ensemble. The black long sleeve crop top sweater and silk chiffon evening skirt pair together to make a hard yet soft red carpet statement which are the type of looks that Jena wears the best on the red carpet. Finish the look with a pair of Christian Louboutin ‘Bille’ studded PVC pointed toe pump and a red lip to ensure that all eyes are on Jena and her attitude wearing this ensemble. When the film premieres in Paris I have picked yet another crop top evening look this one from the late Oscar de la Renta and his final collection for Spring 2015 RTW. This is more of a glamorous and ladylike approach to the red carpet and I think that since this stunning ensemble has an edge brought by the embellished crop top. I would create a simple wavy bob out of her standard pin straight locks, hand her a Marchesa ‘Iris’ floral embroidered box clutch, and throw on a pair of gold Christian Louboutin ‘Follies Resille’ glitter fishnet pointed toe pumps to complete the perfect look for a Parisian red carpet moment. And finally for Madrid I have picked this navy blue Valentino Spring 2015 RTW scoop neck gown that features sheer panels. This is the most elegant of the looks that I have picked for Jena to wear on this promo tour and even this has an edge via the sheer panels of the gown. A pair of Christian Louboutin ‘So Pretty’ suede pumps with laser-cut patent leather and glitter overlay, a Charlotte Olympia ‘Pandora’ perspex clutch inlaid with black lace, and another red lip would finish off a trio of perfect red carpet looks for Jena on this promo tour. 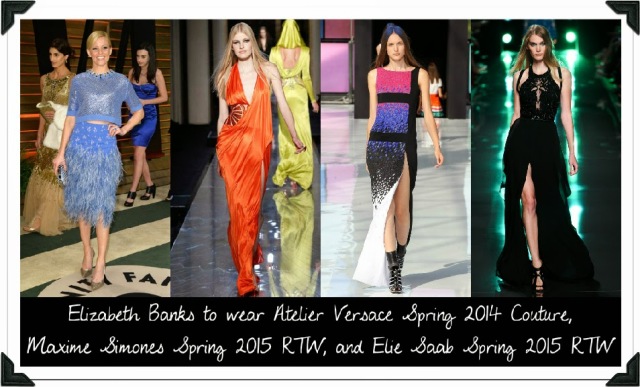 Elizabeth Banks is a pipe dream of the cast that I want to see take to the international red carpet since her character is minimal in the rest of the film series but she is one of the cast members that I love the most. For the past two promo tours Elizabeth Banks has worn an orange Atelier Versace creation at some point during the films promotions. I am hoping that she keeps this theme up again. I have picked this bright orange Atelier Versace Spring 2014 Couture draped, halston-eqsue, gown with a beaded waist would look stunning on Elizabeth at the Berlin premiere of the film. I kept the orange theme up quite literally with and Edie Parker ‘Jean’ clutch emblazoned with the images of orange slices, I think that this is a fun touch and the waist embellishments on the gown kind of elicit the same idea, and then added a pair of gold Charlotte Olympia ‘Tokyo’ sandals to finish off a fun bright ensemble. In Paris I want Elizabeth to embrace the ‘capitol’ side of her formerly colorful character wearing this colorful Maxime Simones Spring 2015 RTW black, white, pink, and blue shift gown. The color blocking and dot pattern is absolutely stunning and I think that Elizabeth has the presence to make this stunning gown a major moment on the red carpet. Keeping the colorful theme coming with another Edie Parker ‘Jean’ clutch, this one striped with pool blue, aqua blue, hot pink and silver, as well as a pair of aqua blue Giuseppe Zanotti patent leather ankle strap sandals would finish off this majorly modern bold red carpet statement. Last but not least is the simple black Elie Saab Spring 2015 RTW silk organza gown. The neck beading makes this look not boring but still classically elegant. Veronica Lake waves, a red lip, black and gold Edie Parker clutch, and a pair of sexy Christian Louboutin black sandals will finish this look off perfectly for a Berlin premiere.