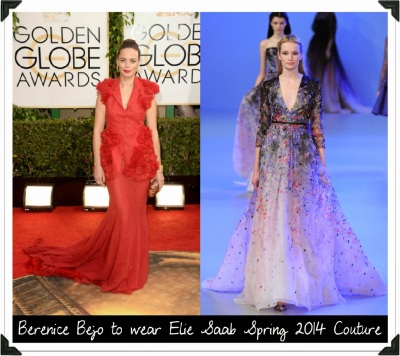 Berenice Bejo will take to the red carpet at the Palais de Festivals on Wednesday May 21st to premiere her film ‘The Search.’ Since her red carpet debut in 2011, I feel like I have said this a lot in the past few days, Berenice has been a staple in Cannes; premiering films or acting as the Mistress of Ceremonies. This year will be no different. At the Opening Ceremony of the film Elie Saab had two major moments on Paz Vega and Jane Fonda which has, I hope, just kickstarted a fabulous run for the designer during this festival. Berenice tends to pick gowns that look very sophisticated. Last year she picked a white Alexis Mabille Couture tulle ballgown that she paired with a belted blue double breasted blazer and for this year I am picking this Elie Saab Spring 2014 Couture micro floral print organza ball gown that features 3/4 length sleeves and a deep v. A tight big bun hair style on top of her head, a bright pink lip, a pink Edie Parker clutch, a pair of silver sandals, and of course a pair of dazzling Chopard diamond earrings will just add the perfect finishing touches to this red carpet look. 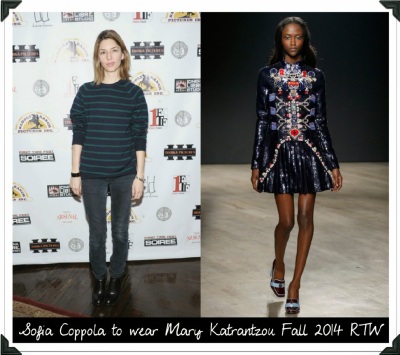 Sofia Coppola proved to me at the Opening Ceremony that even though I prayed to the fashion gods that I am most likely not going to see her step out of her comfort zone wearing an embellished Valentino black tunic and shorts. While I am still holding out hope that Sofia will rock something out of her norm I am conceding the gown wish. I picked this navy blue Mary Katrantzou sequin long sleeve trapeze dress with silver, white, red and lighter blur embellishments for Sofia to wear on the red carpet during Cannes. It is completely out of her realm of Valentino, Louis Vuitton, and Marc Jacobs labels and that is exactly what I am hoping for. She will pair this dress without a doubt her Sofia Coppola for Louis Vuitton clutch and a pair of all Black sleek wedges as per her norm but the dress itself is a statement in itself.