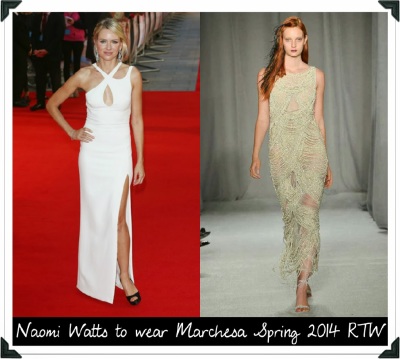 Naomi Watts did not give me the looks to blow me away that I was expecting her to do during her ‘Diana’ promotional tour. For her big night in London she wore a bland wrinkled Versace white gown that she paired with boring black pumps. For the London Film Festival, I would love to see Naomi wear this draped fringe Marchesa Spring 2014 RTW cream gown for the premiere of her latest film ‘Adore’. These two have had a wonderful relationship in the past (Naomi even kind of redeemed her Versace disaster with a Marchesa dress at the ‘Diana’ premiere in Australia) and I am expecting that there will be several more wow moments in the future. I am in love with this dress, one of two gowns that I am in love with from this collection both I want to see on Naomi. Complete this look with a gold Kotur clutch, a simple pair of gold pumps, and a 20’s inspired faux wavy bob and I think that Naomi would have a winning look on her hands for the London Film Festival.

Post divorce from ex-husband Sean Penn I have to say that Robin Wright, who used to look stunning in Elie Saab, Narciso Rodriguez, and Chanel, but lately its been mostly black gowns and frumpy styles. Robin is a hot, SINGLE, woman who should be telling Sean Penn to eat his hart out but she is not. I am not going to try and be hopeful but logical with my wish for her to wear for the 2013 London Film Festival. I think that this simple black Ralph Lauren Resort 2014 sleeveless gown is perfect for the blonde pixie haired star. I am not sure what else to say. The dress is simple but pretty. I would take a cue from the runway and pair this dress with a statement making diamond cuff and add a black Edie Parker clutch and a pair of black Christian Louboutin peep toe evening pumps to complete this look and boost it from just another black gown.